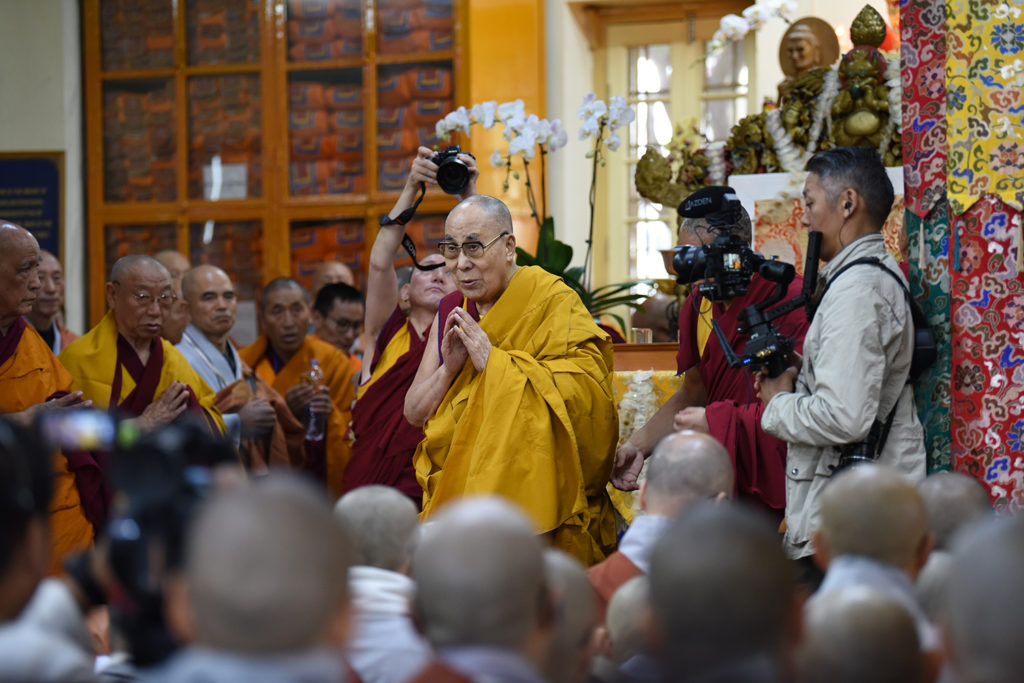 His Holiness the Dalai Lama greets devotees at the start of the final day of His Holiness’ teachings at the Main Tibetan Temple in Dharamsala, HP, India on November 6, 2019. Photo/Tenzin Jigme/CTA

Dharamshala: His Holiness the Dalai Lama concluded the three-day discourse on Heart Sutra for the Korean devotees. More than 6000 people had gathered to listen to him, of whom more than 2000 had come from 60 countries around the world. Principal among them were people from South Korea, who filled the temple.

In the temple, proceedings began as usual with monks from Thailand reciting the ‘Mangala Sutta’ in Pali. They were followed again today by a group of Korean nuns who chanted the ‘Heart Sutra’ in Korean following the steady beat of a ‘moktak’ wooden fish.

His Holiness addressed the gathering. “Here we have monks from the Theravada tradition and Korean dharma brothers and sisters, who follow the Sanskrit tradition. All of us are followers of the same Gautama Buddha. Buddhism spread across Asia from India to Sri Lanka, Burma, Thailand, Laos and Cambodia, to China, Korea, Japan and Vietnam. It was also carried to Nepal and Tibet, Mongolia and the Russian republics of Kalmykia, Buryatia and Tuva.

“There are many religious traditions in the world, all of which advocate the practice of love, patience, tolerance, contentment and self-discipline. Their many followers have benefited from this. What makes Buddhism different is its philosophical stance. Buddhism doesn’t assert a creator god. The Buddha told his followers, “You are your own master.” What happens to you is a result of your own actions.

“The attainment of liberation and omniscience is not about something outside you. It’s about your transforming your own mind. When you free yourself from karma and delusion, you attain liberation. Defilements of the mind can be overcome. Their residual stains can be eliminated, enabling you to see everything as it is.

“As traditional followers of the Buddha we can feel fortunate to have been born in places to which the Buddha’s teaching has spread and flourished. However, simply keeping our faith and reverently reciting the ‘Heart Sutra’ is not sufficient. We need to study and think through what the Buddha taught. Buddhist teaching includes a thorough understanding of the workings of the mind and emotions that we can only take advantage of if we study. Whenever I have the time, I continue to read and study.

“Listening to teachings is good, but we have to reflect on what we hear and then meditate on what we’ve understood. I would like to send a message through you to your friends elsewhere about the importance of study. Once the teachings are over today, you’ll all disperse in different directions, but we’ll still be together in spirit. I won’t forget you.”

His Holiness declared that the main aim of the Buddha’s teaching was the attainment of liberation and omniscience. He clarified that he feels uncomfortable using the terms Hinayana and Mahayana—lesser vehicle and greater vehicle—preferring to refer to the Pali tradition and Sanskrit tradition instead. He said he likes to have Theravada monks open the teachings with their recitation because it serves as a reminder that the Pali tradition came first.

As Buddhism developed, its scholars worked in Sanskrit, leading eventually to the Nalanda Tradition. The essence of the Sanskrit tradition is the awakening mind of bodhichitta.

“There is aspiring bodhichitta and engaging bodhichitta,” His Holiness clarified. “Jé Tsongkhapa says bodhichitta is the foundation of all great practice. Without it you can’t cultivate the omniscient state of a Buddha. Even if you have acquired a correct view of emptiness, without bodhichitta you won’t be able to eliminate cognitive obscurations. On the other hand, if you cultivate bodhichitta it will be a source of great and wholesome merit.

“Bodhichitta is the core of a bodhisattva’s practice. It brings peace of mind, which in turn brings good health. Shantideva describes bodhichitta as leading to bliss and asks:

Mounted on the horse of bodhichitta,
Which puts to flight all mournful weariness,
What lucid person could be in despair
Proceeding in this way from joy to joy?

And so, today, within the sight of all protectors,
I summon beings, calling them to Buddhahood.
And, till that state is reached, to every earthly joy!
May gods and demigods and all the rest rejoice!

“Today, we’ll develop aspiring bodhichitta. The bodhisattva vow involves avoiding 18 primary and 46 secondary downfalls. The main practice is to cherish others more than yourself. If you can do that, you’ll be able to keep the rest of the vow.”

In the course of conducting the bodhichitta ceremony, His Holiness discussed the difference between the general structure of the Buddha’s teachings and the specialized instructions like tantra. At the end, he urged the members of the audience to encourage their friends to be warm-hearted too.

He briefly explained that he is committed to promoting love and compassion as a source of human happiness. Similarly, he’s dedicated to encouraging inter-religious harmony. He is also committed to keeping Tibetan religion and culture, derived from the Nalanda Tradition, alive, as well as to reviving ancient Indian knowledge in modern India.

He brought the teaching to an end with a resounding, “See you next year.” 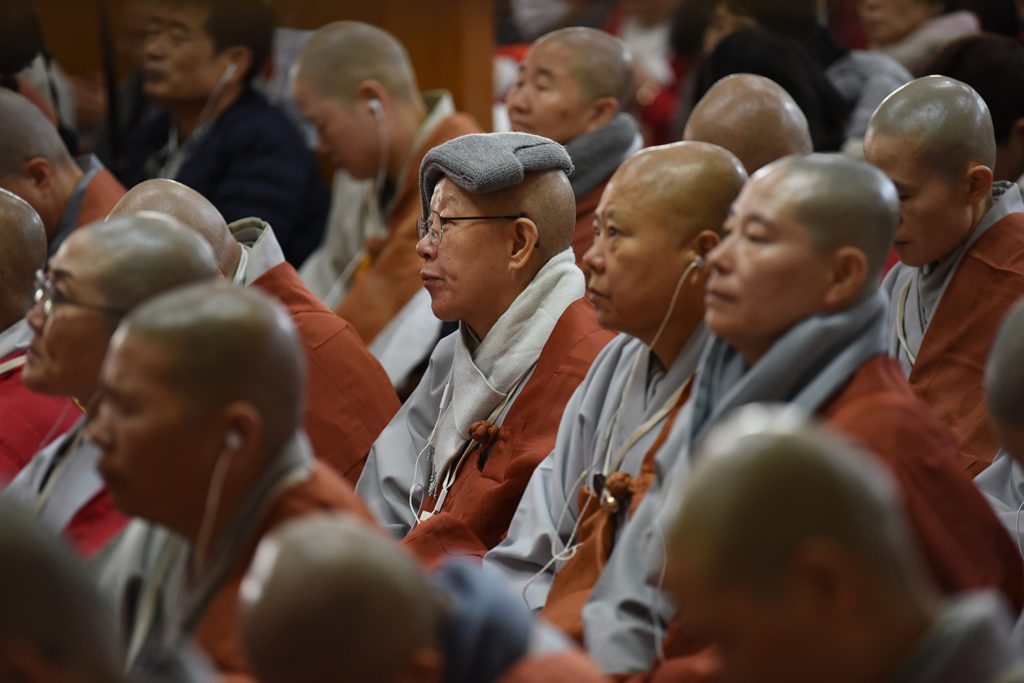 Korean nuns on the final day of His Holiness the Dalai Lama’s teachings requested by a group from Korea in Dharamsala, HP, India on November 6, 2019. Photo/Tenzin Jigme/CTA 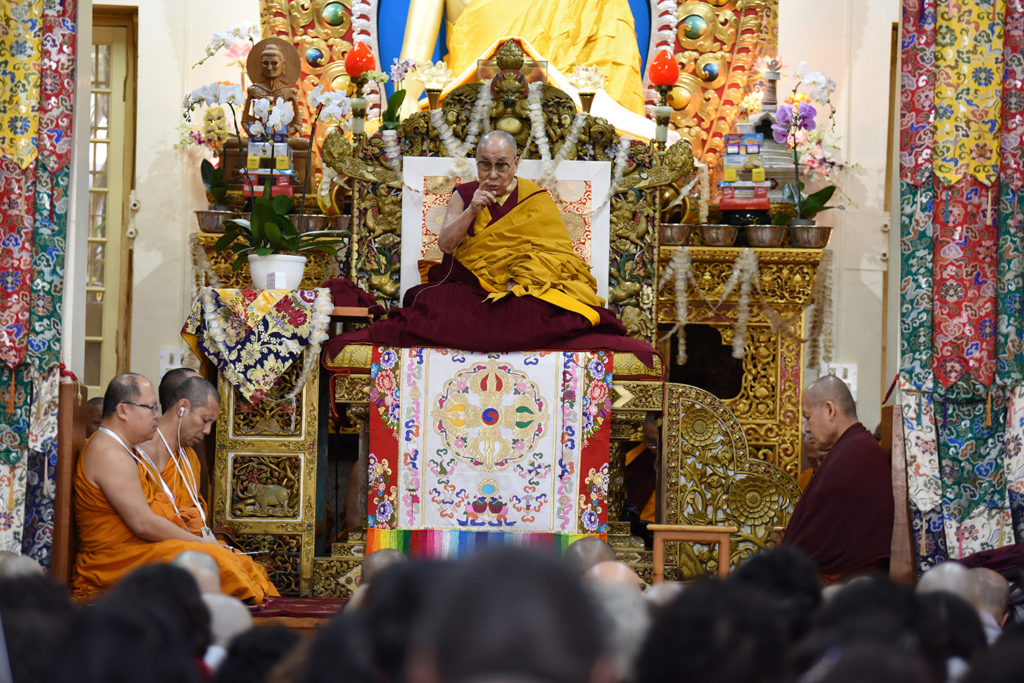 His Holiness the Dalai Lama ON the final day of His Holiness’ teachings at the Main Tibetan Temple in Dharamsala, HP, India on November 6, 2019. Photo/Tenzin Jigme/CTA