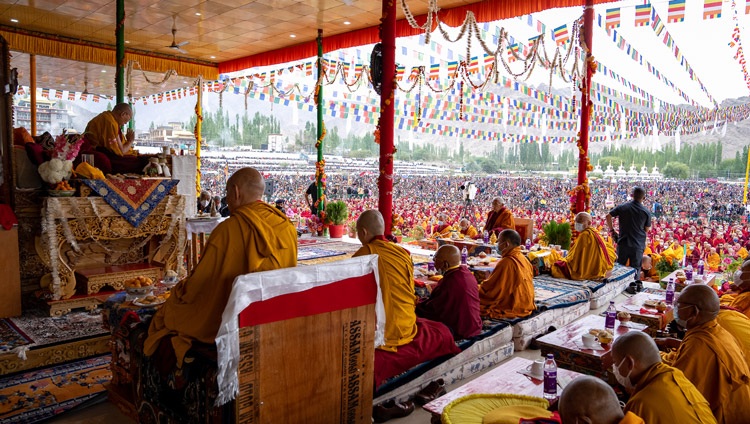 His Holiness the Dalai Lama performing the necessary procedures prior to bestowing the empowerment of Avalokiteshvara at the Shewatsel Teaching Ground in Leh, Ladakh, UT, India on July 30, 2022. Photo by Tenzin Choejor.

Leh, Ladakh: An estimated 70,000 people gathered at Shewatsel Teaching Ground in Leh for Avalokiteshwara empowerment to be bestowed by His Holiness the Dalai Lama on Saturday, 30 July.

As Avalokiteshvara or Chenrezig has a special connection with the people of Tibet and the Himalayan region, His Holiness directed the audience to recite six-syllable mantra—Om mani padme hung—while he performed the rituals necessary for him to give the empowerment.

His Holiness remarked that, although it might seem presumptuous for him to say so, he could be regarded as representing Avalokiteshvara in his actions of body, speech and mind. He declared that all major religious traditions encourage their followers to appreciate the importance of ‘karuna’ or compassion, leading to their acting in the service of others rather than just looking after themselves.

“Indeed,” he added, “if we dedicate ourselves to the welfare of others, we will incidentally fulfil our own goals.”

On behalf of the congregation, His Eminence Thuksé Rinpoché of the Drukpa Kagyu lineage of Tibetan Buddhism, offered the customary mandala to His Holiness, following which other representatives presenting him with silk scarves. The ‘Prayer of Three Continuous Practices’ was chanted, followed by a recitation of the ‘Heart Sutra’. 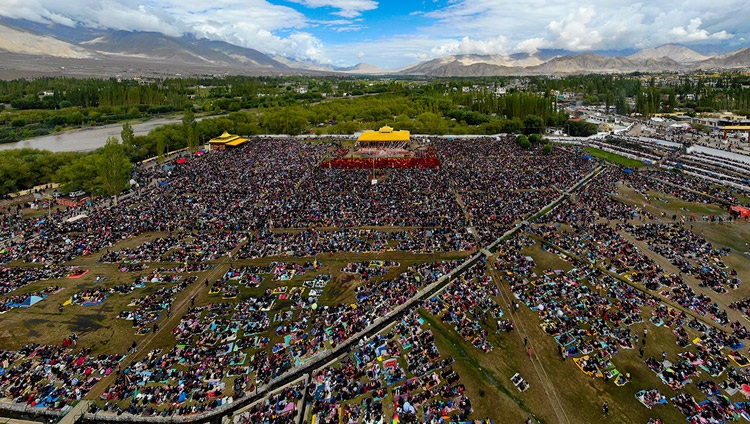 His Holiness informed the public that the Avalokiteshvara empowerment he was going to give belonged to the Action Tantras (Kriya Tantras), which emphasise clean outer conduct. He advised them to receive it with the intention of leading a meaningful life, in other words, cultivating a warm heart and working for the welfare of all sentient beings.

Prior to the actual empowerment, His Holiness led those gathered before him through the steps for generating the awakening mind.

“The final goal,” he told them, “is the attainment of enlightenment, and to reach it we must combine the awakening mind, which constitutes the method aspect of the path, with an understanding of emptiness, which comprises the wisdom aspect of the path. We need to keep both these aspects of the path in mind and train ourselves to cultivate the path to enlightenment in life after life. In my own case I reflect on the awakening mind of bodhichitta and the wisdom understanding emptiness the moment I wake up every morning.” 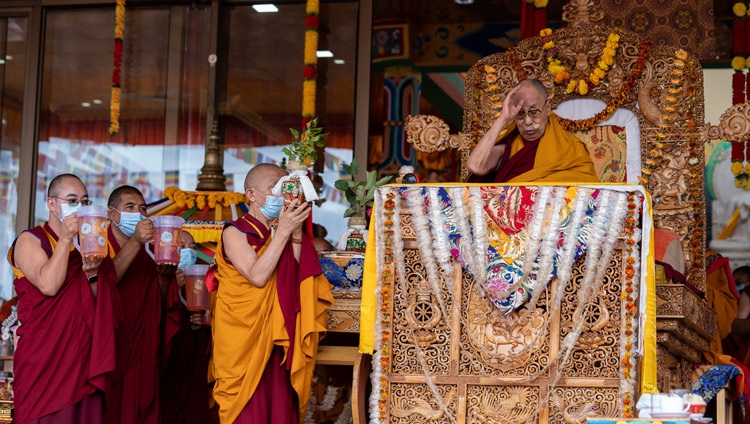 His Holiness the Dalai Lama bestowing the Avalokitshvara Empowerment at the Shewatsel Teaching Ground in Leh, Ladakh, UT, India on July 30, 2022. Photo by Tenzin Choejor.

Once he had completed the empowerment, His Holiness advised everyone who had received it, both those seated before him and those elsewhere who had followed the instructions over the internet, to recite the six-syllable mantra of Avalokiteshvara ten thousand times or to say it at least several thousand times a day, which, he assured them, would bring them peace of mind.

Before the proceedings came to an end, Thiksey Rinpoché led a ceremony of prayers for His Holiness’s long life. A large number of people representing various organisations, institutions and regions of Ladakh took part in the procession to present offerings to His Holiness. In addition, a group of Ladakhi artists performed a beautiful song our of gratitude to His Holiness.

The three-day series of teachings was concluded as Acharya Stanzin Wangai, President of the Ladakh Gompa Association, and several other representatives, offered a thanksgiving mandala offering.

His Holiness made a point of waving to members of the audience seated to the north, east and south of the stage before returning to his residence in an open golfcart from which he was clearly visible smiling and waving at the people he passed. 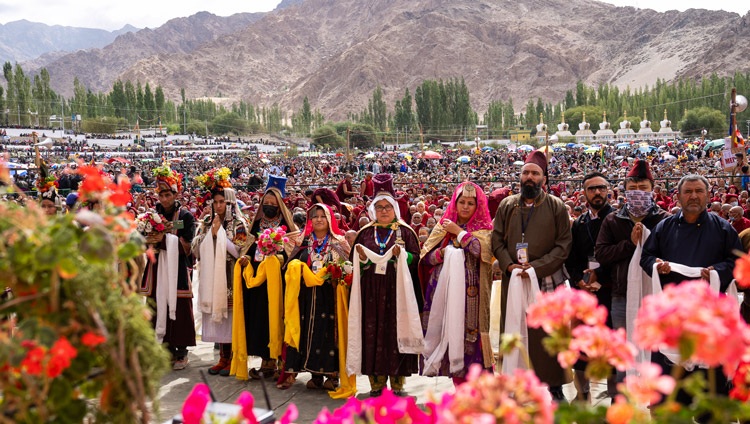 Members of the Ladakhi community performing a song for during the Long Life Offering prayers for His Holiness the Dalai Lama at the Shewatsel Teaching Ground in Leh, Ladakh, UT, India on July 30, 2022. Photo by Tenzin Choejor.