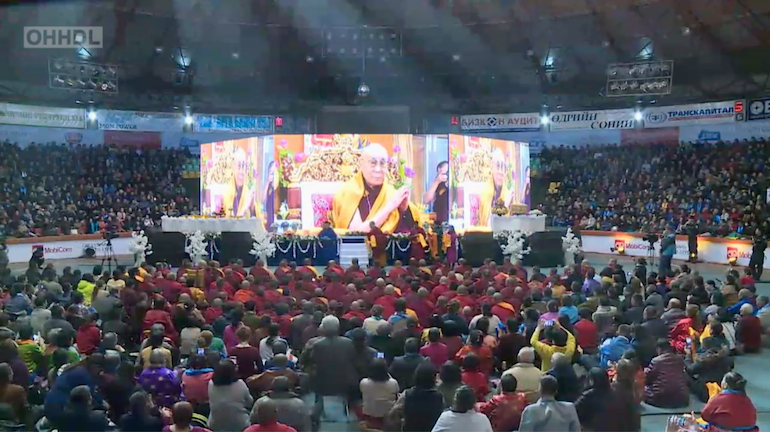 His Holiness the Dalai Lama begins teaching on Je Tsongkhapa’s ‘Concise Stages of the Path’ and ‘In Praise of Dependent of Origination’ through live teleconference participated by Buddhist groups from Mongolia on Thursday, 28 February 2019.

Dharamshala: His Holiness the Dalai Lama gave teachings on Je Tsongkhapa’s ‘Concise Stages of the Path’ and ‘In Praise of Dependent of Origination’ through a live teleconference participated by Buddhist groups from Mongolia on Thursday, 28 February.

In the two-hour teaching course, His Holiness the Dalai Lama celebrated the centuries-old friendship and spiritual bond shared by the previous Dalai Lamas and the emperors of Mongolia.

His Holiness said the title Dalai Lama by which He is referred and renowned worldwide was offered by Mongolian King Altan Khan to the Third Dalai Lama Sonam Gyatso.

“In 1578 the Mongol ruler Altan Khan gave the title ‘Dalai Lama’ to Sonam Gyatso, the third Dalai Lama. The title means ‘Ocean of Wisdom’ and He was the first Dalai Lama to be called by that title,” His Holiness said. “The word ‘Dalai’ has otherwise no meaning in Tibetan.”

The spiritual bond was further deepened when the Fourth Dalai Lama, Yonten Gyatso, took birth in Mongolia to the Chokar tribal chieftain Tsultrim Choeje, who was the grandson of Altan Khan.

“Similarly, during the time of the Fifth Dalai Lama, Tibet was in the midst of a political turmoil. It was due to the initiative of Gushir Khan, the chief of the Qoshot Mongols that the situation was brought under control. As a result, in 1642, the Fifth Dalai Lama was enthroned as both spiritual and political leader of Tibet.”

“Furthermore, In 1904, the 13th Dalai Lama, Thupten Gyatso, travelled to Mongolia to give teachings and he had a very good command over Mongolian speech.”

His Holiness recounted a short anecdote from the time of the 13th Dalai Lama, which was shared by his mentor Ngodup Tsognyi who also hailed from Mongolia.

He added, “As for Tibet and Mongolia, we have had close relations for well over 1000 years. Both peoples uphold the practice of Buddhist lineage as introduced by the great Nalanda masters.”

In the past, His Holiness said, Mongolians studying in the monasteries in Tibet were all dedicated students of philosophy. “When I was studying in Lhasa, I had 17 debating assistants selected from the colleges of Drepung, Ganden and Sera Monasteries. Among them, the best, and personally, the most influential, was Ngodup Tsognyi who came from the Abak region of Inner Mongolia.”

His Holiness named several prominent Mongolian scholars who practiced in Tibet: the Abbot of Gomang Sogpo Lekden; the Abbot of Gyumey Sesshin Ka; Vinaya Abbot Thubten Nyima; and Sogpo Yeshi, one of the companions during His Holiness’ Geshe Lharampa exam.

“These were the last Mongolian scholars to have come to Tibet. Today in exile, we have several hundred Mongolian monk students studying in Tibetan monasteries,” His Holiness said.

Asking his Mongolian devotees to become 21st century Buddhists, His Holiness said sound faith is based on knowledge and reason. “Follow and practice Buddhist teachings on the basis of sound understanding and through studying the classic texts composed by Nalanda masters.”

The teaching will resume tomorrow. 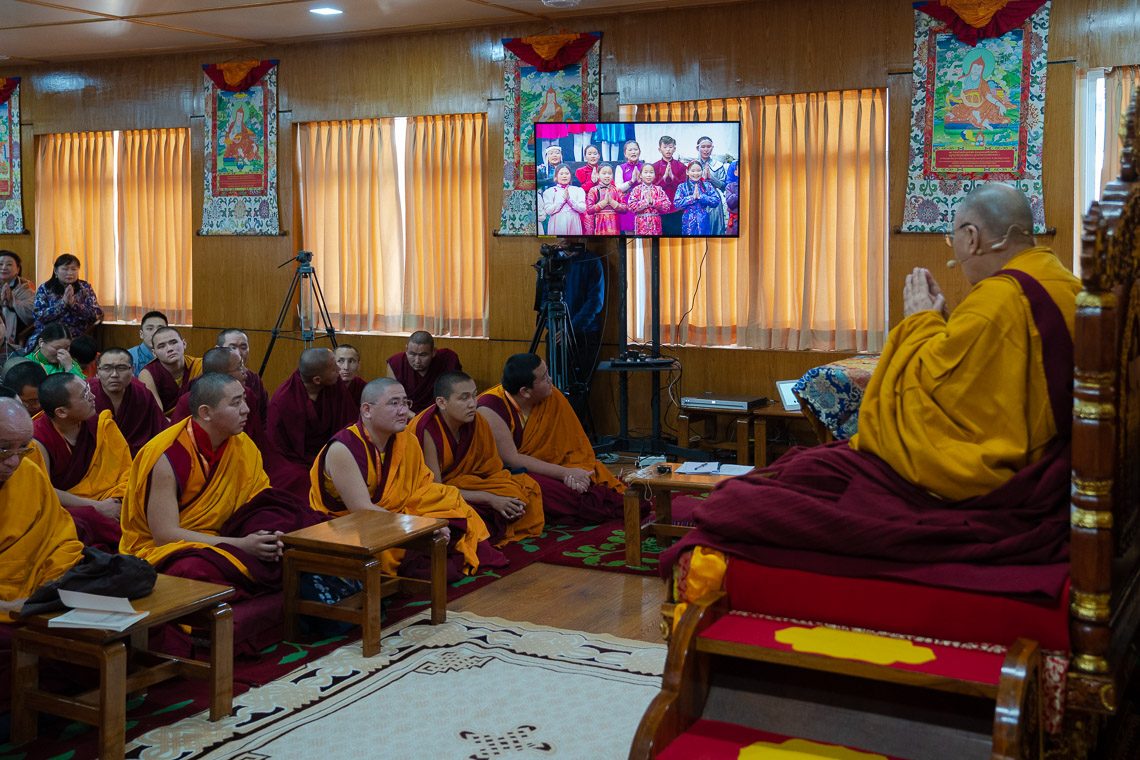 His Holiness the Dalai Lama watching a group of children singing live via video link from Mongolia at the conclusion of his teaching at his residence in Dharamsala, HP, India on February 28, 2019. Photo/Tenzin Choejor/OHHDL 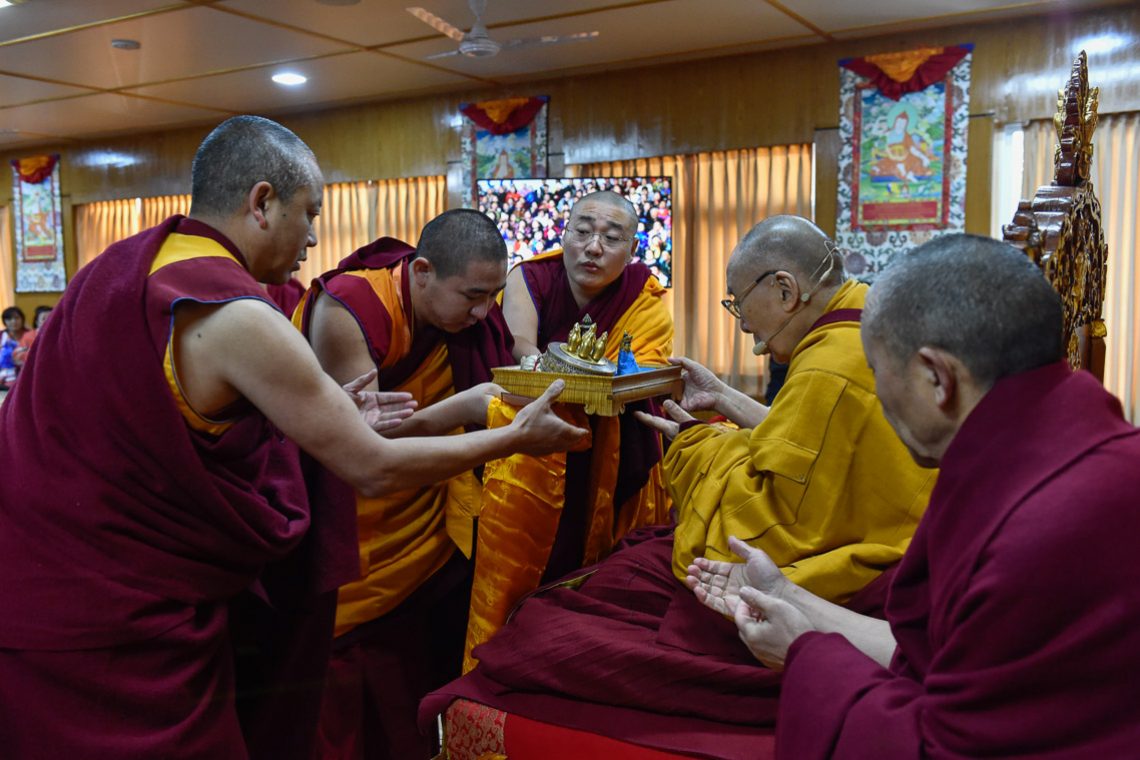 Lamed Gegen Rinpoche making traditional offering to His Holiness the Dalai Lama at the start of the teachings for the Mongolian Buddhists at His Holiness’ residence in Dharamshala, 28 February 2019. Photo/Tenzin Damchoe/OHHDL