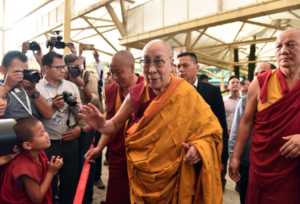 His Holiness the Dalai Lama greets the devotees at the courtyard. Photo/Tenzin Phende/CTA

Dharamshala: His Holiness the Dalai Lama begins three-day teachings in Dharmashala on the Four Noble Truths and their Sixteen Characteristics, the Thirty-Seven Factors of Enlightenment as well as Nagarjuna’s “Commentary on Bodhichitta as requested by a group from Asia at Tsuglagkhang, Main Temple.

His Holiness on his arrival warmly greeted the devotees gathered at the courtyard as he proceeded towards his seat on the throne while ‘Heart Sutra’ was being chanted until it subsided once His Holiness settled down on the throne.

His Holiness in his preliminary remarks illustrated that Buddhism in the South East Asian country has somewhat become a traditional religion as he acknowledged the keenness and interests of the devotees who have been coming to attend the teachings for some time now. His Holiness then thanked the organisers and began deliberating on the discourse of dharma. 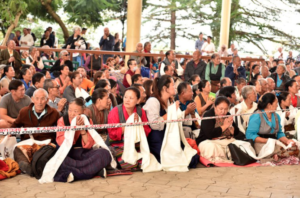 Devotees gathered at the courtyard for the first day teaching of His Holiness the Dalai Lama. Photo/Tenzin Phende/CTA

His Holiness further asserted that love should be promoted as the very power of love and affection has helped nurtured and sustained the living beings on earth when the world first came into being.

“For the survival of us human beings, of course, love and affection are very important as we were nurtured and raised by the same love and care from our mothers”, said His Holiness the Dalai Lama. 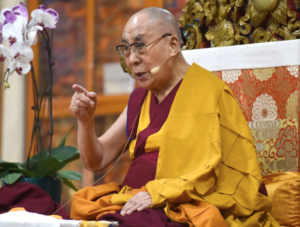 His Holiness commenting on love and compassion as the main message of all religious traditions. Photo/Tenzin Phende/CTA

Having said that, His Holiness also admitted that the need for different religious traditions in someway is necessary because of the existing different circumstances and conditions that humans live in which has nurtured and characterised different interests and nature of the beings. His Holiness mentioned that even Buddha himself implored the same in view that within Buddhisms also exists the different school of thoughts meant for the followers of different pre mental dispositions. Buddha took upon himself to teach all his followers without any bias.

Religious Harmony to His Holness the Dalai Lama is a new concept that he said he learned only after arriving in exile as back in Tibet religious harmony or understanding good relations between different religious traditions were not required. However, after noticing the amount of focus generated on material development, His Holiness affirmed that it was crucial people pay more attention to the development of mind.

The first day of His Holiness’s teaching was attended by more than 5000 devotees from 67 countries. Beginning tomorrow, His Holiness will accord detail teachings on Four Noble Truths and their Sixteen Characteristics, the Thirty-Seven Factors of Enlightenment as well as Nagarjuna’s “Commentary on Bodhichitta. The translation of the teaching is available in English and other European and Asian languages. The three-day teachings will conclude on 6 September 2019. 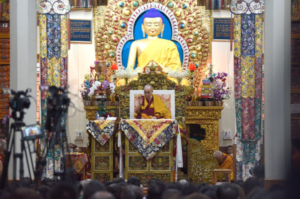 His Holiness the Dalai Lama during the teaching. Photo/Tenzin Phende/CTA 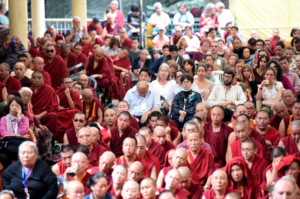 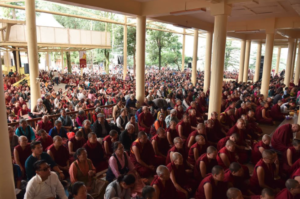