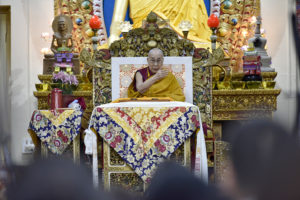 His Holiness the Dalai Lama during the first of the three-day teachings on Tsong Khapa’s The Three Principal Paths (lamtso namsum) & The Furthest Everlasting Continuum at the main temple. Photo/Tenzin Jigme/CTA

There were around 1100 people from Russia and 5195 people from 70 different countries and more than 2000  Tibetan people who have gathered at the courtyard to attend the teaching. The translations of the teaching were made available in 12 languages.

In the past, His Holiness gave teaching for the Russians in Delhi and similarly It was also arranged at Riga in Latvia for some years,

However, due to His Holiness recent illness, the teaching was arranged in Dharamshala.

His Holiness the Dalai Lama mentioned how Buddhism originated from India to Tibet and from Tibet to Mongolia. His Holiness further mentioned how the 33rd king of Tibet, Songtsen Gampo after marrying the princess of China, brought back a Buddha statue to Tibet and where began Buddhism in Tibet. He explained how the Buddhism of Tibet derives almost wholly from the tradition of Nalanda University. He spoke of the great abbot Shantarakshita’s coming to Tibet at the invitation of the Tibetan Emperor Trisong Dhetsen and his establishment of monastic ordination, the translation of Buddhist scriptures and the study of Buddhism.

His Holiness the Dalai Lama also mentioned about the Sanskrit and Pali traditions of which Pali tradition is the foundation of Buddhism. His Holiness explained that Tibetan Buddhism includes a complete range of Buddha’s teachings. It is founded on the monastic discipline of the Vinaya that is essentially the same as that upheld in the Pali tradition.

His Holiness further emphasised on the Nalanda’s tradition of Logic and reasoning.

“One’s mind cannot be controlled or monitored through prayers in Nalanda Tradition but somehow it teaches to do so through reasoning and logic” affirmed His Holiness.

His Holiness necessitated that Reasoning and Logic are needed to study psychology and to determine the for the working of the mind. He hinted that the source of our problems is self-centeredness and Buddhism has the ability to reduce self-centredness by focussing on selflessness, the lack of a single, autonomous self. 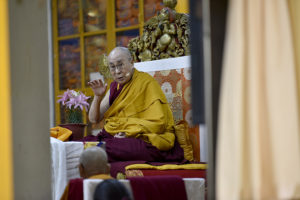 His Holiness the Dalai Lama informed that in the past there were many great masters who came from Buryat, Kalmykia, and Tuva to study in Central Tibet who later became accomplished. His Holiness further talked about the great legacies, great writings and commentaries by the great scholars.

Elaborating on the spread of Buddhism in the Mongolian Region including the Russian Republic, His Holiness said that there are many authors from inner and outer Mongolia  He said one main influential master of Madhyamika was Ngodup Choknyi, who was the assistant in training debates.

His Holiness further urged the audience to experiment Buddhism through logic rather than simply praying blindly.

“Just as a goldsmith would test the gold by burning, cutting and rubbing it”, His Holiness encouraged to experiment and analyze Buddhisms.

His Holiness equated Buddhism to Modern science and said that the age of information technology where many pieces of information are exchanged, the rise in the interests of studying Buddhisms is highly visible.

His Holiness encouraged the gathering to be a 21st-century Buddhist who are able to understand the unique Buddhist philosophy which is compatible with modern science.

Reflecting on the problems in today’s world, His Holiness the Dalai Lama advised practicing nonviolence which comes from having a compassionate heart.

His Holiness further said that the writings of Nalanda Masters and the commentaries written by Tibetan or Mongolian Masters are not just content of religious matter rather one can use them as a reference in academic subjects as well.

His Holiness also spoke on the three turning of wheels and how it has to be learned in sequence.

His Holiness then advised the audience participating in the afternoon session headed by Yangten Rinpoche to make it some sort of a discussion class rather than just listening from the teacher.

His Holiness the Dalai Lama’s  teaching will resume tomorrow. 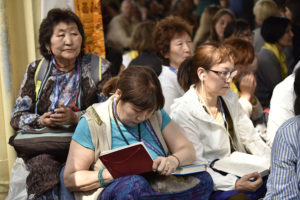 Members of audience at the teaching at main temple. Photo/Tenzin Jigme/CTA 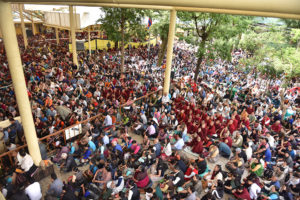 Audience for the teaching of His Holiness the Dalai Lama at the main temple today. Photo/Tenzin Jigme/CTA