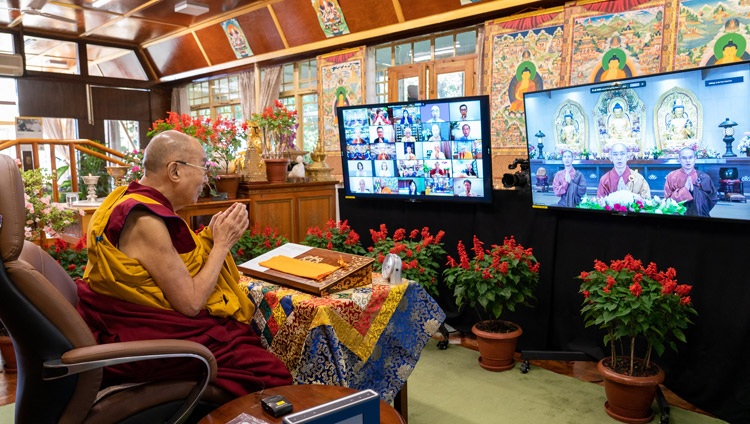 Monks in Taiwan chanting the ‘Heart Sutra’ in Chinese at the start of His Holiness the Dalai Lama’s online teachings from his residence in Dharamsala, HP, India on October 9, 2021. Photo by Ven Tenzin Jamphel

Thekchen Chöling, Dharamsala, HP, India – As soon as His Holiness the Dalai Lama came into the room from where he engages in online conversations today, monks in Taiwan began to chant the ‘Heart Sutra’ in Chinese. Following their recitation, Mr Chung Chih welcomed His Holiness on behalf of the Organizing Committee. He reminded His Holiness that the main disciples of today’s teaching were Taiwanese and Chinese. Many of them belonged to the Bliss and Wisdom Organisation founded by the late Bhikshu Tenzin Jamchen, who used to bring many faithful disciples to Dharamsala. Chung Chih assured His Holiness that all these students take his advice and instruction seriously as they strive to study and meditate.

His Holiness responded that he was happy to see his Dharma friends from Taiwan online today. He remarked that from the point of view of the Dharma relations between guru and disciple will also continue in future lives.

“Today, I’m going to explain Jé Tsongkhapa’s ‘In Praise of Dependent Arising’,” he confirmed. “But first I’d like to give you a short introduction.

“Buddha Shakyamuni appeared in India more than 2500 years ago. He manifested in order to teach rather than perform miracles and advised his disciples, ‘You are your own master. Whatever you experience depends on the nature of your own actions.’ He encouraged them to learn to train their minds. He showed what is to be adopted and what is to be rejected. This results in ascending the paths and grounds.

“The Buddha saw that there was no other way for him to help beings. He taught the Four Noble Truths, explaining their nature, function and result. Why did he do so? Because none of us wants to suffer. We all want to be happy. He taught that happiness and suffering come about through causes and conditions. They don’t occur by chance.

“Advising his disciples that they needed to know suffering, he explained the suffering of suffering, the suffering of change and the suffering that comes about due to pervasive existential conditioning. If we are to be free of suffering, we first have to understand what it is. It doesn’t arise without causes and conditions, nor is it dependent on external factors. What really gives rise to suffering is having an unruly mind creating karma and mental afflictions that in turn produce pain and pleasure.

“Since we wish to be happy, the Buddha explained the need to seek out the causes of happiness and to put them into effect. The question that then arises is whether we can fully overcome suffering. And in response the Buddha taught that the true cessation of suffering and its causes can be achieved. This is a teaching unique to the Buddha. Because true cessation can be attained, karma and mental afflictions can be overcome. This is the nature of liberation. 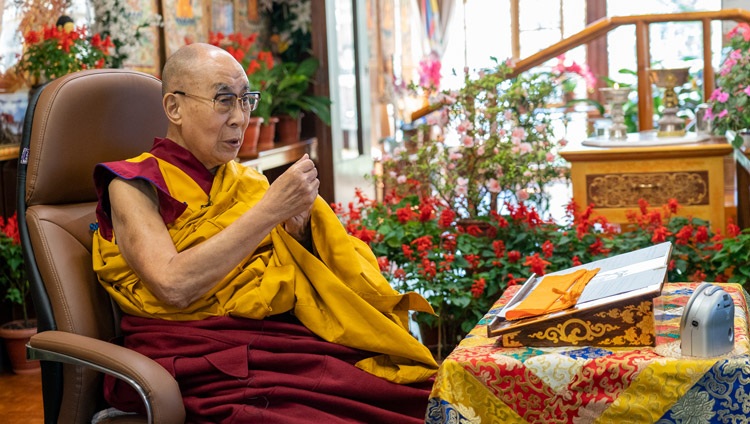 His Holiness the Dalai Lama addressing the virtual audience on the first day of his online teachings from his residence in Dharamsala, HP, India on October 9, 2021. Photo by Ven Tenzin Jamphel

“In his ‘Root Wisdom of the Middle Way’ Nagarjuna writes:

“Understanding of emptiness undermines fundamental ignorance about the nature of things. Elsewhere in the same text Nagarjuna declares:

“That which is dependently arisen
Is explained to be emptiness.
That, being a dependent designation,
Is itself the middle way. 24.18

“One of the clearest explanations of Nagarjuna’s view is Chandrakirti’s ‘Entering into the Middle Way’. Verses at the end of chapter six describe the bodhisattva, illuminated by the light of wisdom, seeing as clearly as a gooseberry on his open palm that the three realms in their entirety are unborn from the very start, and through the force of conventional truth, he journeys to cessation.”

Chandrakirti indicates the logical absurdities that would arise if things existed inherently. If the inherent characteristics of things were to arise dependently, things would come to be destroyed by denying it, which is illogical. When such phenomena are analysed, nothing is found as their nature apart from suchness. Therefore, the conventional truth of the everyday world, which exists merely by way of designation, should not be subject to thorough analysis.

When, through the kindness of my lamas, I saw
this unsurpassed vehicle of yours, leaving behind
extremes of existence and non-existence,
elucidated by the prophesied Nagarjuna,
his lotus grove illuminated by the moonlight
of the glorious Chandrakirti’s teachings,
whose globe of stainless wisdom moved
freely through the sky of your words,
dispelling the darkness that holds to extremes,
outshining the stars of false speakers—
it was then that my mind found peace.

His Holiness affirmed his confidence that cessation can be achieved and that to do so it is necessary to follow the true path. This includes the Three Trainings in morality, concentration and wisdom. A key factor in undermining ignorance is understanding that things do not exist in the way they appear. His Holiness commented that these days even quantum physicists make similar observations.

The ultimate profundity of Buddhism is rooted in the notions of dependent arising and designation in dependence on other factors. Jé Tsongkhapa reflected and meditated on these ideas for many years. He also engaged fervently in practices of purification and the accumulation of merit and wisdom.

While in retreat in Wölkha, one night he had a dream of Nagarjuna with five close disciples. One of them, described as having a bluish complexion, stepped forward and touched Jé Rinpoché’s head with a book. Next day, he consulted the treatise known as ‘Buddhapalita’ and gained insight into emptiness and dependent arising. As a consequence, he composed this text, ‘In Praise of Dependent Arising’, which expresses his strong conviction in the Buddha’s teachings.

“I received transmission of this work, ‘In Praise of Dependent Arising’, from my Junior Tutor Kyabjé Trijang Rinpoché,” His Holiness declared, “when he gave me a transmission of the whole of Jé Rinpoché’s ‘Collected Works’. It begins with an expression of homage to the Buddha for his teaching free of the eight extremes.”

His Holiness began to the read the text. The first verse praises the Buddha as ‘wisdom supreme, teacher supreme’. The second verse refers to the root of suffering as ignorance, which can be uprooted by coming to understand dependent arising. Although other Buddhist schools assert dependent arising, its subtlest expression occurs when things are described as existing merely by way of designation. 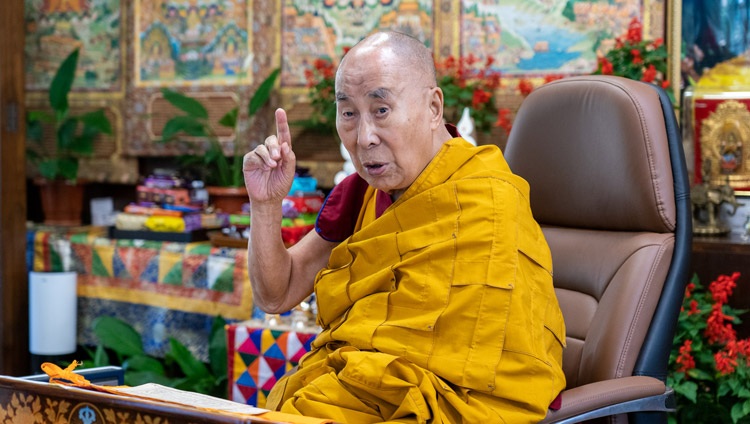 His Holiness the Dalai Lama speaking on the first day of his two day online teaching from his residence in Dharamsala, HP, India on October 9, 2021. Photo by Ven Tenzin Jamphel

As he continued to read through the verses His Holiness advised his listeners that we each have an instinctive sense of a self or ‘I’. However, if we really search for it, nothing can be found. He cited a verse from Nagarjuna’s ‘Precious Garland’:

A person is not earth, not water,
Not fire, not wind, not space,
Not consciousness, and not all of them.
What else is a person other than these? 1.80

His Holiness noted that things appear to have an objective, independent existence, but if they were to exist without being in dependence on other factors, it would be impossible to attain liberation. He pointed out that we refer to something as being empty when we say ‘form is empty’. However, that’s how it is. It’s not made empty by emptiness.

His Holiness ended his reading of the text today at the point that Jé Rinpoché writes: “All of this is devoid of essence,” And “From this arises that effect” — These two certainties complement each other with no contradiction at all. What is more amazing than this? What is more marvellous than this?

In answering questions from the audience His Holiness clarified that referring to things as merely designated is a subtle aspect of dependent arising. He noted that some karma or action is self-evident, some is concealed, while some subtle aspects of action are obscure. He stated that understanding emptiness can help us understand the function of causality.

He cited his own experience and declared that when he wakes in the morning, he is aware of having a sense of ‘I’. He searches for it and concludes that it only exists by way of dependent designation. It doesn’t exist in the way it appears. He confirmed that it is when you fail to find it that you come to realise that it only exists by way of designation.

Dependent arising is described as the king of reasonings because it is able to dispel the two extremes — permanence and nihilism — at the same time.

When we see something, the experience involves sensory perception, but judging that it does not exist in the way it appears involves mental consciousness. Reflecting on how things are empty of inherent existence diminishes our sense of their solidity. It’s important to appreciate that to say that something is empty doesn’t mean it doesn’t exist.

In answering a question about amassing the two accumulations of merit and wisdom in the practice of tantra His Holiness stressed the importance of being strongly convinced about emptiness. He pointed out that you meditate on emptiness first and then visualize arising from that in the form of the deity.

Responding to a question about combining practices associated with dependent arising and the awakening mind of bodhichitta, His Holiness led his audience through the ‘all-encompassing yoga mind’. This involves first cultivating bodhichitta, the aspiration to become a Buddha for all sentient beings, and imagining it transformed into a clear moon disk at the heart. He then described how to reflect on emptiness and imagine that understanding transformed into a white vajra standing on the moon at the heart.

This practice of ‘all-encompassing yoga mind’ involves a stabilized visualization of method and wisdom at the heart. His Holiness remarked that devotees who are able to conduct this practice on a daily basis can count themselves among the true disciples of the Dalai Lama. Just as he takes the Buddha, Nagarjuna and Jé Tsongkhapa as his role models, these disciples can take the Dalai Lama as theirs.

In terms of pleasing the Lama he explained that it is the Lama’s intention to reflect on the view of emptiness and to cultivate bodhichitta through the practice of equalizing and exchanging self and others. This involves maintaining the extensive lineage, the lineage of the profound view and the lineage of blessings that arise from the practice of deity yoga. This is a model for disciples to follow. His Holiness added that in addition to this it is important for disciples to remain cheerful and present a smiling rather than a stern or fierce face to the world.