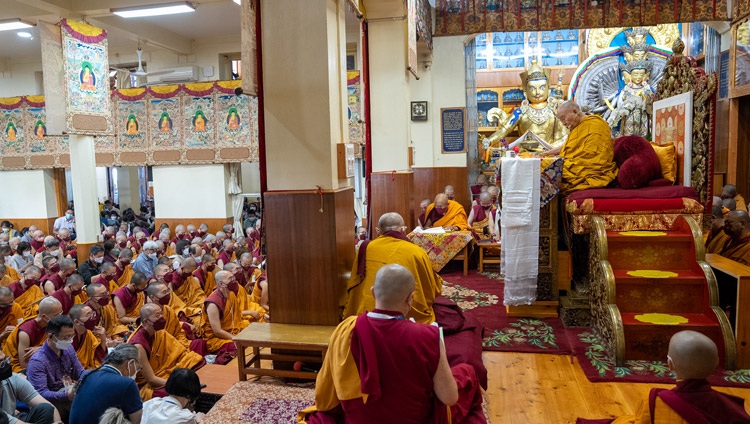 His Holiness the Dalai Lama addressing the congregation at the Main Tibetan Temple on the first day of teachings in Dharamsala, HP, India on October 3, 2022. Photo by Tenzin Choejor

Thekchen Chöling, Dharamsala, HP, India, 3 October 2022: As he walked through the yard to the Main Temple this morning, His Holiness the Dalai Lama smiled and waved to members of the estimated 5000 strong crowd from 55 countries waiting to greet him. He seemed, today, to pay particular attention to the elderly, stopping for a quick word, an affectionate pat on a head or hand, before moving on.

Once His Holiness was seated on the throne, the chant-master led a recitation of the ‘Heart Sutra’ in Chinese in which the 570 disciples from Taiwan joined in. Spotting a cat adrift in the congregation, His Holiness asked that it be returned to its owner in case it was distressed.

The ‘Heart Sutra’ was recited again in Tibetan.

“Today,” His Holiness announced, “our Chinese Dharma friends have asked me to teach Dharmakirti’s ‘Commentary on Valid Cognition’. [Translations of the text can be found in the Live section of this website]

“In his pledge to compose the text, Dharmakirti wrote,

“The majority of people having attachment to ordinary
pursuits and lacking in the requisite strength of
intellect, not only have no interest in
and fail to appreciate the holy discourses, but being
covered with the dirt of malice, even hate them.

I do not therefore entertain the thought that this work
(of mine) will be of benefit to others, but my mind having
developed an obsession, fostered by prolonged study of
science and scripture, I’m bent upon this task.”

“These days,” His Holiness continued, “people are absorbed in pursuing a materialistic way of life. While all religious traditions teach us to be kind, the Nalanda Tradition urges us to use our intelligence, to examine what disturbs our peace of mind. It is in this spirit that Dharmakirti reveals that after prolonged study of science and scripture, he is intent on composing this treatise, ‘Commentary on Valid Cognition’.

“Some scholars in the past in Tibet criticised this book as being of little interest to those who seek liberation because it does not deal with the stages and paths. Jé Tsongkhapa refers to this in his verse account of his own study and practice, ‘Destiny Fulfilled’. 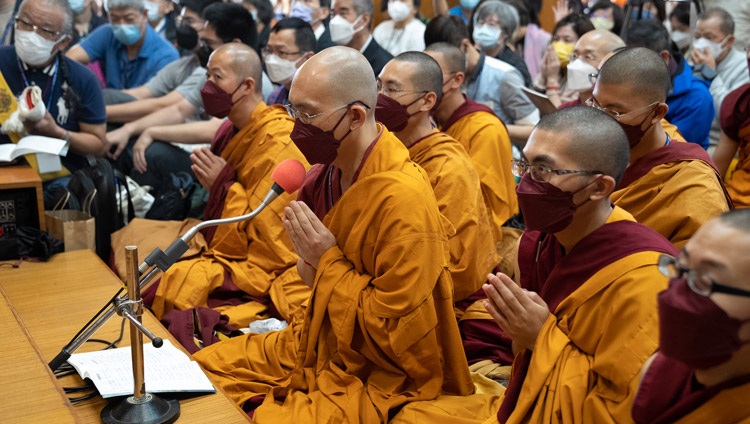 The chant-master leading a recitation of the ‘Heart Sutra’ in Chinese at the start of the first day of His Holiness the Dalai Lama’s teachings at the Main Tibetan Temple in Dharamsala, HP, India on October 3, 2022. Photo by Tenzin Choejor

In this northern land, many speak out in unison,
Whether they have studied the texts on logic and epistemology or not, saying,
“There is no graduated practice of the path leading to enlightenment
In the Compendium of Valid Cognition (Pramanasamucchaya)
And the corpus of seven treatises [such as Commentary on Valid Cognition (Pramanavarttika) by Dharmakirti.”

But they also take as authoritative the actual revelation
Granted by Manjushri to Dignaga, saying explicitly,
“Write this book. It will in future
Become the eye for all wandering beings.

Seeing these as absolutely absurd,
I especially scrutinised the system of logic.
The meaning of the Pramanasamucchaya’s salutation verse
Is established by the Pramanasiddhi chapter (of Dharmakirti’s Pramanavarttika)
Through the forward and reverse logical procedures,

Thereby proving the Bhagawan Buddha was an authoritative person
For those seeking liberation;
And then I found deep conviction
That only his Teaching is the haven
For those in pursuit of total freedom,

And I found a special joy
In clarifying all the keys to the paths extending to [the Lesser and Greater Vehicles
Which unfolded through the path of reasoning.

Thinking this over, how well my destiny was fulfilled
Thank you so much, O Noble Lord Wisdom Treasure.

“It is important to study the Commentary on Valid Cognition because it uses reason and logic to show that the Buddha is a reliable guide. Therefore, Jé Rinpoché studied it.”

His Holiness the Dalai Lama reading from chapter two of Dharmakirti’s ‘Commentary on Valid Cognition’ on the first day of teachings at the Main Tibetan Temple in Dharamsala, HP, India on October 3, 2022. Photo by Tenzin Choejor

His Holiness remarked that we live in a scientific era and that scientists are showing increasing interest in what the Buddha taught about the workings of the mind and emotions and how related insights help us achieve peace of mind. He pointed out that the principal factor contributing to such inner peace is training in altruism—love and compassion. He noted that when you have peace of mind, you sleep well without recourse to sleeping pills.

His Holiness mentioned his long-standing plan to hold discussions with educationists in Delhi to discover ways to introduce the cultivation of warm-heartedness into the general education curriculum. He is convinced it’s possible because karuna and ahimsa, compassion and doing no harm, have been upheld in India for thousands of years. It was on this basis that Mahatma Gandhi was able to promote non-violence as the underlying theme of India’s Freedom Struggle.

“As soon as I wake up in the morning,” His Holiness disclosed, “I cultivate bodhichitta, rooted as it is in love and compassion and it is from this that I find the courage to work for others.

“We say the Buddha is worth paying attention to, not because of miracles he performed, but because of what he taught. If we are to bring about peace in the world, we need to pay attention to how to achieve peace of mind within ourselves.”

His Holiness began to read Chapter Two of the Commentary on Valid Cognition, Establishing the Reliable Guide. He touched on the explanation of the degrees of subtlety of the mind recounted in Highest Yoga Tantra, divulging that two separate teams of scientists are examining these phenomena.

Having reached verse 152, His Holiness advised that the more we study the Buddha’s teaching, the better we’ll understand it. He conceded that if we want to know more about the use of logic and reason, the Commentary on Valid Cognition is the book to rely on. However, for an accurate philosophical view, we need to turn to Chandrakirti’s Entering into the Middle Way and its presentation of Prasangika Madhyamika thought.

“Having studied the teachings,” His Holiness observed, “if you are able to reflect on them and make yourself familiar with them, they will become part of your own experience.”

He cited verses 34-38 from Chapter Six of Entering into the Middle Way that expose the four logical absurdities that ensue if you assert that things exist independently. Although things do not have any independent, objective existence from their own side, this does not mean they do not exist at all. They exist by way of dependence and designation.

His Holiness suggested that if we make ourselves steadily more familiar with this understanding, we’ll be able to weaken our sense that things exist independently. And when we understand that we are all overwhelmed by grasping at the true existence of things, we’ll be moved by compassion for sentient beings extensive as space.

“That’s it for today,” he concluded, “We’ll resume tomorrow.” 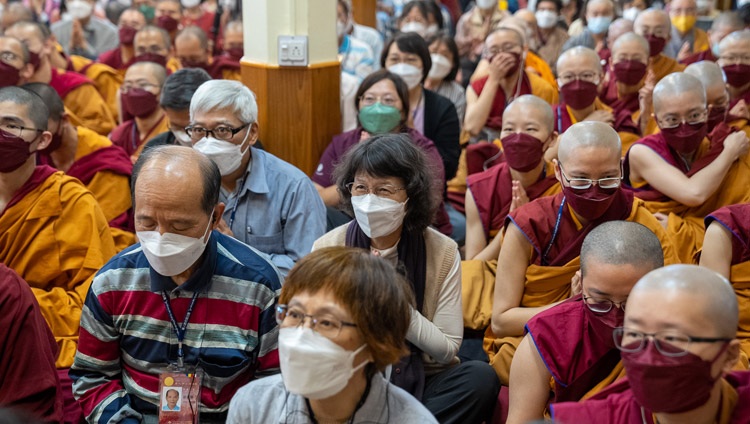 Some of the disciple from Taiwan listening to His Holiness the Dalai Lama speaking on the first day of teachings at the Main Tibetan Temple in Dharamsala, HP, India on October 3, 2022. Photo by Tenzin Choejor