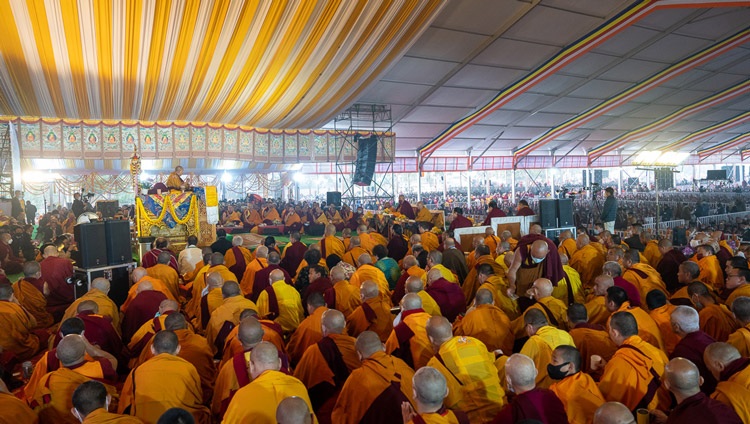 A view of the stage at the Kalachakra Teaching Ground during the Long Life Prayers offered to His Holiness the Dalai Lama by the Geluk Tradition in Bodhgaya, Bihar, India on January 1, 2023. Photo by Tenzin Choejor

Bodhgaya, Bihar, India, 1 January 2023: This morning, as part of the Geluk Great Prayer Festival, the Geluk International Foundation, the organization representing the entire Geluk Tradition, offered prayers for the long life of His Holiness the Dalai Lama.

A group of Abbots wearing their yellow crested hats and carrying white scarves and incense welcomed His Holiness as the golfcart in which he was riding entered the Kalachakra Ground. They escorted him to the stage and were joined on the last section by the Gaden Tri Rinpoché, Sharpa Chöjé and Jangtsé Chöjé. His Holiness waved to the crowd, saluted the eminent Lamas and took his seat on the throne. Gaden Tri Rinpoché, Sharpa Chöjé and Jangtsé Chöjé presiding over the ceremony sat facing His Holiness.

Today’s Long-Life Ceremony was based on the ‘Offering to the Spiritual Master’ (Lama Chöpa). It began with the more than 16,000 monks and nuns, many of them from the Himalayan Regions, briskly chanting the preparatory self-generation rite. Once that was done His Holiness addressed the gathering.

“It so happens that today, on the first day of the new year of the common calendar, we are gathered in this sacred place where monks from the three great seats of learning, Ganden, Sera and Drepung, are offering prayers. We are also joined by masters of the Sakya, Nyingma and other traditions. It is because the interdependence between us that we have gathered here on this occasion.

“As for me, I am determined to continue to serve the Buddhadharma, especially the Tibetan Buddhist Tradition, until I’m at least 100 years old. As you know, I am driven by the following prayer: 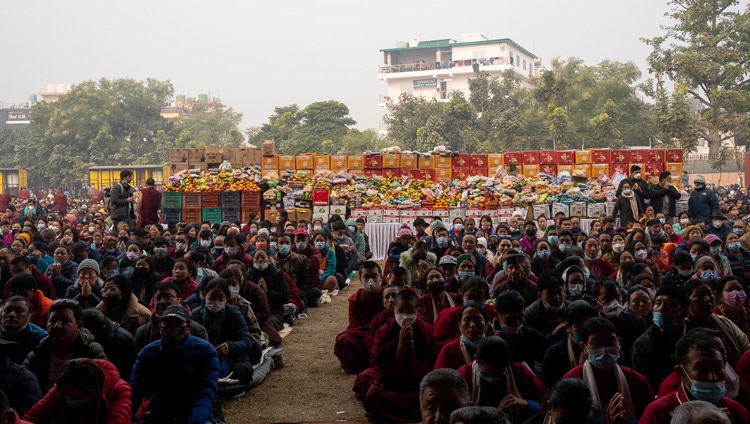 Offerings to be distributed to the crowd stacked high at the back of the Kalachakra Teaching ground during the Long Life Prayers offered to His Holiness the Dalai Lama by the Geluk Tradition in Bodhgaya, Bihar, India on January 1, 2023. Photo by Tenzin Choejor

For as long as space endures
And for as long as living beings remain,
Until then may I too abide
To dispel the suffering and misery of the world.

“People in Tibet are facing difficulties, but it is the people of the Three Provinces—Amdo, Kham and U-tsang—, the Himalayan Regions, as well as Mongolia, Kalmykia, Buryatia and Tuva, who most fervently pray for me to live long. These heartfelt wishes will bear fruit. I am determined to live for a long time and in my dreams I’ve had indications that I will live to be more than 100. The karmic connections between us serve as conditions for this to come about.

“We’ve gathered here, not to picnic and have a good time, but to lay the foundation for study, reflection and meditation in order to be able to practise the Three Higher Trainings year by year.”

His Holiness remarked that Buddhism that began as an Asian tradition now attracts interest from around the world. Scientists in the West, but also in China, are keen to explore what it has to say about the workings of the mind and emotions. China, he said, has traditionally been a Buddhist country, but under the communist system the authorities have sought to undermine it. However, of late, popular interest in Buddhism has been growing. He suggested there are signs that things may be changing that will lead to a better world.

“I’m well,” His Holiness declared. “My brain is sharp and alert. I’m still able to smile and will continue to do so for years to come.

“You too should feel happy and determined to continue your practice of the Dharma. We Tibetans and our neighbours have followed the Nalanda Tradition since Shantarakshita came to Tibet. Let’s pray that this tradition will flourish far into the future.

“I’ve done my best. People all over the world have become familiar with the name of the Dalai Lama. They know what I have to say about peace and compassion and I intend to continue to talk about these qualities for another 15 years or more. 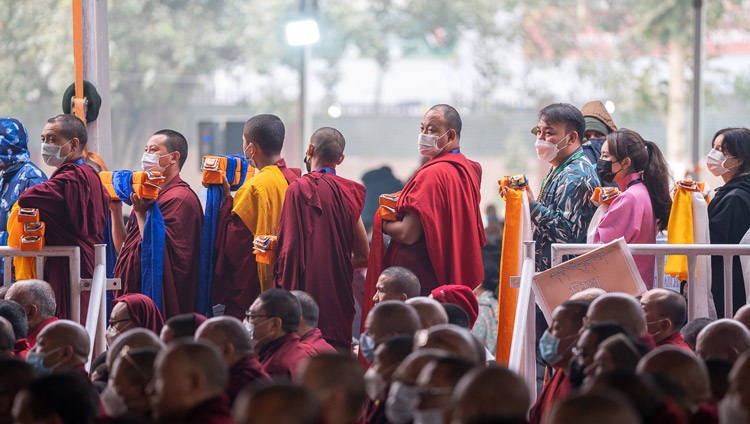 Lay and mnonastic members of the Geluk Tradition lined up waiting to parade in front of His Holiness the Dalai Lama holding their offerings during the Long Life Prayer at the Kalachakra Teaching Ground in Bodhgaya, Bihar, India on January 1, 2023. Photo by Tenzin Choejor

“I reflect on the awakening mind of bodhichitta and the meaning of emptiness whenever I can. And although Tibet, the Land of Snow, has undergone tremendous tragedy, one of the positive consequences has been that people have become aware of our culture and traditions. There is now a wider acknowledgement that Tibetan Buddhism is part of the treasure of humanity.

“That we have gathered here today at the start of a new year seems to be an indication that things are changing for the better. Please pray that all will be well. Tashi Delek.”

At the appropriate point in the ritual the Gaden Tri Rinpoché, Sharpa Chöjé and Jangtsé Chöjé came forward to offer a mandala representing the universe to His Holiness. While a group of Tibetan performers sang and danced down on the ground, and a Mongolian violinist played her fiddle at the corner of the stage, the Gaden Tri Rinpoché read a tribute reviewing His Holiness’s life and requested him to live long.

“When Tibetans had no one else to lead them,” Tri Rinpoché pronounced, “you took responsibility for Tibet when you were just 16 years old. Later, in exile you introduced a system of democracy.

“You studied extensively under great and accomplished masters. You have become the custodian of the complete teaching of the Buddha and in your turn have given a great many teachings. You have outshone other learned scholars.

“Before leaving Tibet you opened the ‘Perfection of Wisdom in 8000 Lines’ and read from it until you reached the point where it says, ‘Do not lose heart; keep up your courage.’ Then you left Tibet and reached India safely.

“Tibetan refugees suffered, some of them even having difficulties finding food. You took responsibility for setting up settlements for them. You re-established our monastic institutions. These now flourish and our traditions have become known around the world. People from foreign lands, Mongolians in particular, have been able to study with us in our monasteries as they did in Tibet. 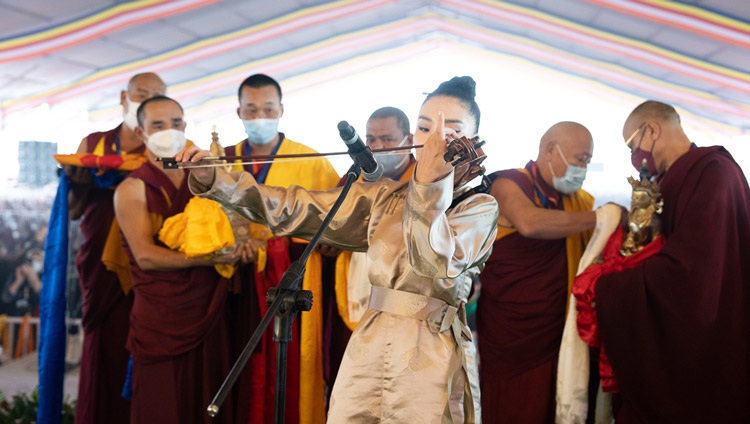 A Mongolian violinist performing as Gaden Tri Rinpoché reads a tribute to His Holiness the Dalai Lama during the Long Life Prayer at the Kalachakra Teaching Ground in Bodhgaya, Bihar, India on January 1, 2023. Photo by Tenzin Choejor

“The Central Tibetan Administration is based on a democratically elected system. You’ve set up a Cabinet, a Parliament and a Judiciary. Gradually you have transferred your responsibilities to this elected leadership.

“You have worked to attract support for our cause. Tibetans in Tibet face much hardship, but to resolve the difficulties they face you have proposed and adopted the Middle Way Approach. This has involved exchanges and discussions between Tibetans and Chinese through representatives. You have also drawn supporters such as the US Congress and so forth to our cause.

“Tibetans outside Tibet have been able to study and then go back to spread what they’ve learned in Tibet and China.

“You are committed to promoting human values in the cause of happiness, to encouraging inter-religious harmony, to working to preserve Tibetan culture and protecting Tibet’s natural ecology and to raising awareness of the benefits to be found in ancient Indian knowledge.

“In fulfilment of your wishes we have established an office for the Ganden Throne-holder. We have convened meetings to explore and discuss the writings of Maitreya and other classic texts. In addition, 50 Geshés and Geshé-mas have graduated this year. We have introduced opportunities for scholars to take up specialized studies and to engage in research and we have opened discussions to establish relations with other educational institutions.

“We have gathered here at Vajra-Asana where Your Holiness has taught the ‘Commentary on the Awakening Mind’ and given the permission of the Twenty-one Taras. Out of gratitude we have recited the Manjushrinamasangiti and Guhyasamaja Tantra 3000 times. We have read the ‘Essence of Eloquence’ 10,000 times. We have recited two million mantras of the deities of long life, twenty million Tara mantras, twenty million six-syllable mantras, ten million Vajra Guru mantras and so forth. Amongst lay people are those who have given up eating meat and drinking alcohol. The biography of Jé Tsongkhapa has been published and we are offering you images of Green Tara and the long-lived adept Thangtong Gyalpo. 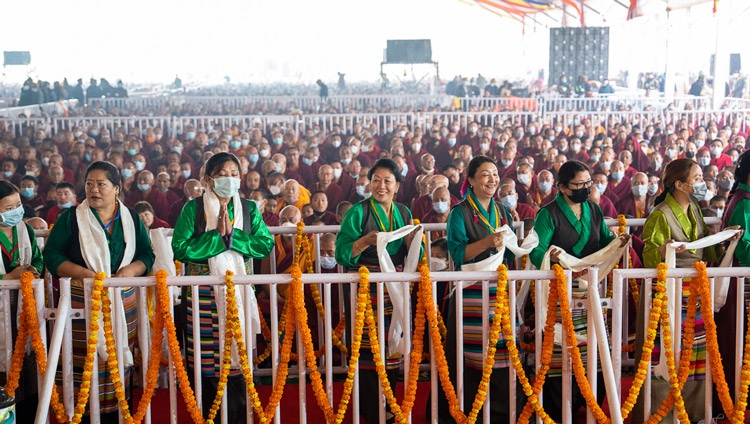 Tibetan performers singing and dancing as Gaden Tri Rinpoché reads a tribute to His Holiness the Dalai Lama during the Long Life Prayer at the Kalachakra Teaching Ground in Bodhgaya, Bihar, India on January 1, 2023. Photo by Tenzin Choejor

“The merit of all these positive deeds we have dedicated to your long life. May Tibetans continue to be guided and cared for by the series of incarnations of Avalokiteshvara. Your Holiness we make a fervent request that you live long.”

A statue of the Buddha, a scripture and a chörten were offered to His Holiness, followed by a monk’s staff, the seven royal emblems and the eight auspicious substances.

The Chief Minister of Arunachal Pradesh Pema Khandu and his brother Tashi Tsering, who is an MLA, made a presentation of a twig, leaf and seeds of what is now regarded as an auspicious tree as a souvenir to His Holiness. They reminded him that after entering Indian territory at Khen Dze Mani in the Tawang District of Arunachal Pradesh on 31st March 1959 he planted his walking stick on a rock at ‘Grong Kukpa’. That stick has since grown into a beautiful and revered tree and the twig, leaf and seeds came from it.

Secretary of the Geluk International Foundation, Geshé Lobsang Gyaltsen, former Abbot of Gomang Monastery, gave an account of income and expenses before offering thanks to everyone who had supported and participated in today’s Offering of Prayers for His Holiness’s Long Life.

His Holiness warmly acknowledged the senior Sakya and Geluk hierarchs before waving once more to the crowd. Then he boarded the golfcart to ride back to Gaden Phelgyeling. 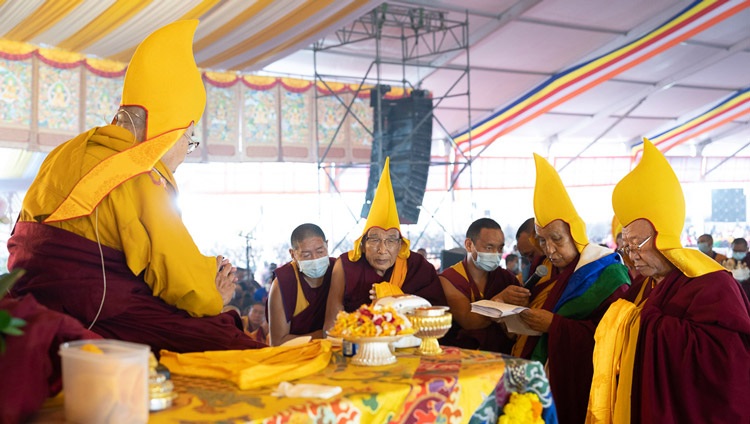 Gaden Tri Rinpoché reading a tribute reviewing His Holiness the Dalai Lama’s life and requested him to live long during the Long Life Prayer at the Kalachakra Teaching Ground in Bodhgaya, Bihar, India on January 1, 2023. Photo by Tenzin Choejor 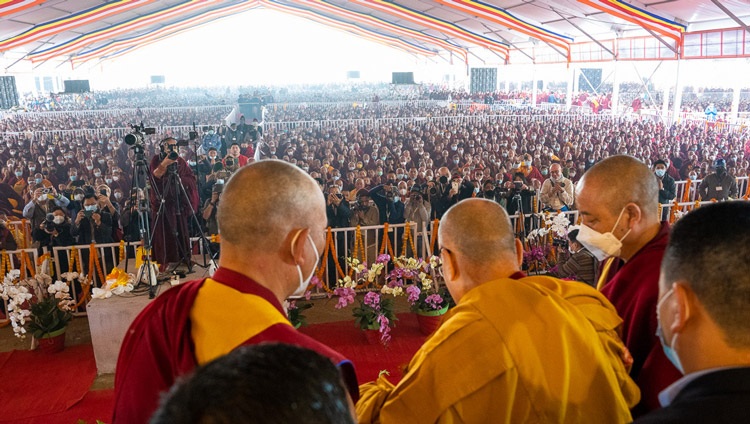 His Holiness the Dalai Lama waving to the crowd at the end of the Long Life Prayers at the Kalachakra Teaching Ground in Bodhgaya, Bihar, India on January 1, 2023. Photo by Tenzin Choejor