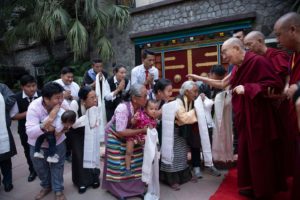 His Holiness the Dalai Lama being welcomed by Tibetans in Delhi. Photo/Tenzin Jigme/CTA

His Holiness explained about his recent mild infection and explained that on the 9th of April after he reached Dharamsala he wasn’t feeling good so he decided to come down to Delhi for a medical check-up. A small infection in lungs and liver was depicted after which he was advised to rest at the hospital for some days.  After being discharged from the Hospital, His Holiness rested at a hotel. Later His Holiness visited the hospital again for a check-up, where the doctor declared him very fine to make a journey back to Dharamsala.

His Holiness decided to meet some old friends and Tibetan youths in and around Delhi before heading back to Dharamsala.

Addressing the gathering, His Holiness shared his experience with scientists and scholars that he met around the world. He also shared the discussion on important experience which modern scientists cannot explain whereas our culture and history can.

“There is a significant advancement in materialistic infrastructure but no psychological development or inner value development” alerted His Holiness the Dalai Lama. The ancient tradition of India passed down onto Tibetans in the form of the Tibetan Buddhist tradition and particularly the Buddhist philosophy and its relevance to tackling modern human crises was highlighted by His Holiness this morning.

His Holiness said, “Lord Buddha has come into the world not to create geographical maps but to teach the four noble truths and how to create peace from within and not just from outside. So we Tibetans have sustained the teachings of Nalanda scholars which is very much needed at this point of time. And the Tibetan language is the most suitable language to study these.”

He further talked about the significance of Tibetan Language beginning from 33rd King of Tibet Songtsen Gampo’s era. How the  Tibetan Buddhist texts (kagyur and tengyur) has been translated into the Tibetan language. He imparted how Logic and philosophical views can be best explained and understood in the Tibetan language.

Further engaging in the importance of Tibetan Language, His Holiness firmly urged the youth to study Tibetan language in order to preserve the rich religious and cultural heritage of Tibet. And with that, he emphasised the importance of emotional hygiene. His Holiness talked about the recent event of the launch of Social Emotion and Ethical (SEE) Learning curriculum which focuses on inner hygiene as opposed to materialistic education. Over 33 countries representative have participated in the event.

His Holiness asserted that the Tibetans could be the only people In this world who can widely explain Buddhist psychology and therefore once again urged and advised the youth to study and preserve it.

“You can’t go to a store and buy happiness because that would make you look like a mad person. We can only train our mind by learning about the mind first. We should know what is destroying the peace of mind and its root cause first.  We will then come to know it is anger that destroys the peace of mind and we now have to know the opposite of anger and that is always kindness and compassion” explained His Holiness the Dalai Lama.

His Holiness claimed that for 7 billion people around the world to attain peace, focus on inner hygiene is a must. He noted that the youth of 21st have the great opportunity of combining study on inner values with the modern education and create a huge legacy. He shared his childhood experience of learning Buddhist Psychology and the benefits of it.

He bid farewell to the students on the note to “stay happy and to study Buddhist Psychology”. 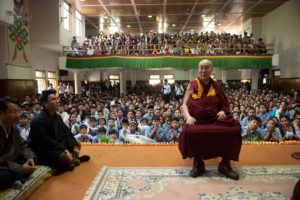 His Holiness the Dalai Lama and the Tibetan youths of Delhi at Tibetan Youth Hostel. Photo/Tenzin Jigme/CTA 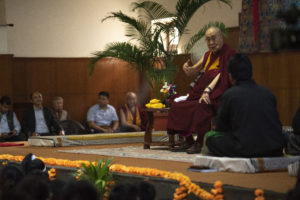 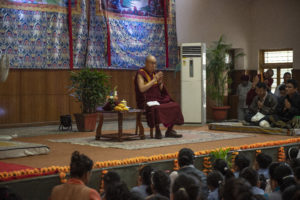 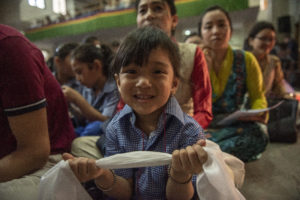 A small girl welcoming and greeting His Holiness the Dalai Lama at the auditorium in Tibetan Youth Hostel, Delhi. Photo/Tenzin Jigme/CTA 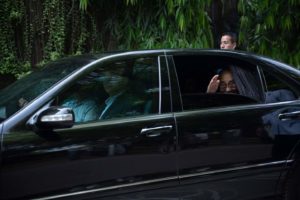 His Holiness leaves from Tibetan Youth Hostel Delhi and bids farewell to the public. Photo/Tenzin Jigme/CTA