His Holiness the Dalai Lama watching monks debating Buddhist philosophy as part of the Great Summer Debate as he arrives for his teaching in Lingshed, Leh District, UT, Ladakh on August 10, 2022. Photo by Tenzin Choejor

Lingshed, Leh District, Ladakh – 10 August 2022: This morning His Holiness the Dalai Lama flew by helicopter from Leh to Lingshed Village and drove straight to the ground beside the Monastery where an estimated 3000 people had gathered—Ladakhis and people from abroad. Dr Tashi Gyalson, Chief Executive Councillor and Chairman of the Ladakh Autonomous Hill Development Council offered His Holiness a mandala, and the organisers of the ten-day, Great Summer Debate (Yarchos Chenmos), offered silk scarves. His Holiness then gave a brief teaching on the ‘Eight Verses for Training the Mind’ by Kadampa Geshé Langri Thangpa.

“I’m pleased to see members of the monastic community here,” he remarked, “who are interested not only in performing rituals, but have also engaged in the study of Buddhist philosophy. I’d like to thank everyone who has contributed to this positive development. I see too that the school-children here are taking part in debates with each other. I’ve no doubt that cultivating such skills helps us sharpen our minds.

“Soon after we arrived in India as refugees in 1959, I requested the support of the then Prime Minister of India, Pandit Jawaharlal Nehru, to establish separate schools for Tibetan refugee children. His generous response enabled us to preserve our culture, language and identity, for which we remain grateful. To begin with, these schools employed religious teachers, but later we felt it would be more relevant if they were to teach Buddhist philosophy.”

His Holiness began to read the ‘Eight Verses’, making brief comments on the way. He made clear that the essence of the teaching is not to focus on the next life or the attainment of Nirvana, but to tame the mind and cultivate a warm-heart here and now. 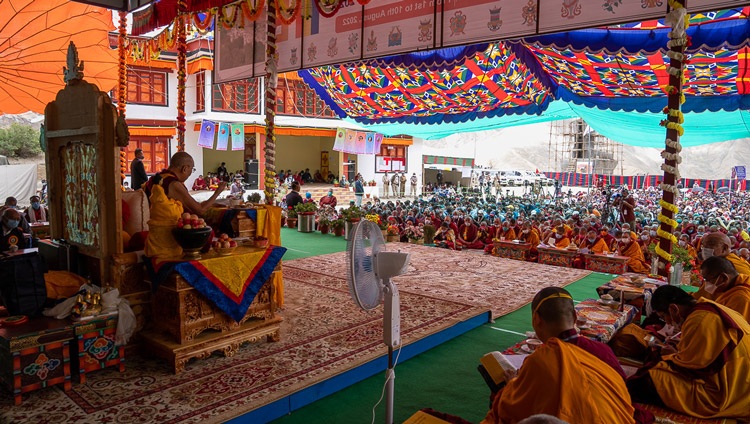 His Holiness the Dalai Lama teaching on ‘Eight Verses for Training the Mind’ to the gathering at the ground beside Lingshed Monastery in Lingshed, Leh District, UT, Ladakh on August 10, 2022. Photo by Tenzin Choejor

His Holiness declared that the spirit of the Tibetan people is resolute and unwavering, and pointed out that they have long shared a common Buddhist culture with people of the Himalayan region.

Today marked the end of the Great Summer Debate, an annual ten-day event held by the monastic institutions of Ladakh. The purpose has been for scholars of Buddhist and other religious traditions to exchange ideas and deepen their understanding of them. Students from various local high schools attended a seven-day introductory course in Buddhism, following which they conducted elementary debates on what they had learned.

Participants in the Great Summer Debate also discussed such topical issues as climate change and global warming and the crucial importance of maintaining social harmony.

Founded in 1440, Lingshed Gonpa has long served the community living in Lingshed and seven nearby villages, which consists of about 1000 people. There are currently about 60 monks in the monastery here, while others have joined Centres of Learning in monasteries such as Drepung re-established in South India, as well as Gyutö Tantric Monastery in Dharamsala.

The Ladakh branch of the Men-Tsee-Khang (the Tibetan Medical & Astro Institute) held free medical camps providing doctor’s consultations at Lingshed, just as they did recently during His Holiness’s three-day teaching in Leh.

Tomorrow, His Holiness will embark on a three-day visit to Zanskar. 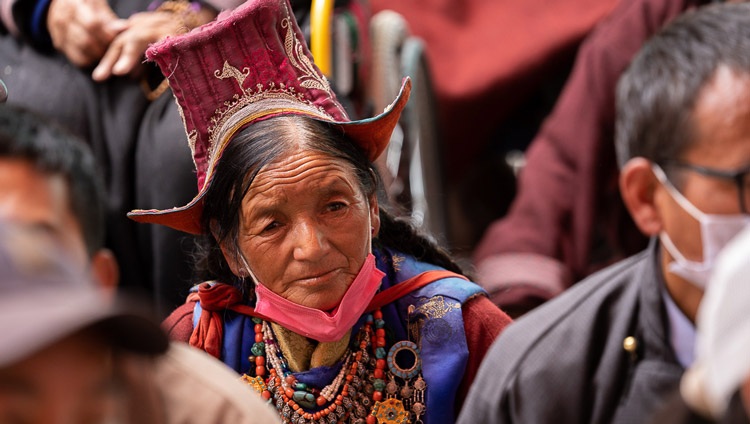 A member of the audience estimated at 3000 listening to His Holiness the Dalai Lama during his teaching in Lingshed, Leh District, UT, Ladakh on August 10, 2022. Photo by Tenzin Choejor