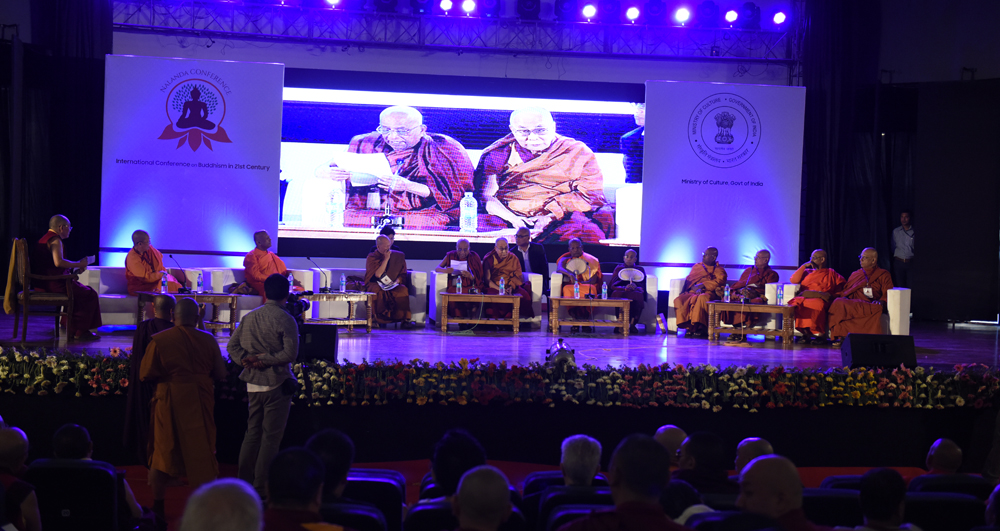 His Holiness the Dalai Lama with Sangharajas and Mahanayakas of various Buddhist traditions and countries at Rajgir International Convention Center, 18 March 2018.

RAJGIR, Bihar: His Holiness the Dalai Lama paid a short visit to the Nav Nalanda Mahavira University this morning from Rajgir.

Upon arrival at the University, His Holiness planted a sapling of Bodhi tree and unveiled the plaque of the University’s new Department of Buddhist Science. The department was declared open at the inaugural session of the International Buddhist conference by His Holiness the Dalai Lama yesterday.

Following the unveiling, His Holiness the Dalai Lama interacted with the students and faculty of the University, urging them to vigorously pursue the rich ancient knowledge of India.

“No matter how small the university is at the moment, you carry the name of Nalanda. Therefore, you have an immense responsibility to revive the heritage of this historic university,” His Holiness said.

“In the years to come, this university would regain its lost historic significance and become the primary seat of Buddhist learning and knowledge worldwide. In this regard, my prayers and assurances are always with you,” His Holiness added.

His Holiness also spoke about the massive destruction of Tibetan religion and culture caused by the Cultural Revolution of the Chinese government and his efforts to revive it in exile.

“Before the Cultural Revolution imposed by the Chinese government in Tibet, there were several thousand monasteries. However, almost 6000 of these monasteries were destroyed. After I came to India as refugee in 1959, I urged the monks to devote their time in studying the Buddhist texts and reestablish the great monasteries of Tibet in exile,” His Holiness recalled.

His Holiness further emphasised critical analysis of the Buddhist texts and focusing on the ultimate reality of the teachings rather than just reading it for the sake of spirituality.

His Holiness also discussed the philosophical contributions of the ancient Nalanda scholars such as Chandrakirti, Nagarjuna, Budhapalita, Bhavaviveka, etc and concepts such as duality, madhyamaka, sunyata, and the link between ancient Buddhist knowledge and modern quantum physics.

Following the interaction, His Holiness returned to the Rajgir International Convention Center for a brief discussion with Buddhist scholars and spiritual leaders (sangh rajas and mahanayakas) from various countries.

At the discussion, His Holiness emphasised the need for various Buddhist traditions to come together and contribute towards social emancipation. He particularly lauded the Christian community’s focus on building schools and hospitals which have a direct benefit to people.

His Holiness also expressed his concern at environmental destruction and suggested that Buddhist leaders could work together to conserve nature and safeguard the ecological health of the earth, which he described as our only home.

His Holiness further remarked that global challenges should be addressed at a systemic level and Buddha has shown the path on how to do it by proper analysis and examination. The discussion was followed by a brief question and answer session with the audience.

After lunch, His Holiness the Dalai Lama left Rajgir for Gaya city from where he will depart for Bhopal. Tomorrow, His Holiness will address legislators and bureaucratic staff of Madhya Pradesh at Bhopal on “how to live a happy life”. 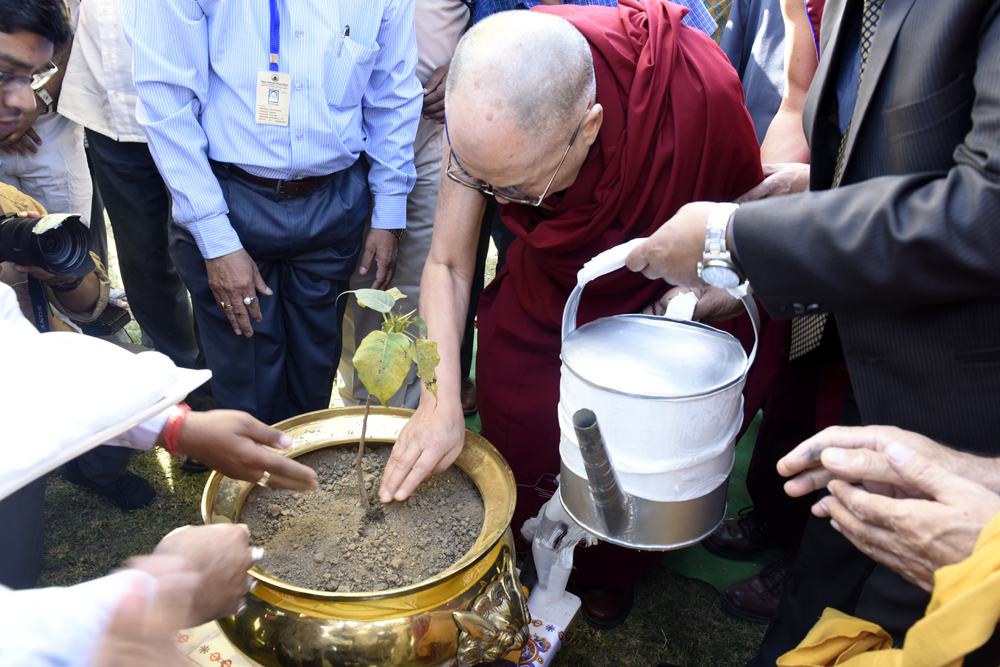 His Holiness the Dalai Lama planting a sapling of the Bodhi Tree at Nav Nalanda Mahavihara at Nalanda, Bihar on 18 March 2017. 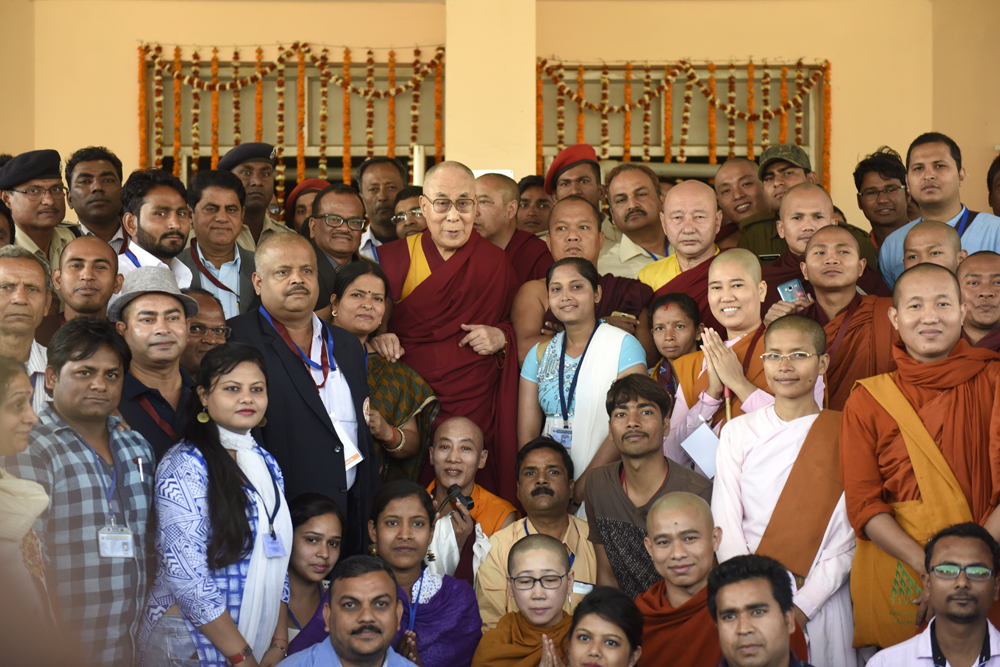 A group photo of His Holiness the Dalai Lama with staff and students of Nav Nalanda Mahavihara, 18 March 2017. 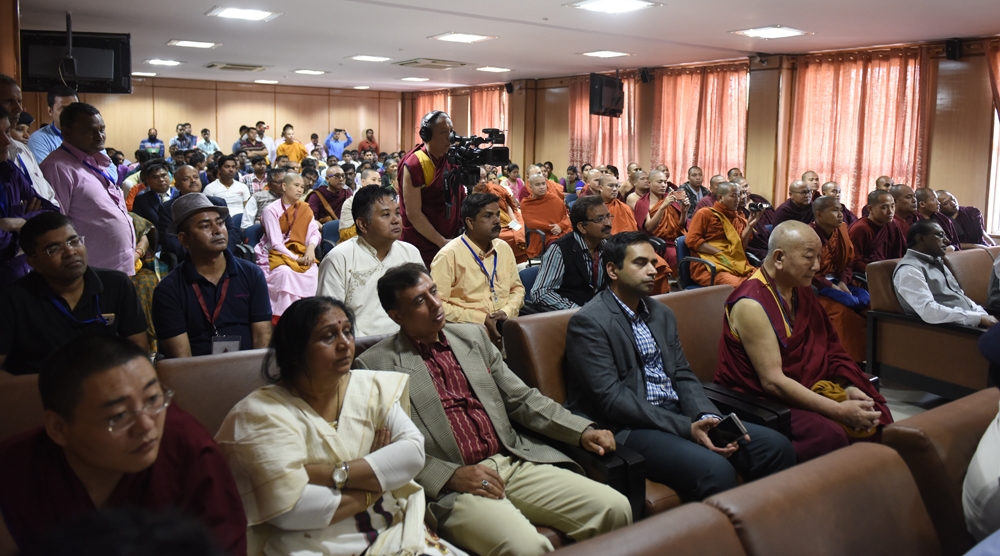 Students and faculty of Nav Nalanda Mahavihara at Nalanda, Bihar on 18 March 2017. 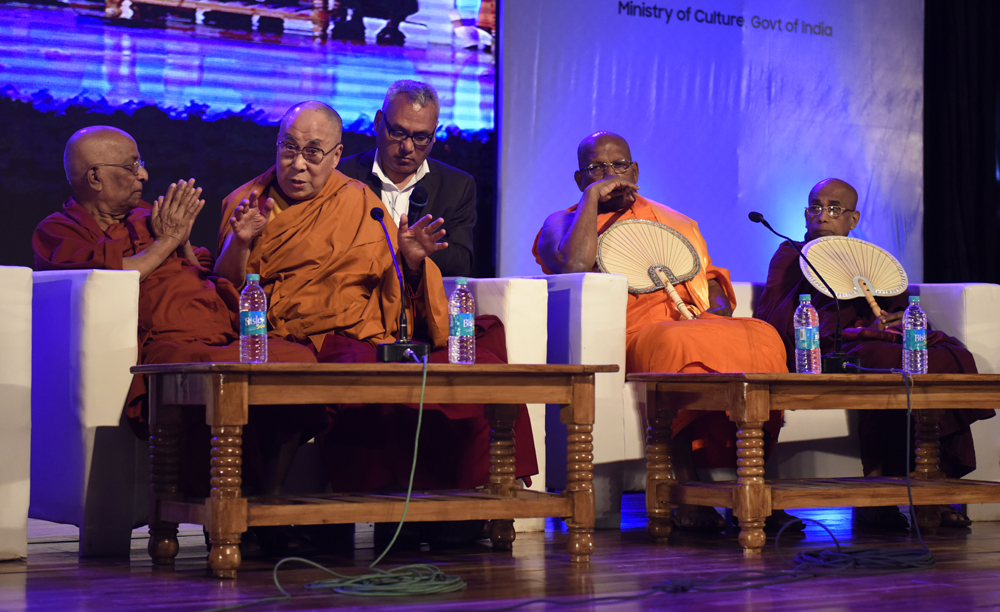 His Holiness the Dalai Lama speaking at the brief discussion with Sangh rajas and mahanayakas of various Buddhist traditions at Rajgir, 18 March 2017. 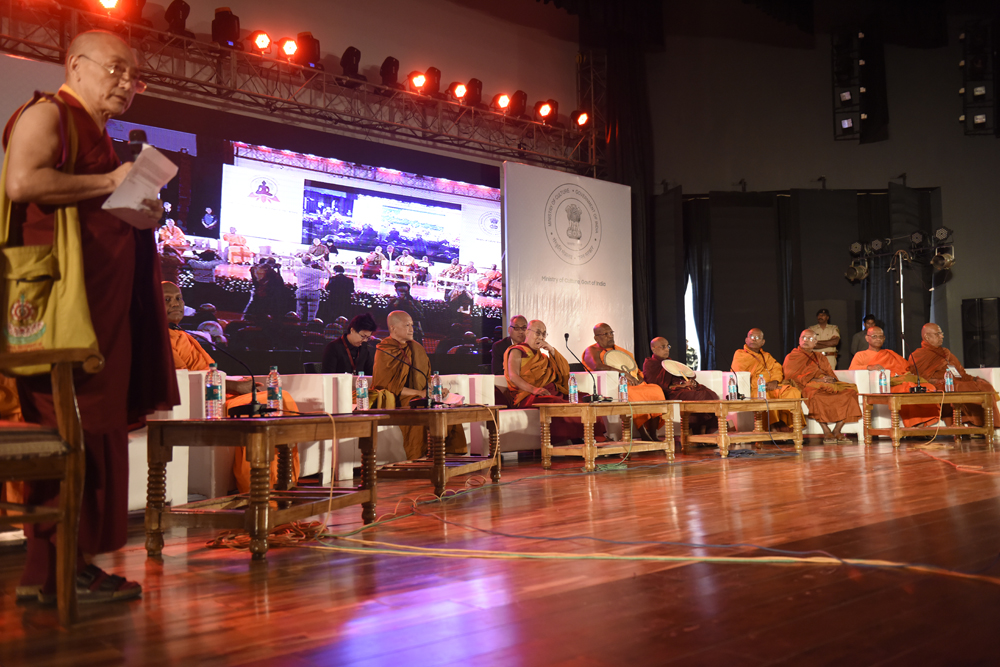 His Holiness the Dalai Lama with Buddhist leaders of various countries at Rajgir, 18 March 2017.