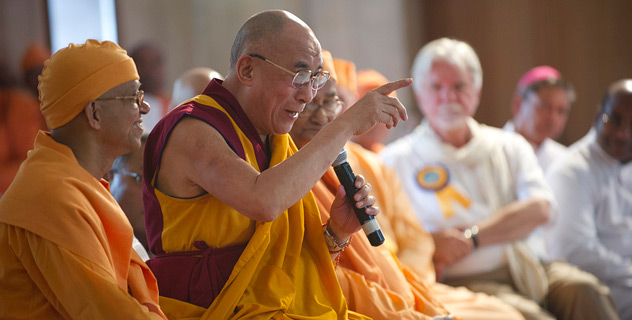 His Holiness the Dalai Lama at the ‘World Meet for Peace and Harmony’ at the Ramakrishna Mission in New Delhi on 11 Sept, 2012. (Photo/OHHDL/Choejor)

NEW DELHI: Although, following the tragic events of September 11th 2001, this day is remembered by many with sorrow, it also commemorates an occasion of bright significance. It was on 11th September 1893 that Swami Vivekananda fired the imagination of his listeners with his speech to the first Parliament of Religions held in Chicago. It was perhaps the first occasion that anyone had acknowledged the existence of other faith traditions with respect and had suggested that they were paths to the same goal and so could live in harmony with one another. The Ramakrishna Mission, a philanthropic, volunteer organization that conducts extensive welfare and educational work, founded by Swami Vivekananda four years later in 1897, celebrated the event today with an All Faiths Prayer Meet at their temple in New Delhi.

His Holiness the Dalai Lama was welcomed as a guest while representatives of the Vedic tradition, Nichiren Buddhism, Jainism, Christianity, Islam, Judaism, Bahá’í, Zoroastrianism, Sikhism and Hinduism sang or recited prayers from their respective traditions. His Holiness was invited to speak at the end. He greeted his spiritual brothers and sisters and began by comparing the numbers of followers of the various traditions in the world. It was agreed that probably Christianity has the largest number of devotees, followed by Islam and Hinduism, but His Holiness noted that while Zoroastrians may now be one of the smallest religious communities in the world they exercise their freedom to worship in India without fear. 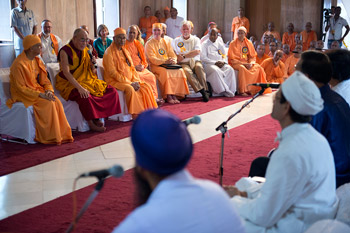 His Holiness the Dalai Lama speaking at the All Faiths Prayer Meeting at the Universal Temple of Sri Ramakrishna in New Delhi. (Photo/OHHDL/Choejor)

He said, “I am grateful for all our religious traditions, because, despite their differing philosophical views, they all convey the same message of love and compassion and counsel us to live a simple life. In a world of 7 billion human beings with different ways of life these different traditions are necessary for humanity. Realistically speaking we need these different approaches to achieve inner peace and peace in the community.”

He went on to say that while prayer is good on a personal level, he has come to the conclusion that it is not always effective in the wider world. Violence and war persist in many places and prayer seems insufficient to stop it. What we need to do is to take action. He also advised that if religious teaching remains in a book that we only read occasionally, while we lead our lives in another direction, there is something wrong and it does not serve much purpose. At the same time he was all praise for India for its long-standing tradition of religious harmony. Occasional outbreaks of religious friction may take place, but these are understandable and of minor significance compared to the example of harmony and respect that otherwise prevails.

Next, His Holiness participated in the inauguration of a well-presented exhibition focussing on the life of Swami Vivekananda, which included viewing a short 3D film on his life. As part of the Ramakrishna Mission’s celebrations of the impending 150th anniversary of Swami Vivekananda’s birth it is holding a World Meet for Peace and Harmony. For today’s inaugural session the Chief Guest was former President of India, Dr APJ Abdul Kalam. The Guest of Honour, Srimat Swami Smaranananda Maharaj was unable to attend for health reasons and was represented by Swami Vagishananda, who said although we have a dream of peace and harmony, division persists. He quoted Swami Vivekananda saying, “If you want peace of mind, don’t find fault with others.”

Dr AJP Abdul Kalam pointed out that overcoming poverty in the world is a precondition for peace and harmony. He quoted Tagore as saying, “If you want to know India, study Vivekananda, in him all is positive, nothing negative.” He suggested that when there is righteousness in the heart, there is beauty in the character and when these two exist there is harmony in the home and order in the country. The question he asked is how to ensure that young minds cultivate righteousness in the heart and told his listeners that, in his experience the answer lay in the power of great teachers.

Requested to offer some words of benediction, His Holiness first expressed his admiration for his friend Dr AJP Abdul Kalam, “He comes from a Muslim family, trained as scientist and became president of the most populous democratic country in the world; in fact the country where the most sophisticated philosophical views have developed.”

He went on, “As I mentioned earlier, all the world’s religions are found in this country, both homegrown religions like Hinduism, Buddhism, Sikhism and Jainism and others from outside like Christianity, Islam, Judaism, Zoroastrianism and Bahá’í. They all flourish and live together in harmony, so in India this harmony is not just an idea or an aspiration, but a reality.

“Swami Vivekananda is no longer with us, but the spirit of what he achieved is alive and growing. He had great foresight and I feel I am a follower, trying to implement his dream of creating inter-religious harmony in the world. However, while respecting Swami-ji’s vision, I would like to say something about the Parliament of World Religions, which I have attended in Cape Town and Melbourne. I think there is a risk of these meetings just becoming occasions for religious leaders to exchange calling cards. I feel we need to make more effort if we are to actively foster harmony among our traditions. In Melbourne I said that effects come from actions not mere talk.

“As a Buddhist monk I pray and it is of some help for my own peace of mind, but as for world peace, it has little effect. A couple of years ago in Patna I was invited to attend the inauguration of a Buddhist park, during which the Chief Minister asked that by the Buddha’s blessings his state might prosper. When my turn came to speak I said that if the state’s prosperity depended on the Buddha’s blessings it should have happened long ago and that what was really needed was for a capable Chief Minister to take action. Action is the meaning of karma, while prayer is a little like wishful thinking. For example, climate change is a reality that I think probably cannot be affected by prayer.”

His Holiness commended the Ramakrishna Mission’s emphasis on education. He said education is the way to achieve far-reaching results, it is the proper way to promote compassion and tolerance in society. Compassion and peace of mind bring a sense of confidence that reduce stress and anxiety, whereas anger and hatred come from frustration and undermine our sense of trust. He described many of our problems as our own creation, why? because of ignorance. Education, however, is the instrument that increases our ability to employ our own intelligence. While praising the Ramakrishna Mission’s educational work, he urged its members to consider how to introduce moral ethics into the modern curriculum. He said he thought it was possible to talk about warm-heartedness without needing to talk about God or Buddha, for example.

Finally, he mentioned the increasing gap between rich and poor and the problem of corruption, saying, “When so many people are still poor, how can you let corruption go on. In this country, people are very religious minded, many offer puja to the gods every day and yet in their daily lives it seems to make little difference when it comes to issues like corruption. If you believe in god and karma, how can you not care when this kind of behaviour goes on. If I have been too frank today, or have offended anyone with what I’ve said, I apologise. Thank you.”