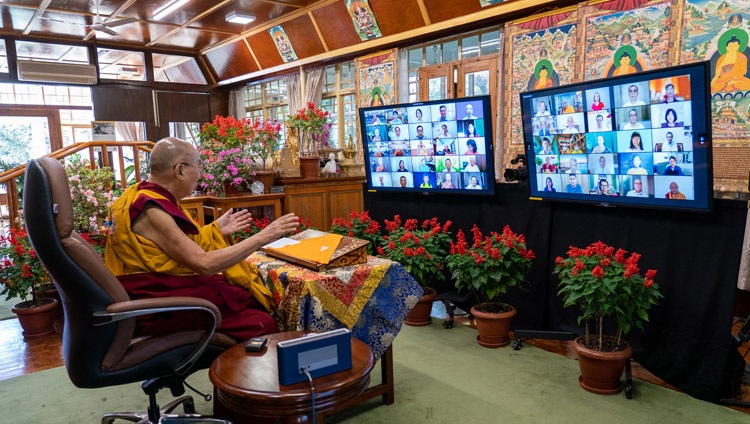 His Holiness the Dalai Lama addressing the virtual audience on the second day of his two day online teaching from his residence in Dharamsala, HP, India on October 10, 2021. Photo by Ven Tenzin Jamphel

“Today, Dharma friends, we’ll go over the remaining transmission of ‘In Praise of Dependent Arising’” His Holiness announced as soon as the chanting of the ‘Heart Sutra’ was complete.

“As the Buddha said in the Questions of Rashtrapala Scripture:

“The way is empty, peaceful, and uncreated.
Not knowing that, the living beings wander.
Moved by compassion, he introduces them
With hundreds of reasons and technical procedures.

“He then used different means to lead beings out of cyclic existence. If he’d taught emptiness from the start, some people would have feared he was recommending nihilism. Instead, he taught the Four Noble Truths, their nature, function and result, and revealed emptiness in the second turning of the wheel of Dharma. Consequently, all followers of the Sanskrit Tradition of Buddhism recite the 25 verse Perfection of Wisdom Sutra that is better known as the ‘Heart Sutra’.

“It includes the lines: ‘Form is empty; emptiness is form. Emptiness is not other than form; form also is not other than emptiness’, which summarize the Perfection of Wisdom. Nothing from form up to the omniscient mind can be found when sought, and yet things still exist. However they do not exist as they appear — form is empty. If we seek for the identity of things, it’s not to be found.

“Form and so forth don’t exist from their own side. But when the causes and conditions come together, we can understand that form exists as a dependent designation. As Chandrakirti says, things arise from emptiness in a robust way.

“I meditate daily on emptiness and have done for many years,” His Holiness revealed. “I have a sense that I could be approaching the path of seeing and am hoping to reach it. Perhaps at the moment I’m near to the path of preparation. The Buddha’s teaching is founded on reason and it can really help us counter negativities within us.

“There is a verse that you Chinese recite at the end of the ‘Heart Sutra’.

“Ultimately, the reason for dispelling the three poisons, attachment, anger and ignorance, and for cultivating wisdom and overcoming obstacles, is to engage in the deeds of Bodhisattvas. And we do this in order to help all beings attain enlightenment. To increase our insight, we need to study.”

His Holiness resumed his reading of the text from verse 22. He commented that great Indian masters have advocated doing no harm for more than 2500 years and yet many of them continue to cling to the idea of a single, separate, autonomous self. On the other hand, the Buddha taught that although things appear to be inherently existent, they are actually dependently arisen. 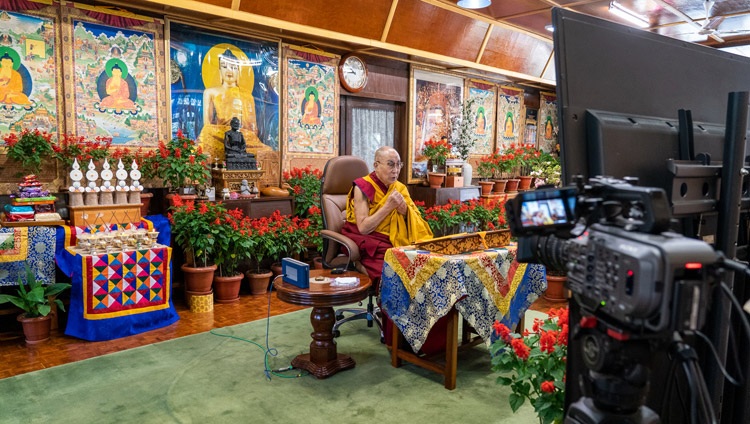 His Holiness the Dalai Lama speaking on the second day of his teachings on ‘In Praise of Dependent Arising’ online from his residence in Dharamsala, HP, India on October 10, 2021. Photo by Ven Tenzin Jamphel

His Holiness recalled that Jé Tsongkhapa examined the Buddha’s teachings for many years. He observed that if you read his early writing, such as the ‘Golden Rosary’ and compare it to later works like ‘Illuminating the Intent’, you can see how his understanding of the view evolved.

Manjushri advised Jé Rinpoché to go into retreat to engage in practices of purification and accumulation. He replied that he felt that he ought to fulfil his responsibilities to the many students he was teaching. Manjushri retorted that he knew full well what would be of benefit to him and to the Dharma.

At Wölkha he performed purificatory practices in association with the 35 Buddhas of Confession. During a dream about Nagarjuna and his disciples, he saw one with a dark complexion come forward and touch a book to his head. The following day he read the treatise named ‘Buddhapalita’ after its author. As he was reading and meditating on the eighteenth chapter, ‘Analysis of Self and Phenomena’, all of a sudden everything became clear. All his doubts, especially about what is negated in emptiness and what is left untouched, vanished without a trace.

Once His Holiness had completed his reading of the text, he recalled that, while still in Lhasa, one day he propitiated the protectors. That night he had a dream in which he was reciting the final verse of the Lam Rim Dedication Prayer:

When I strive to properly achieve the supreme vehicle
Through the ten deeds of the teaching,
May I be accompanied always by those who have power,
And may an ocean of good fortune pervade all directions.

He has since reflected that this may relate to his having been able to contribute to the well-being of the world through sharing the Buddha’s teachings.

Responding to questions from the audience, His Holiness noted that with regard to the disparity between appearance and reality, today, even quantum physicists highlight such a disparity in connection with external objects. Although things appear to have some objective existence, and appear to exist from their own side, this impression is merely our mental projection. In relation to our own minds, when things appear to us, we feel that what we see is the best thing to do. But the reality is different. As Shantideva observes:

Why say more? Observe this distinction: between the fool who longs for his own advantage and the sage who acts for the advantage of others. 8/130 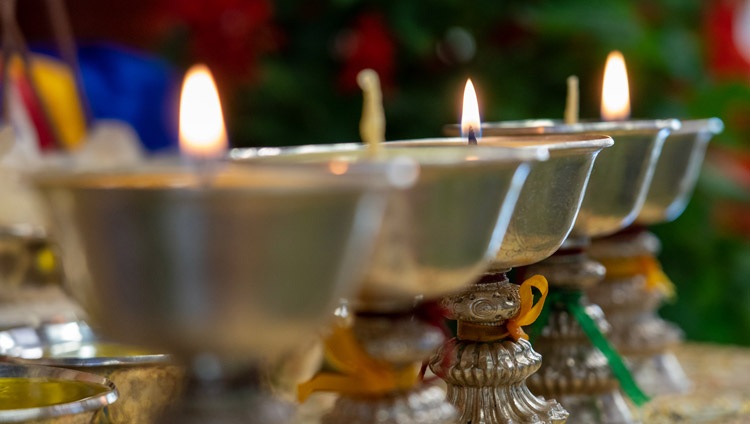 Butter lamps arranged as offerings behind His Holiness the Dalai Lama during the second day of his two day online teaching from his residence in Dharamsala, HP, India on October 10, 2021. Photo by Ven Tenzin Jamphel

His Holiness conceded that it is good if a teacher and disciples are able to meet together in person, which recent events have made more difficult. However, he pointed out that none of us has met the Buddha or Nagarjuna and yet their teachings have been effectively passed down to us and we are able to study them.

Invited to advise on how to manage disputes, His Holiness remarked that these days disagreements about philosophical views are rare. Disputes are much more likely to be related to day-to-day issues about livelihood and so on. He noted that while different religious traditions adopt different philosophical positions, they share a common message about the value of being compassionate and helping others.

He remarked that it is more usual to consider our close relatives in terms of their kindness to us then in terms of whatever suffering they may experience. He emphasised that the essence of the bodhisattva vows is to avoid harming others and to help them whenever and wherever possible.

He reminded his listeners that if they are to eliminate the three poisons referred to in the verse he had mentioned earlier, they need to develop the light of wisdom. He reiterated that when he wakes in the morning, he first generates bodhichitta and refreshes his bodhisattva vows. Then he recites ‘In Praise of Dependent Arising’ and related verses by Nagarjuna before reflecting on the nature of the person.

He counselled that if you don’t understand right away something a Lama has explained, you can listen to it and reflect on it again and again. It may be, however, that what has been taught is inconsistent with what is explained in the great treatises. The key is not to accept what anyone says unquestioningly. You have to examine it and apply reason.

As the session came to an end, His Holiness announced that he would review the ‘all-encompassing yoga mind’ he taught yesterday. He suggested that followers of the Buddha should not harm others and should be patient when others harm them. They should make an effort to cultivate bodhichitta, aspiring to become a Buddha for the sake of all sentient beings. This bodhichitta focussed on enlightenment transforms into a white moon disc at the heart.

Next, he encouraged examining who is the ‘I’ that aspires to become enlightened. He recommended reflecting on a verse from Nagarjuna’s ‘Root Wisdom’:

Reflecting on everything’s being empty of essential existence, the mind meditating on emptiness transforms into a white vajra standing on the moon at the heart.

“I do this practice every day,” His Holiness declared, “and you too can do it whenever you can.”

He recited a dedication prayer and the day’s session came to an end.