From an Average Student to being Honoured as one of its most Accomplished Alumnus: CTA President shares his story at Hansraj College

New Delhi: The President of Central Tibetan Administration, Dr Lobsang Sangay was conferred with the prestigious “Mahatma Hansraj Gaurav Samman’ award by Hansraj College, University of Delhi ‘for his stellar contributions to the cause of Tibet as an expert on International Human Rights and Conflict Resolution.’ The award citation also read ‘We humbly honour our alum, who is a leading political figure in Tibet and pray for greater laurels and an even more esteemed future,’

The award was in recognition of Dr Sangay as one of the most accomplished and illustrious alumnus of Hansraj College. 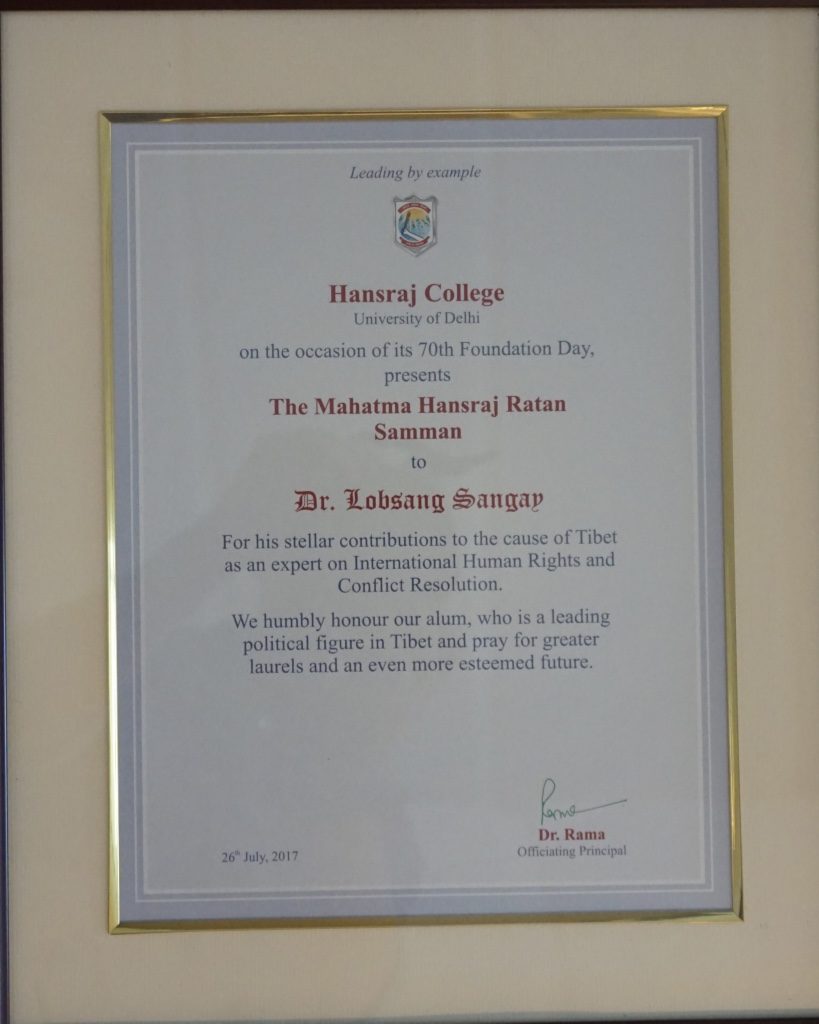 “For me to be here and to receive the award means a lot because this award reflects the generosity of Hansraj. Hansraj gave me the passion and freedom to do the things that I wanted to do for the Tibetan cause,” President Dr Sangay said as he humbly accepted the award.

“I wasn’t necessarily a good student and had been called in the Principal’s cabin for lack of attendance. But I must confess my attendance was bad but for a cause; for Tibetan cause,” said the President to a hall packed with dignitaries, students and faculty of Hansraj College.

For most of his academic years in Hansraj, President Dr Sangay revealed he had been actively engaged in protests and activities for the Tibetan cause.

“If you combine the two attendance at Hansraj college and Chanakyapuri police station near the Chinese Embassy-where the protests were held- then my attendance would be 100 per cent,” President said, drawing a thunderous applause from the faculty and students.

The President said he was fulfilling his academic requirement at Hansraj, at the same time, fulfilling the spirit of Mahatma Hansraj and Indian freedom fighters by protesting at the Chinese embassy.

“On a bigger level, this award reflects the generosity of India; this great country. Because no other country has done for Tibetan people and His Holiness the Dalai Lama than this great Government and People of India,” said the proud President.

Stressing that the Tibetan movement was born on Indian soil and based on Indian ethos and spirit, Dr Sangay further said, “I just want to remind you all that the original made in India is the Tibetan movement. The cornerstone of Tibetan freedom movement is based on the Indian philosophy of ahimsa. Tibetan democracy is modelled on Indian democracy. Most of the present leaders in Tibetan Administration and movement were born, brought up and educated in India.”

“Therefore we have to succeed and when we succeed, India will succeed,” he said.

Dr Priti Dharmara, an Associate Professor at Hansraj College said, “we are really feeling proud to have honored Dr Sangay on the 70th foundation day of the college, when we heard about his passion for the Tibetan movement and the ground for this passion is Tibetan movement, we really felt more proud.”

Dr Sangay’s alma mater also presented him with a framed copy of his admission form. 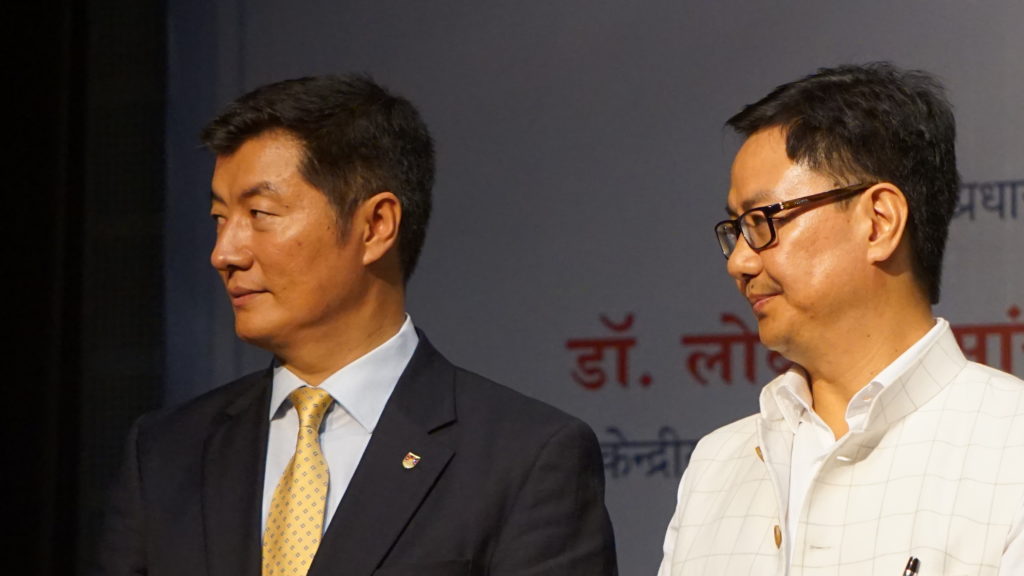 CTA President Dr Sangay, along with Shri Kiren Rijiju, Minister of State for Home Affairs, an alumnus of Hansraj College

Along with Dr Sangay, Shri Kiren Rijiju, Minister of State for Home Affairs, and an alumnus of Hansraj College was also conferred with the “Mahatma Hansraj Gaurav Samman” award.

President Dr Lobsang Sangay studied English Literature at Hansraj College, Delhi University from 1988 – 1991. During his college days, Dr Sangay was the President of the Regional Tibetan Youth Congress (RTYC) and a prominent Tibetan activist. Following his studies in Delhi University, Dr Lobsang Sangay went to Harvard University in 1995 from where he received Doctor of Judicial Science (SJD), Harvard university’s most advanced law degree, on a Tibetan Fulbright scholarship programme. 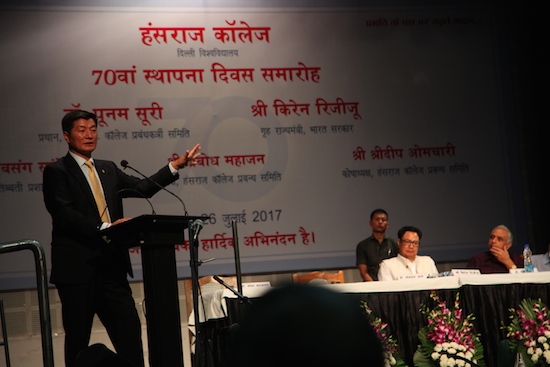 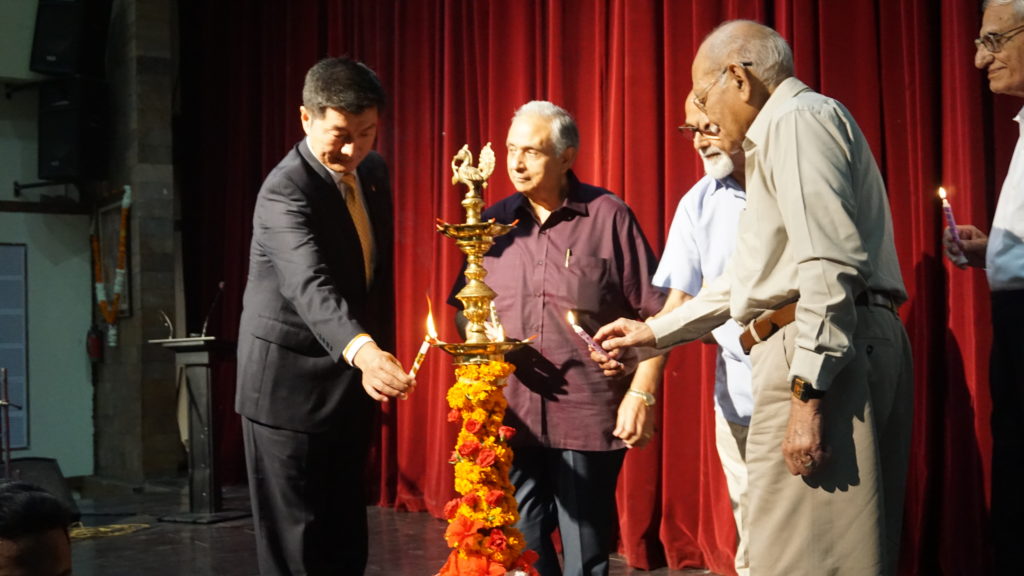