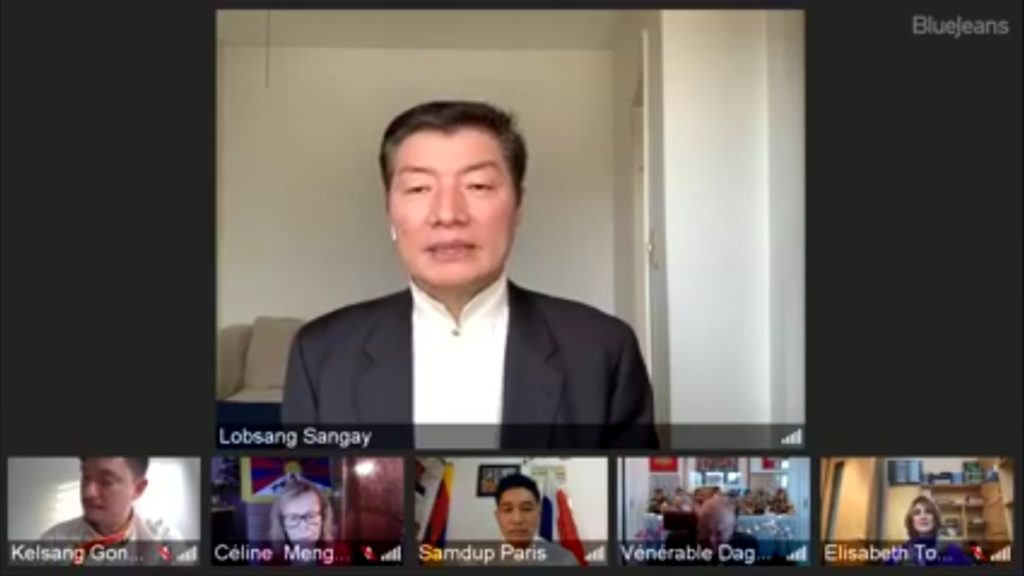 President Dr Lobsang Sangay speaking at the virtual celebration of 31st anniversary of conferment of Nobel Peace Prize on His Holiness the Dalai Lama organised by the Tibetan community in France.

Paris: The Tibetan community in France organised an impressive virtual celebration of the award of the Nobel Peace Prize on His Holiness the Dalai Lama. It was participated by an eminent group of panellists. Ven. Penpa introduced the significance of the day and reaffirmed the Tibetan community’s pledge to abide by guidance of His Holiness the Dalai Lama.

President of Central Tibetan Administration Dr. Lobsang Sangay in his tribute extolled the extraordinary leadership of His Holiness the Dalai Lama in the early turbulent years of exile. Through his steadfast commitment to promotion of global peace, human values, religious harmony, protection of Tibetan culture and language and the latest effort by His Holiness, the revival of ancient Indian tradition, Dr Sangay said His Holiness has put the global spotlight on China’s occupation of Tibet and the importance of Tibetan culture and language for the world.

President Sangay further went on to explain growing momentum of support for Tibet in the recent times. In the recent months, he said, a Tibet has gained tremendous momentum in the United States. Sikyong’s visit to State department in October and to the White House in November were singular developments.

In the same vein, he urged the European Union, European countries and in particular France to openly and formally recognise the Central Tibetan Administration. He said he look forward to official meetings with leadership of `European countries. As part of the celebration, Sikyong also launched the music video produced by the Tibetan Community to pay homage and gratitude His Holiness the Dalai Lama. 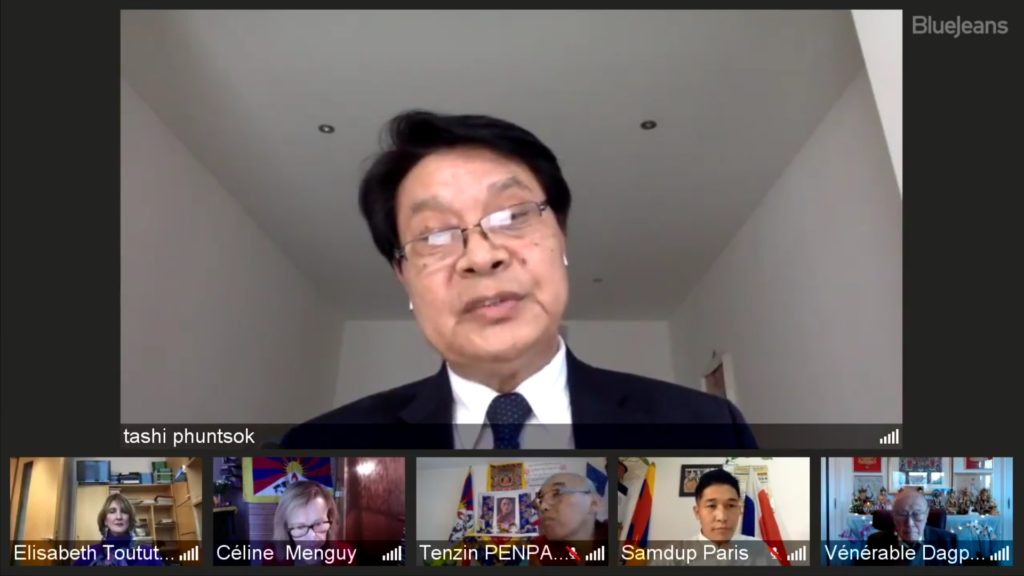 Speaking of the early years of exile, Representative Tashi Phuntsok reminded the panellists that ‘the sky and the earth were our only friends, as His Holiness lamented in despair then’. From that humble beginning rose the robust Tibetan Administration which is hailed today as one of the most robust refugee communities in the world, he notes, adding that the award of the Nobel peace prize on His Holiness became incredibly significant in terms of global recognition and the success story of Tibet. He however strongly urged to remember those dark decades as he believed that ;those who forget the past are doomed’.

Ven. Mathieu Richard recounted some inspiring experience with His Holiness. He noted that His Holiness’ contribution go beyond the Tibetan cause, to benefitting the entire humanity. During his some 20 visits to Tibet, Ven Richard said he has always been moved by the unflinching devotion that the Tibetans inside Tibet hold for His Holiness the Dalai Lama.

Madam Elisabeth Toutut-Picard, President of Tibet Support at France National Assembly, applauded His Holiness’ acceptance of Nobel Peace Prize in 1989. ‘His Holiness expressed his gratefulness on behalf of all human beings who were oppressed all over the world struggling for freedom and peace in their respective countries. Therefore on this anniversary, my thought and prayer goes not only Tibetans who are suffering but also to all people who are suffering because of race, religion and different political opinions,’ she said. As President of the Tibet Support Group in the French National Assembly, she affirmed unwavering support for Tibet. 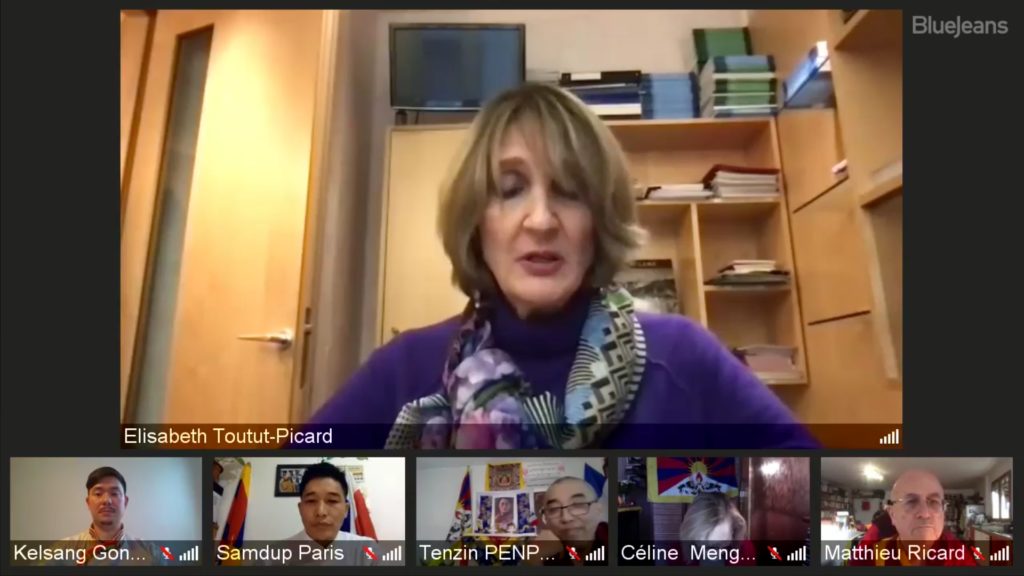 Mr. Jean-luc Romero-Michel, Deputy Mayor of Paris expressed his gratitude to His Holiness the Dalai Lama whom he described as man of peace, defender of universal rights, tireless advocate of humanistic values. For years we have been admiring his peaceful commitment and we are extremely proud that Paris counts His Holiness the Dalai Lama amongst it’s honorary citizens, he said. He said that His Holiness should be officially received in France in his future visit to the country.

Mr. Pema Jungney, Speaker of Tibetan Parliament in Exile, as requested by Tibetan Community in France gave a concise written presentation on the four principal commitments of His Holiness the Dalai Lama, namely, the promotion of of human value, religious harmony, protection of Tibetan culture and environment and the revival of the Nalanda tradition.

Ven. Dagpo Rinpoche explained that the Tibetan Buddhist texts are extant in many languages and had been taught in many universities around the world before 1959. However, except for few who could read the profound meanings could not be understood and widely known. The curiosity to learn all this text arose only after 1959 solely because of His Holiness’ teachings that spread around the world, he said. That has led to the revival of Nalanda tradition in India and Tibetan Buddhist in western countries, benefiting from Tibetan Buddhist wisdom.

Madam Jacqueline Eustache-Brinio, President of Tibet Support Group at France Senate stressed that the Dalai Lama has been advocating Middle Way Approach renouncing independence and fights for genuine autonomy enshrined in Chinese Constitution. He said genuine autonomy is what Tibet needs to safeguard its religion, language and culture.

The Group at the Senate, started in 2000, supported actions in favor of freedom of expression, safely guiding the culture and identity of Tibetan people. She assured that the group will continue to work with Central Tibetan Administration and Tibet Support Groups.

-Filed by Office of Tibet, Paris 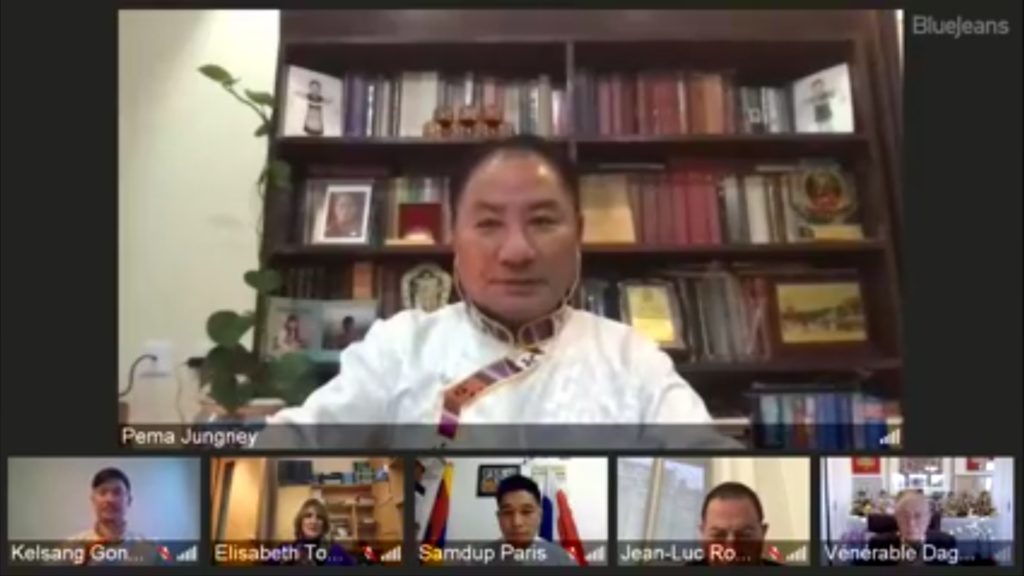 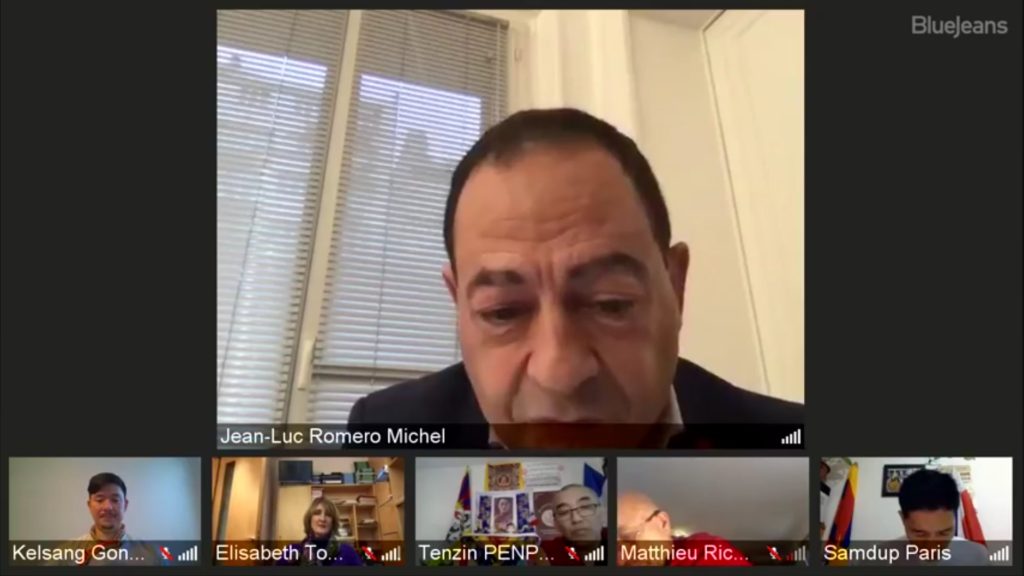 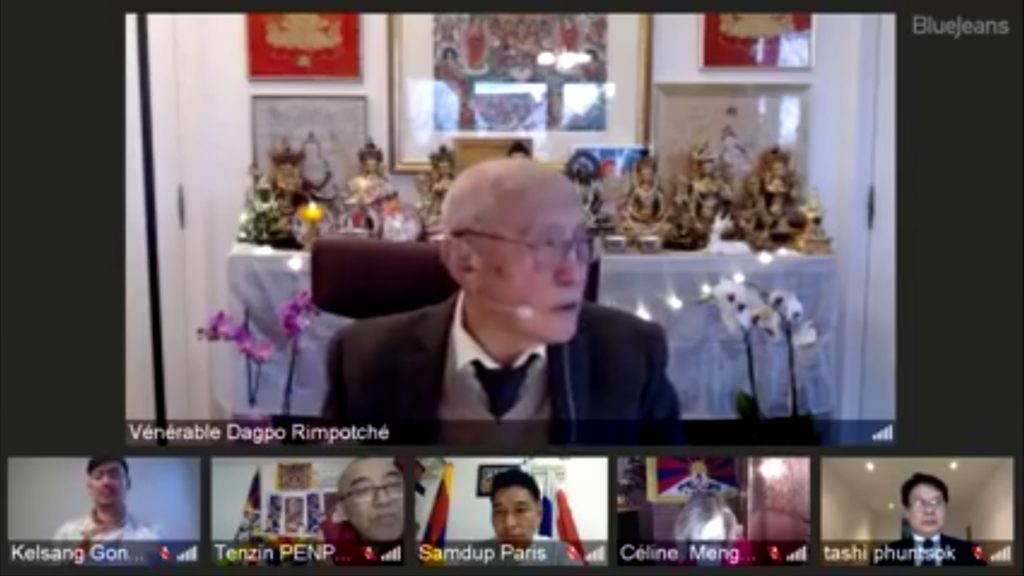 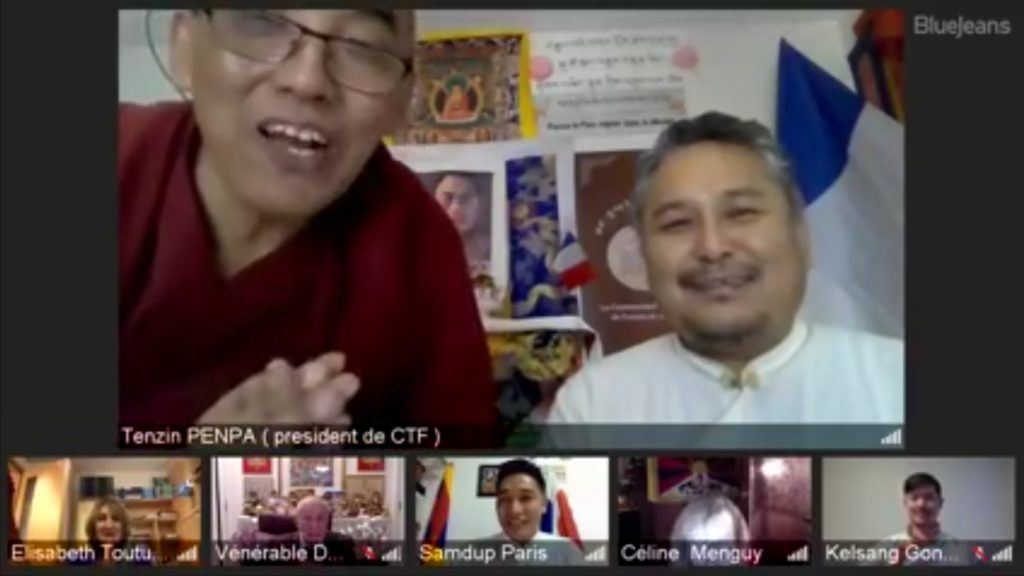 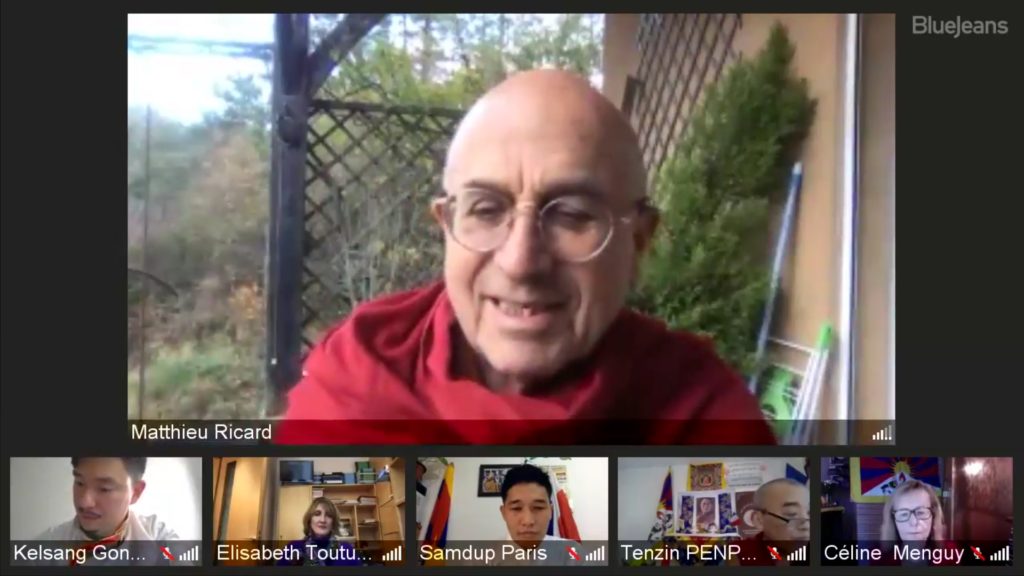 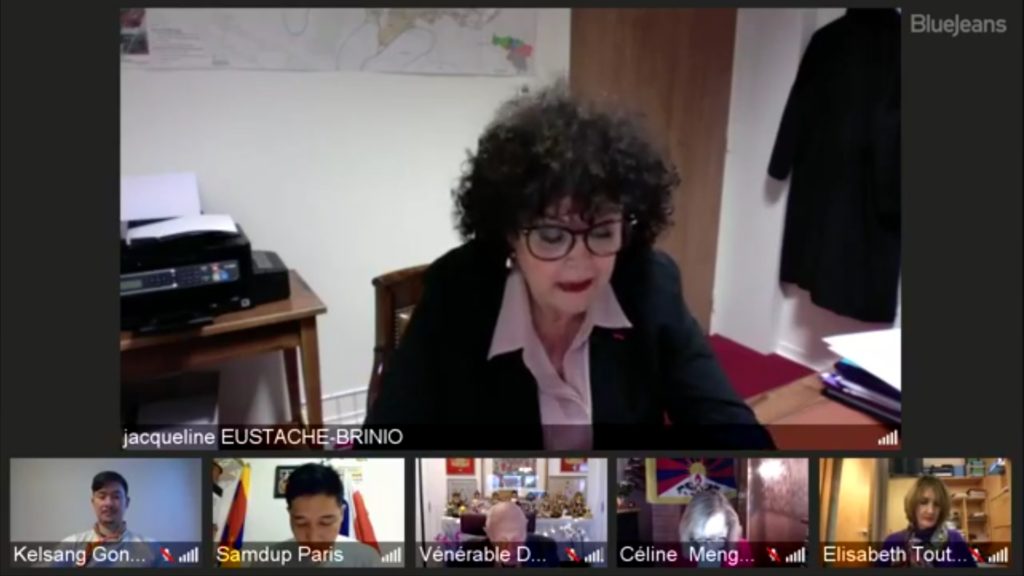