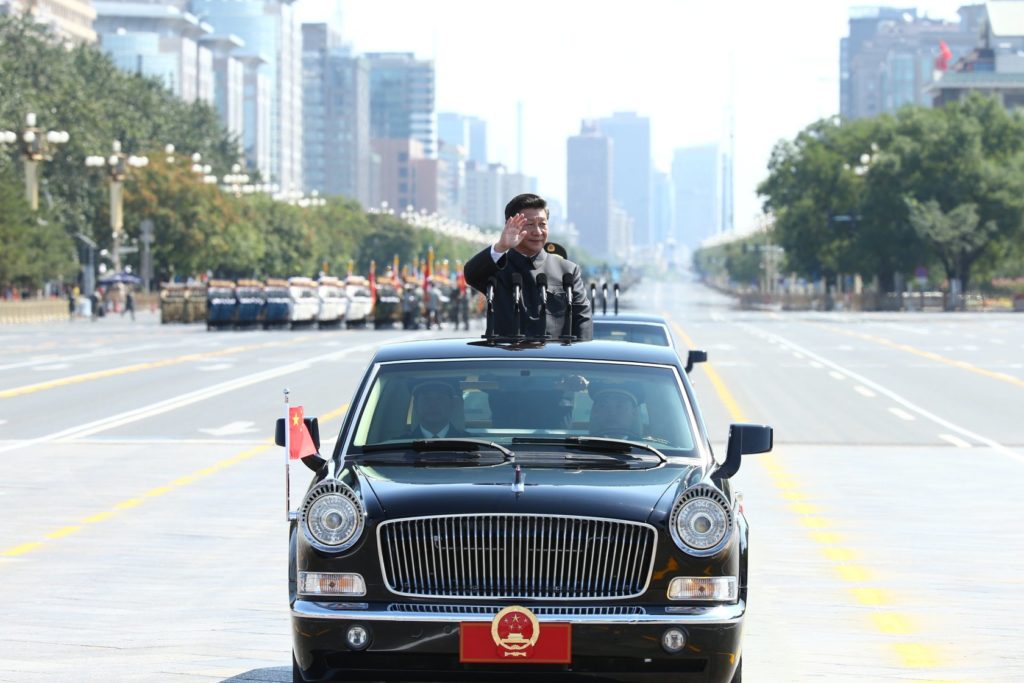 BEIJING, Sept. 3, 2015– Chinese President Xi Jinping inspects troops during the commemoration activities to mark the 70th anniversary of the victory of the Chinese People’s War of Resistance Against Japanese Aggression and the World Anti-Fascist War, in Beijing, capital of China, Sept. 3, 2015. (Xinhua/Chen Jianli via Getty Images)

According to the 2016 report by the U.S. Congressional-Executive Commission on China, there has been a broad corrosion of freedoms

Respect for human-rights and rule of law have deteriorated markedly during the term of Chinese President Xi Jinping, according to a new U.S. government report, which blames an ideological tightening within the Chinese Communist Party (CCP) as a slowing economy brings the legitimacy of its rule into focus.

The almost 80,000-word bipartisan U.S. Congressional-Executive Commission on China (CECC) 2016 report, released Thursday morning, raises long-festering issues such as repression of ethnic minorities in Tibet and Xinjiang, as well as the erosion of autonomy in the Special Administrative Region of Hong Kong.

However, the CECC notes a broader corrosion of freedoms, encompassing a social and political reinforcement of the supremacy of the CCP under Xi’s leadership, with deleterious consequences for civil society, media freedom, labor rights and judicial due process.

“Xi has overseen a deterioration in human-rights and rule of law conditions in China marked by greater consolidation of his own power — leading some analysts to draw comparisons to Mao Zedong — through forced ideological conformity and the systematic persecution of human rights lawyers and defenders,” says the CECC report.

Here are five areas the CECC deems to be of particular concern.

When China joined the World Trade Organization 15 years ago, it made commitments regarding enshrining financial fair play and judicial independence. However, the CECC report says that China has failed to implement substantive legal reforms, and instead of “rule of law” has become “rule by law — that is, using the law as a means to expand control over Chinese society while disregarding the law when it does not accommodate Party imperatives or advance Party objectives.”

Late last year, the U.N. Committee against Torture concluded that China had failed to eliminate torture, enforced disappearances, deaths in custody, and numerous other forms of ill-treatment in detention. The CECC says the Chinese authorities continue to use “black jails” and other forms extrajudicial detention to suppress individuals such as petitioners, rights activists and members of the banned socio-religious group Falun Gong.

Xi’s “tigers and flies” anti-corruption campaign has also seen accusations of torture and coerced confessions and even a spate of suicides by those in line for CCP disciplinary investigations.

“Xi is also looking to promote allies ahead of a major leadership transition next year,” Meredith Sumpter, Asia director of Eurasia Group think-tank, tells TIME. “His efforts to ensure that he will be able to fill the five available positions on the Politburo Standing Committee have included making political rivals targets of anti-graft probes.”

“Rule by law” has also increasingly been used to quash civil society, and groups and individuals working in what were previously acceptable areas are finding that they are under siege.

Much of this stems from Document No. 9, the internal CCP directive issued just as Xi came to power, which pointed to China’s flourishing civil society as a risk to the Party’s hold over society. “Advocates of civil society want to squeeze the Party out of leadership of the masses at the local level, even setting the Party against the masses, to the point that their advocacy is becoming a serious form of political opposition,” says the document.

To cite just one, sadly typical example, the Beijing Zhongze Women’s Legal Counseling and Service Center was shuttered in February 2016, despite more than two decades advocating for anti-domestic violence litigation and the protection of land rights for rural women.

The party is “determined to clamp down on any civil society that they deem to be a threat,” says William Nee, Hong Kong researcher for Amnesty International. “But what they consider to be a threat is really open to interpretation.”

Over the last three decades, CCP legitimacy has been inextricably linked to economic growth and raising the living standards of the Chinese people. But that legitimacy is facing unprecedented challenges as economic growth slows to the weakest annual rate in 25 years and economic liberalization flounders. Although the official urban unemployment rate at the year’s end was a mite over 4%, economists caution that the true unemployment rate was most likely higher.

The Hong Kong-based China Labour Bulletin (CLB) recorded 2,773 strikes and protests in China in 2015, more than twice that of a year earlier. The CECC also documented growing labor unrest, especially in the construction and manufacturing industries, as well as a government crackdown on labor advocacy.

Labor NGOs have long been subjected to various forms of harassment, often when their actions chaff with the interests of venal individuals connected to the CCP, but labor rights advocates have reported a comprehensive upping of pressure from late 2014.

One such advocate He Xiaobo, of the Nan Fei Yan Social Work Services Center, was previously fêted and even received government funding for his work assisting migrant laborers. However, in December 2015 authorities detained He and charged him with “embezzlement.” He is now free on bail.

More than a dozen other labor rights advocates have been similarly targeted, including the government award-winning Zeng Feiyang, director of Panyu Migrant Workers Center, who last week received a suspended sentence for “disturbing public order.” This was despite court records showing that government officials had approved of the collective bargaining agreement that was the spur for the charges.

“With the economy slowing down, the government is nervous, as workers have shown their ability to not just organize, but organize and win,” says CLB researcher Keegan Elmer. “The NGOs are a crucial part of the broader worker struggles in the country, and this ruling and crackdown were directed just as much at their struggles as they were at civil society and international labor rights.”

Freedom of the press has, of course, never been a strong point since the birth of the People’s Republic. This year, China ranked 176 out of 180 countries in Reporters Without Borders’ World Press Freedom Index, and was “the world’s worst jailer of the press” for the second year in a row, according to the Committee to Protect Journalists.

In addition, for the first time since 2012, a foreign journalist, French reporter Ursula Gauthier, was effectively expelled from China, owing to her critical coverage of the government’s ethnic policies in the Xinjiang Uighur Autonomous Region.

According to analysis by Washington-based advocacy group Freedom House, of government directives in 2015, prohibited topic areas were “far broader than mere criticism of the regime, dissident activities, or perennially censored issues ” (typically Taiwan, the personal wealth of CCP bigwigs, Tibet and the Falun Gong).

In November 2015, a Criminal Law amendment came into force that placed journalists at risk of criminally charges for “fabricating false reports” when covering “hazards, epidemics, disasters, and situations involving police.”

While attempting to report August’s stock market tumble, for example,Caijing Magazine journalist Wang Xiaolu was arrested for “suspected violations of colluding with others and fabricating and spreading fake information on securities and futures market,” according to state news wire Xinhua.

Sumpter says Xi has reigned in the growing autonomy that the media was enjoying under his predecessors, who allowed Chinese citizens — albeit with many restrictions — to connect with each other, access information and express views over the Internet.

“Xi thus came to power genuinely concerned about the legitimacy and long-term viability of the Party,” says Sumpter. “His primary pursuit as China’s leader has been to reform the Party and re-exert its influence and control over all aspects of the state.”

Increasingly, CCP directives exhibit a nationalist bent. The 13th Five-Year Plan, adopted this year, explicitly cites an intention to “spur a great rejuvenation of the Chinese nation” in line with the “Chinese dream.”

Authorities in Tibetan and Xinjiang autonomous areas continue with policies that further threaten indigenous culture, religion and language, even labeling ordinary religious activities by Uighur Muslims as extremism and terrorism. Self-immolation protests in Tibetan communities have slowed — perhaps, the CECC speculates, due to the authorities imposing collective punishment on the family members of self-immolators.

Outside of restive regions, there has been a clampdown on religious organizations deemed to be not under state control. An estimated 1,500 crosses from the steeples of churches have been removed, even though the churches were state-sanctioned. Some 20 churches have been completely demolished. In the Kaifeng municipality of Henan province, the local Jewish community has reportedly begun to experience government restrictions on religious activity.

According to Nee, the Beijing authorities are drafting ever more laws with a “national security” focus: “It seems to be the default position of the government that the penetration of ‘foreign forces’ can have a negative effect on China.”

The Chinese government has not yet commented on the CECC report, but has previously defended its own human-rights record while criticizing the U.S. “The U.S. is notorious for prison abuse at Guantanamo prison, its gun violence is rampant, racism is its deep-rooted malaise,” Chinese diplomat Fu Cong told the U.N. Human Rights Council in March.