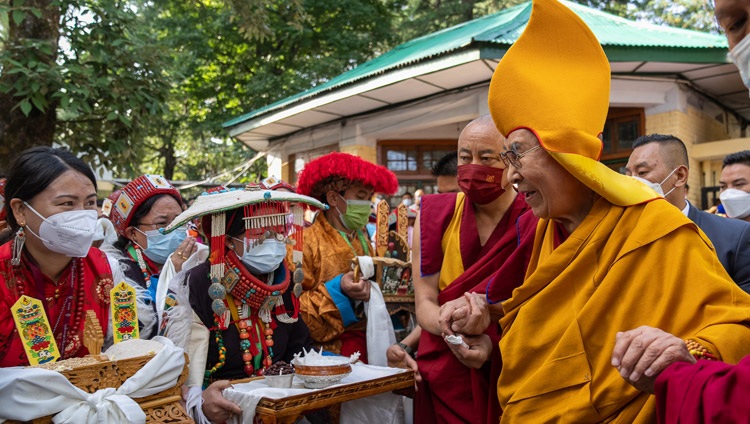 Members of the Tibetan groups who organized the Long Life Offering holding traditional offerings of welcome as His Holiness arrives at the Main Tibetan Temple court yard in Dharamsala, HP, India on June 24, 2022. Photo by Tenzin Choejor

As horns were played in welcome, His Holiness walked from the gate to his residence through the temple yard. On this occasion he wore his Pandit’s hat. He beamed with smiles as he waved to members of the public and dancers who had gathered to greet him. Garlands of flowers adorned the pillars of the temple.

Venerable Samdhong Rinpoché, seated directly in front of His Holiness in the body of the temple, led a ceremony based on prayers to White Tara, the Wish-fulfilling Wheel. He was supported by the Chant-master and monks of Namgyal Monastery. The prayers included ‘Clouds of Ambrosial Blessings‘ by Trulshik Rinpoché, which reviews the qualities of the line of incarnations of Avalokiteshvara that include the Dalai Lamas.

Eight hundred people bearing offerings to His Holiness took part in processions making their way through the temple before him. 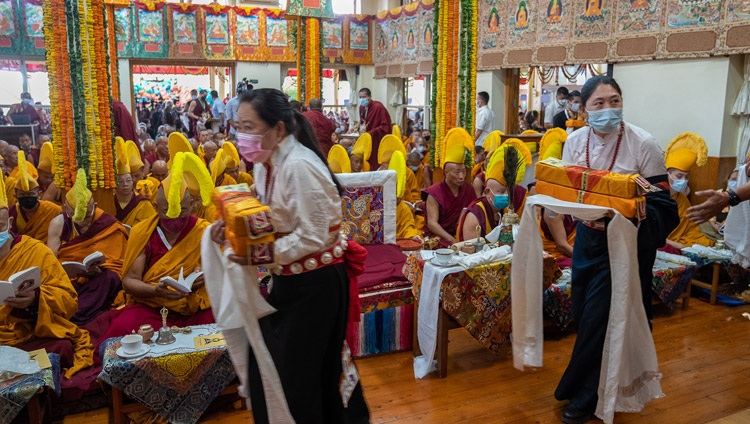 Members of the Tibetan groups who organized the Long Life Offering Ceremony holding offerings as they walked in front of His Holiness the Dalai Lama in the Main Tibetan Temple in Dharamsala, HP, India on Jun 24, 2022. Photo by Tenzin Choejor

When it came to the time to offer the mandala, the gods and goddesses need to be reminded of how much His Holiness has done. Ven Samdhong Rinpoché stood before His Holiness and recited a eulogy and request during which he summarised the accomplishments of the lineage of Dalai Lamas and the Ganden Phodrang and their contribution to Tibet. He suggested that His Holiness 14th Dalai Lama’s achievements surpass those of the 5th, 7th and 13th Dalai Lamas combined.

“You’ve been here among us to serve the Dharma and all humanity,” he said. “You’ve taught us the value of ‘ahimsa’—doing no harm, and ‘karuna’—compassion, inter-religious harmony, and a sense of the oneness of humanity in the context that everyone wants to be happy and not to suffer.

“You’ve encouraged us all to understand that conflicts and disputes should be solved through dialogue and diplomatic means. You’ve brought benefit to Tibet by strengthening the Tibetan identity, introducing democracy and improving education in schools and monasteries. To settle the question of Tibet you have introduced the Middle Way Approach.

“These are some of the ways you have contributed to the welfare of Tibet and humanity at large. These are things that everyone can see and which have been acknowledged when you were awarded the Nobel Peace Prize, the Congressional Gold Medal, the Templeton Prize and so forth. Please live long to be able to continue to benefit not only Tibetans but the whole of humanity.”

Ven Samdhong Rinpoché reciting a eulogy and request in front of His Holiness the Dalai Lama during the Long Life Offering Ceremony at the Main Tibetan Temple in Dharamsala, HP, India on Jun 24, 2022. Photo by Tenzin Choejor

There was a recitation of a prayer for His Holiness’s long life composed by his Tutors, Ling Rinpoché and Trijang Rinpoché. It was followed by another prayer by Jamyang Khyentsé Chökyi Lodro that reviews His Holiness’s qualities in relation to the various spiritual traditions of Tibet.

“We’ve done the White Tara Long Life Offering,” His Holiness told the congregation. “We all have a strong karmic connection due to prayers we’ve made in the past. Because of this I also have a special connection with the people of Tibet. Although the affairs of Tibet have waxed and waned over the years, I think I have managed to do something to help.

“I’m in my eighties now, but I’m determined that even when I’m in nineties or past one hundred, I will strive to work for Tibet. I’m in good health and my brain is clear, so I intend to live for at least the next twenty years. The sun will shine once more on Tibet. Freedom will recover.

“Many in China are paying attention to the significance of Tibet. People around the world, scientists among them, are taking an interest in Tibetan traditions. The just cause of Tibet will persist and Tibetan culture will contribute to the welfare of the world.

“I’ve retired from political responsibilities and remain a guest of the Government of India here in the Kangra Valley, a location chosen for me by Pandit Nehru. We have a Tibetan Parliament and an elected leadership capable of dealing with political affairs. I’ve worked as hard as I could and now this old monk can spend more time on promoting human values. 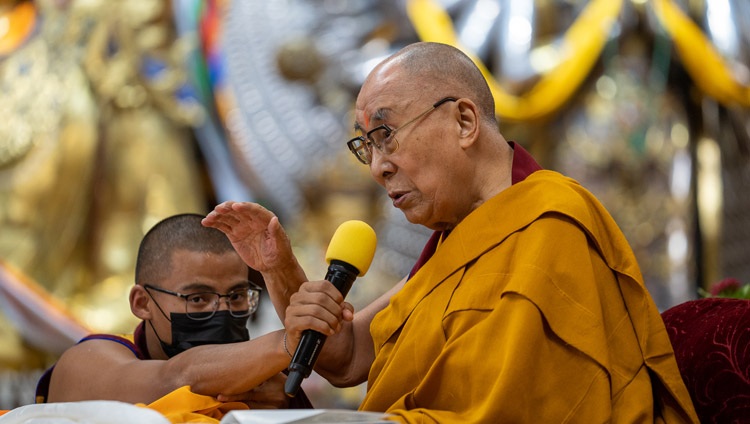 His Holiness the Dalai Lama addressing the gathering at the Main Tibetan Temple at the conclusion of the Long Life Offering Ceremony in Dharamsala, HP, India on Jun 24, 2022. Photo by Tenzin Choejor

“In my daily practice I focus on bodhichitta and emptiness. I generate bodhichitta every day in order to fulfil the purpose of others and myself. I have a special link to Avalokiteshvara, but I also feel that I may have studied with the great master Chandrakirti. From chapter six of his treatise ‘Entering into the Middle Way’, I reflect on verses 34-38 every day.

“The people of Tibet and the Buddhadharma of Tibet are constantly in my thoughts and the very least I can do is to make prayers for them—although today I’ve been able to rely on Samdhong Rinpoché to lead the prayers.

“You Tibetans must do your best. The worst times are past and now we have to look forward with hope. That’s all—thank you.”

Several concluding prayers were said culminating in the ‘Words of Truth’ that His Holiness composed here in Dharamsala in late 1960 and which ends:

Thus, the protector Chenrezig made vast prayers
Before the Buddhas and Bodhisativas
To fully embrace the Land of Snows;
May the good results of these prayers now quickly appear.
By the profound interdependence of emptiness and relative forms,
Together with the force of great compassion
in the Three Jewels and their Words of Truth,
And through the power of the infallible law of actions and their fruits,
May this truthful prayer be unhindered and quickly fulfilled.