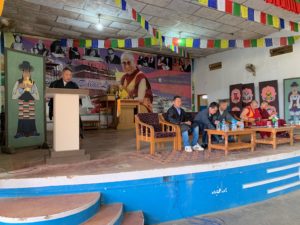 Dharamshala: CTA’s Finance Kalon Karma Yeshi visited Mundgod Doeguling Tibetan settlement on 23 June as part of the final leg of his official tour to the Southern Tibetan settlements. Kalon Karma Yeshi was accorded a warm welcome reception by the settlement officer, Chairman of the Local Tibetan Assembly, President of Regional Committee of Tibetan Freedom movement, President of Mundgod Cooperative Society and the staff. Likewise, the principal of the settlement’s school, representatives of the monasteries and local Tibetan clinics as well as representatives of the government and non-governmental organisation of the settlement also received Finance Kalon accordingly.

Thereafter, Kalon Karma Yeshi addressed the people of the settlement including the nuns from Jangchup nunnery. Finance Kalon reminded the gathering about the significant gratitude that the Tibetans across the world owe to His Holiness the Dalai Lama and thus urged them to strive towards fulfilling His Holiness’ wishes and aspirations. Kalon then spoke on CTA’s Middle Way Policy, its aims,  objectives, and its progress over time. Apart from that he also talked about the Five-Fifty Vision and various projects initiated under the respective departments of CTA especially the Gangjong Finance Development ltd under the Department of Finance.

On 24 June, Finance Kalon addressed the students and teachers of the local Tibetan school where Kalon spoke on the importance of remembering and realising the extensive contributions of His Holiness the Dalai Lama while urging them to excel in studies besides other curriculums. Following his address, Kalon Karma Yeshi toured the premises of the school including the school’s hostels.

On the third day, Kalon visited the offices of Local Tibetan Assembly, settlement office, the office of Regional Committee of Tibetan Freedom movement and Mundgod Cooperative Society. He also visited Mentsee-Khang of the settlement, old age home, and the monasteries and nunneries of the settlement including Gaden Shartse, Jangtse, and Nyingma monastery, etc.

On 26 June, Kalon visited Deprung Lachi monastery and addressed the monks where he clarified doubts and queries that were put forth by the monks.

After Mundgod visitation, Finance Kalon then left for Goa on 27 June to visit the Tibetan market association where he was greeted by the President of the Goa Tibetan Market Association who toured Kalon around the market and apprised him about the prevailing status of the market. The same evening, Kalon Karma Yeshi left for New Delhi thus successfully concluding his more than two weeks of official visitation to the various Tibetan settlements in Southern India.  In this journey, Finance Kalon was accompanied by the office assistant Soepa Gyatso. 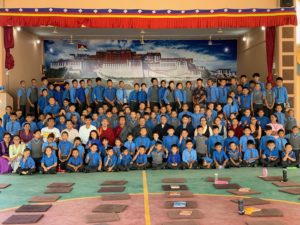 Finance Kalon Karma Yeshi with the students of Sambhota Tibetan School, camp 6 of the settlement. 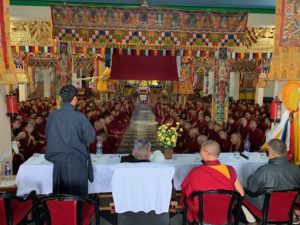 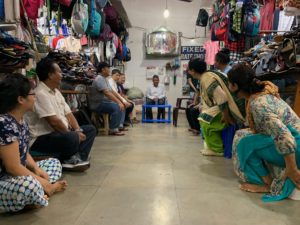