15th November 2020, Bhubaneshwar: The land of Odisha which had played an important role in preserving and the invention of Tibetan script witnessed the felicitation of Dr Debi Prasanna Pattanayak, Padma Shri recipient, Founder and former Director, Central Institute of Indian Linguistics, Mysuru and President, Indo-Tibet Friendship Society, Odisha. Considering his immense contribution towards the research and education of Bhoti language with his advanced age, the Core Group for Tibetan Cause – India headed by Shri Surendra Kumar, National Co-Convener and Smt. Ruby Mukherjee, Regional Convener has organized the felicitation program.

Given the pandemic situation, the guest list was restricted to a limit and accordingly, the duration of the event observed was also very short. The event started with the offering of lamps, national anthems of India and Tibet, and expression of solidarity in condolence with martyred Tibetan people. A brief outline was presented by India Tibet Coordination Office, Delhi Coordinator Mr Jigmey Tsultrim which was then followed by the address of Shri Surendra Kumar.

Shri Kumar lamented upon the restoration and education work in the field of languages that witness the renaissance of the cultural identity of indigenous inhabitants including Tibetan people. He acknowledged the foundations of Indian Tibet Support Groups precisely of Indo Tibet Friendship Society that produced great minds and deeds among the Indian community from Jayaprakash Narayan, Ram Manohar Lohia to George Fernandes and Rabi Ray. He personally extended gratitude to Dr D. P. Pattanayak for accepting the invitation to be part of this felicitation event and delivering his address.

Dr Bishwajit Roy, National Convener, Rashtriya Yuva Sangathan, Odisha hinted the need to accelerate more events upon Tibetan cause in every corner of Odisha. He shared about his experience of his visit to Phuntsokling Tibetan Settlement with peace marchers of Gandhian thoughts in 2019 and expressed his fullest support in every possible way to the Tibetan Cause.

Dr D. P. Pattanayak in his address shared the beginning of his interest in Tibet which dates back to the beginning of his political career in the early fifties. He stated that if the Prime Minister of India Jawaharlal Nehru had not turned down the offer of Maharaja Gyanendra Bahadur of Nepal and Maharaja Hari Singh of Jammu & Kashmir for the unconditional merger of their countries with India the history of India would have been different. There was then trade, commerce and cultural exchange with Tibet and today the condition of Tibet is miserable and distressful.

As Dr Pattanayak learnt that Padmasambhava from Odisha journeyed to Tibet and established Lamaism or Vajrayanism, he felt extremely proud that Lamas took the script of Odia and designed Tibetan script on the basis of it. He pointed out the reference of Lama Taranath’s historical book on Buddhism in Odisha (1608), Dr Bimalendra Mohanty’s book on Padmasambhava which is now translated into Sikkimese, Bhutanese and Nepalese languages.

Moving from this, he expressed grave concern with the occupation of Tibet which is now being experienced by Hong Kong and Taiwanese people. He shared about his personal experience being present on the eve of the transfer of power from British to Chinese Communist Government and subsequently the forced imposition of Mandarin upon the Cantonese speaking Hong Kong people. From the destruction of Buddhist monasteries to forced Sinification, the forced imposition of Mandarin upon Tibetan Schools inside Tibet to the disapproval of marriages between ethnic Tibetans is highly condemnable and deplorable.

With these pains, Dr Pattanayak along with late Shri Rabi Ray, former Lok Sabha Speaker decided to establish a regional office of Indo-Tibet Friendship Society which finally established in 2003 and its publication in 2004. Dr Pattanayak concluded his address with his experience of sharing the fortunate opportunity of presenting the publication to His Holiness the Dalai Lama during his visit to Bhubaneshwar in 2018.

Taking the opportunity, the Core Group for Tibetan Cause – India also expressed deep gratitude towards the commitment of late Rabi Ray by felicitating Shri Deba Prasad Ray, nephew of Rabi Ray. In his address, Shri Ray expressed his reconsolidation of commitments for the cause of Tibetan people and announced that Lohia Academy shall always be available for any event related to the Tibetan cause.

Smt. Ruby Mukherjee in her statement made the very vocal remark that it is high time for the Tibetan people to be given due recognition by the Government of India. She added that she has been blessed and fortunate to be part of this event in educating herself upon the contributions made by Dr D. P. Pattanayak in different fields of study and activism.

Mr Palden Tsering, TSO Phuntsokling, Odisha in his address shared his gratitude for being part of the felicitation program, the existing condition and aspirations of Tibetan community in Odisha and continuous support received from the people and Government of Odisha. He also informed the audience about the celebration of “Year of Gratitude towards His Holiness the Dalai Lama” and the ‘four major objectives of His Holiness the Dalai Lama’. 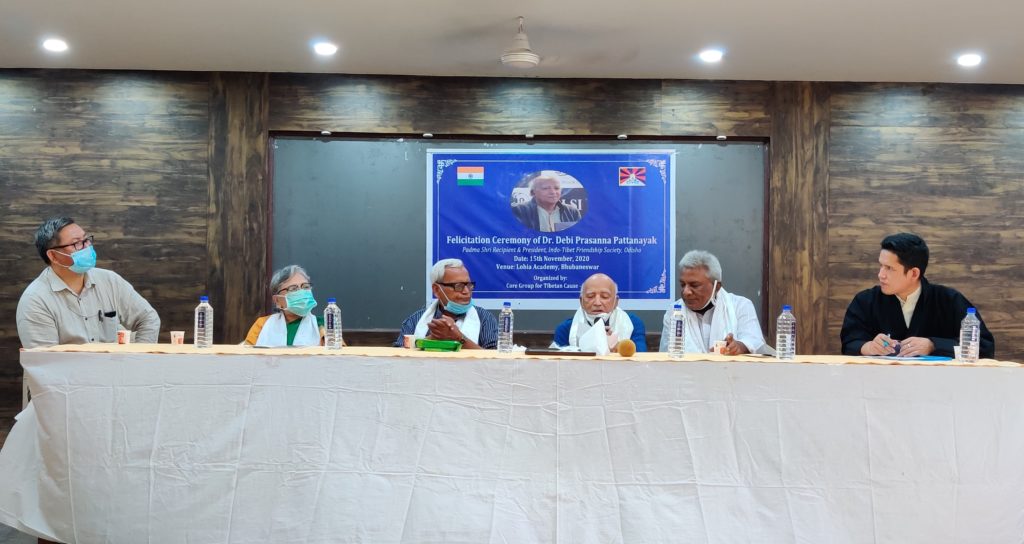 Dignitaries offering lamp at the event.

Local media coverage of the event.