Exile has been a blessing for Tibetan culture, religion and identity to thrive: His Holiness the Dalai Lama on Chotrul Duchen 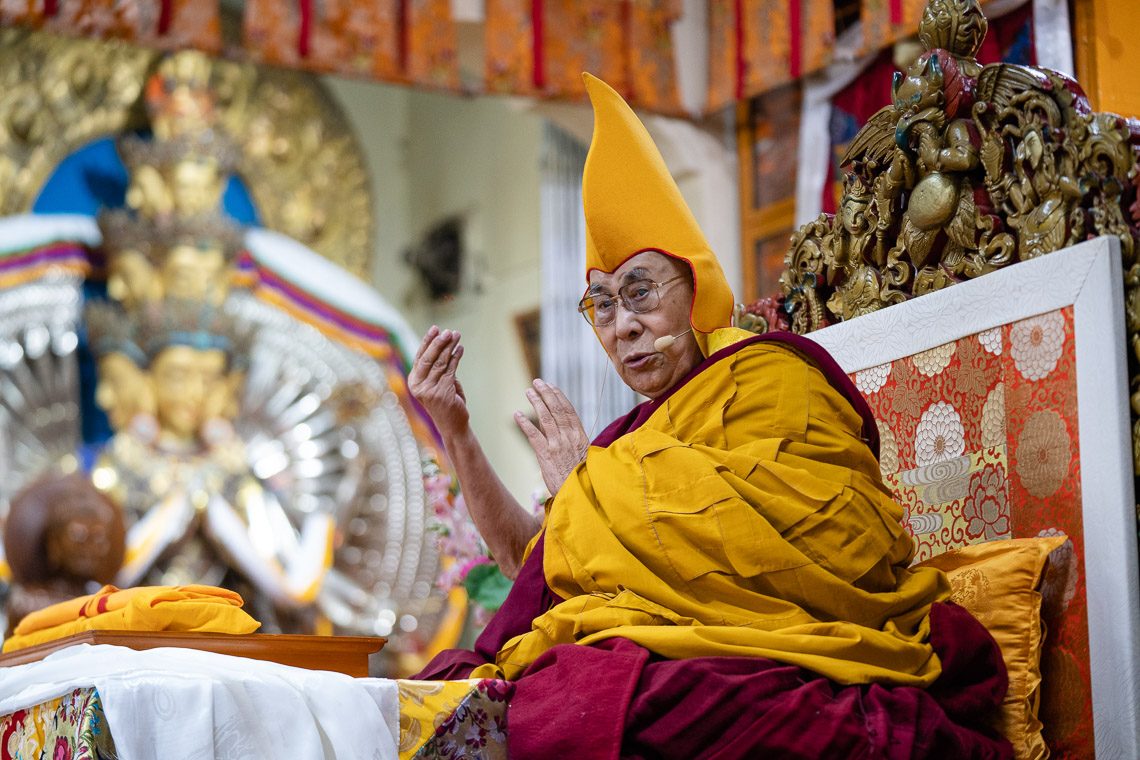 His Holiness the Dalai Lama giving teachings on the final day of the Great Prayer Festival at Tsuglagkhang, Dharamshala on 19 February 2019. Photo/Tenzin Choejor/OHHDL

Dharamshala: Marking the festival of Chotrul Duchen, one of the four major Buddhist holidays observed by Tibetan Buddhists on the fifteenth day of the first Tibetan month, His Holiness the Dalai Lama gave teachings on the Jataka Tales, the Eight Verses of Mind Training and the Praise to the 17 Nalanda masters.

The first fifteen days of the Tibetan lunar year celebrate the fifteen days on which—in order to increase the merit and the devotion of future disciples—Buddha displayed different miracles.

Every year on the occasion of Chotrul Duchen, His Holiness the Dalai Lama gives teachings on the Jataka Tales. The tradition began with Je Tsongkhapa, who in 1409 founded the Great Prayer Festival, the Mönlam Chenmo. The festival was celebrated for 550 years in Lhasa and continues today.

Among the scores of devotees at today’s discourse were the officials and staff of Central Tibetan Administration including the heads of the Autonomous bodies, Speaker of Tibetan Parliament-in-Exile, Kalons, Members of Tibetan Parliament, Secretaries and other functionaries.

Kalon Karma Gelek Yuthok, Department of Religion and Culture made an auspicious offering of the mandala to His Holiness the Dalai Lama on the occasion.

Speaking to the officials of the Central Tibetan Administration and Tibetans present, His Holiness exuded pride and conviction that the Tibetan people, despite facing adversities, have remained steadfast in their commitment to the cause and preservation of Tibetan religious and cultural heritage.

“The undaunted and unwavering spirit of Tibetans in Tibet and the committed efforts of those in exile have ensured that the Tibet issue is not forgotten,” His Holiness said.

“Tibetans who live freely in exile are a source of hope to their brothers and sisters in Tibet. And likewise, Tibetans in Tibet have remained our inspiration.”

In retrospect, His Holiness said he saw the six decades of Tibetan exile as “a blessing in disguise”, an opportunity to re-invigorate Tibetan identity as a people of unique culture, heritage and religious tradition.

“Today our culture and religion have garnered admiration and respect from all corners of the world. And, unlike other religious traditions, Tibetan Buddhist tradition can confidently engage with modern scientists.” the Tibetan spiritual leader said on Tuesday.

“These are fruition of the farsighted and visionary leadership of the great dharma kings, erudite scholars and masters of Tibet. Today, the six million Tibetans are more united than ever.”

His Holiness implored that in harnessing the potential teachings of the culture and religion, Tibetans are in a unique position to serve the good of humanity. “We must make our efforts and time in exile meaningful and worthwhile.”

He concluded his remarks with a hopeful statement that the just cause of Tibet will soon prevail and acknowledged the contribution and dedication of all former and present leaders and members of the Central Tibetan Administration.

In his two-hour-long teaching session, His Holiness explained how Tibetan Buddhism was akin to an heir to the Nalanda Tradition with the Tibetan language offering the most accurate explanation of Buddhist canons.

“Tibetan Buddhist literature not only contains the largest number of texts, it presents the best translations and most comprehensive Buddhist canons. Tibetan translations that comprise Kagyur and Tengyur are the largest body of Indian Buddhist texts anywhere in the world.”

He said the Tibetan script was refined at the time based on an Indian model. Tibetan dharma king Trisong Detsen invited Shantarakshita from Nalanda University to establish Buddhism in Tibet. “This is how we came to adopt the Nalanda Tradition, which involves an intense study of philosophy using reason and logic.”

“The tradition of rigorous study, practice using logic has enabled Tibetan scholars to successfully engage in two-way dialogue with modern scientists. If we wish these traditions to survive now we have to engage them with our intellect.”

His Holiness also gave short teachings on the Eight Verses of Mind Training (Tib. བློ་སྦྱོང་ཚིགས་རྐང་བརྒྱད་མ་) and Praise to the 17 Nalanda Masters.

His Holiness said he received the first teaching on the text from Tadrak Rinpoche and later from Kyabje Trichang Rinpoche, His Holiness’ former senior tutor.

The first seven verses of the Eight Verses for Training the Mind deal with the practices associated with cultivating the method aspect of the path such as compassion, altruism, aspiration to attain Buddhahood, the wisdom aspect of the path. 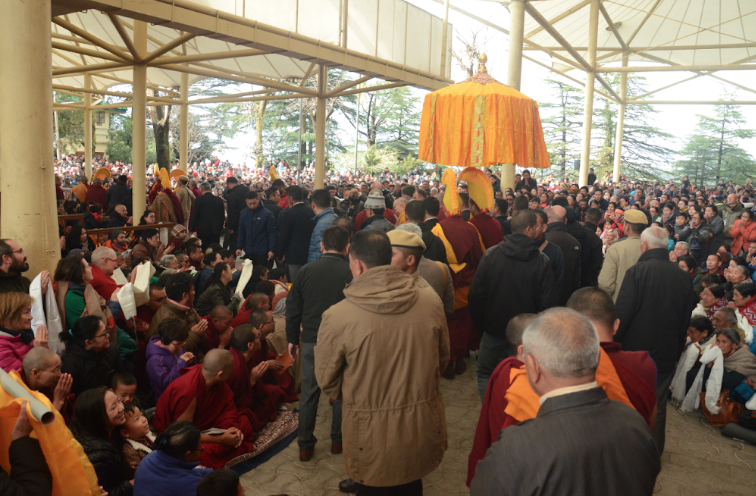 Devotees greeting His Holiness the Dalai Lama as he departs the teaching venue, 19 February 2019. Photo/Tenzin Jigme/CTA 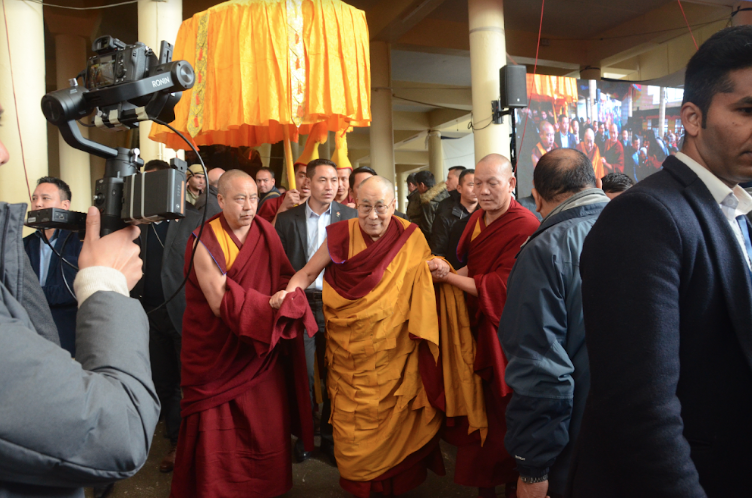 His Holiness the Dalai Lama after concluding his teachings on Jataka Tales and other texts on the festival of Chotrul Duchen, 19 February 2019. Photo/Tenzin Jigme/CTA