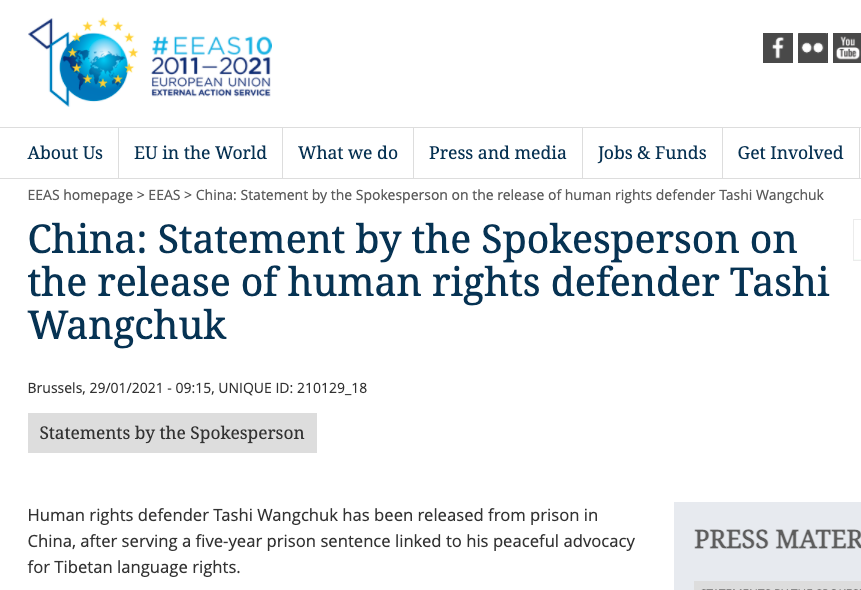 Dharamshala: A day after the world learned of Tibetan language rights advocate Tashi Wangchuk’s release from five-year imprisonment arbitrarily imposed by the Chinese government, the European Union issued a statement calling upon “the Chinese authorities to ensure that Mr Wangchuk’s release is unconditional and that he is able to enjoy his fundamental freedoms, including freedom of movement and residence.”

The EU has also urged the authorities to conduct a thorough investigation into allegations of mistreatment, torture and abuses on Mr Wangchuk while in detention.”

The statement further said: “The EU calls for the immediate and unconditional release of all those currently imprisoned in connection with the exercise of their rights and fundamental freedoms. Those in detention have a right to a fair trial and due process, and to decent treatment, free from torture and ill-treatment while in prison. The European Union will continue to engage with China on human rights issues.”

Tashi Wangchuk was wrongfully sentenced to five-year imprisonment for giving an interview to The New York Times about the Chinese policies of Sinicization of Tibetan language and the need to protect the Tibetan language, has been released after completing his term.

In January 2016, he was arbitrarily detained following the release of a documentary by The New York Times. While in detention, he was subjected to torture and repeatedly beaten during interrogations.

In January 2018, the 35-year-old Tibetan human rights defender was falsely charged with “inciting separatism” after being arbitrarily detained for more than two years. Representatives from the United States, Canada, the European Union and the United Kingdom were all denied entry to the trial held behind closed doors. In May 2018, a Chinese court in Yulshul sentenced Tashi Wangchuk to five years in prison and an additional five years of deprivation of political rights.

Information on Tashi Wangchuk’s health could not be ascertained at this moment except for his lawyer’s tweet.

Despite the Chinese Constitution guaranteeing the right to use and develop minority languages and as enshrined in the international human rights law, to ensure the protection of native languages critical to maintaining culture and identity. In practice, Tibetans face restrictions on freedom of religion or belief, and freedom of education in a minority language. It often incurs punishment in the form of detention, disappearances and deaths in detention.

View the official statement of the EU Spokesperson on their website here.