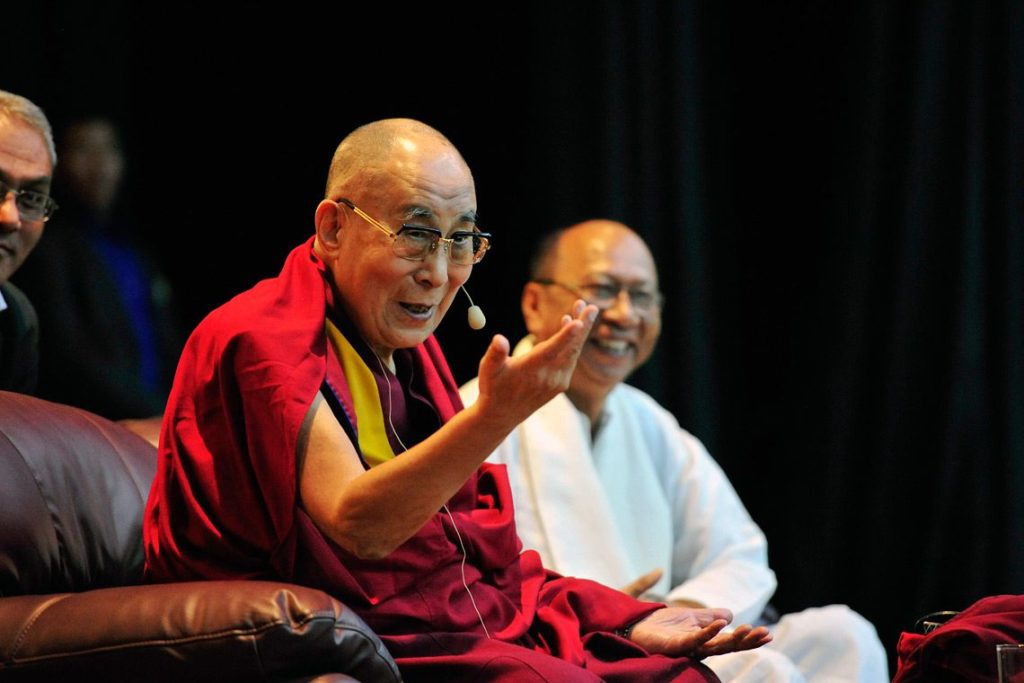 His Holiness the Dalai Lama speaking during the global conference on ‘Peace and Harmony’ organised by the Manipur state government on 18 October 2017. Photo/Lobsang Tsering

“I’ve been aware of Manipur since I was a child,” he told them in his introduction. “And now I am extremely happy to actually be here among you.

“Wherever I go, I always stress that as human beings we are all the same. We all want to live a happy life, which is our right, and the key to doing so is developing compassion for others,” His Holiness said.

“As a Buddhist monk, I believe all major religious traditions can help people find inner peace. They may employ different approaches and techniques, but each of them has the potential to help us become better human beings. Therefore, it’s important that there is harmony and respect among them. India is a living example that this is possible. Indigenous religions as well as traditions from elsewhere have lived here for centuries side by side in harmony.” His Holiness also suggested to members of the media that they too have a responsibility to promote a positive outlook, not dwelling solely on negative stories.

He told them it is important to highlight corruption and abuse of power wherever it occurs. However, they should also help people understand that our basic human nature is compassionate and that affection is essential to our survival.

His Holiness also spoke about global issues such as climate change and the growing trend of violence in the name of religion.

“Many of the problems we face today are of our own making,” His Holiness explained. “Why is this? Because we are subject to emotions without properly using our intelligence. Human beings are not fundamentally negative, but are prone to be swayed by anger and fear. We take such emotions for granted without realizing how destructive they can be.”

His Holiness also observed that challenges like climate change affect us all and that in today’s globalized world, communities and continents are interdependent. The idea of one side only securing victory, while the other suffers utter defeat is no longer realistic. Instead of seeking to solve problems by force, he said, we need to engage in dialogue.

While speaking about insurgency in the region, His Holiness the Dalai Lama spoke on the spread of “terrorism” across the globe and why religion has nothing to do with violence. There are no Muslim or Christian terrorists because terrorists are no more religious once they embrace terror, he said. “People cease to be Muslim, Christian or any group the moment they became terrorists.”

His Holiness urged modern Indians to pay more attention to the ancient knowledge of the workings of the mind that is part of their heritage.

“Our existing education system focuses on material goals such as money and power. The ancient Indian understanding of mind and emotions shows us how to develop inner peace, which is very relevant in today’s world. I believe India is the only nation that can combine this ancient knowledge with modern education and so make a significant contribution to world peace.”

Asked whether there would be a 15th Dalai Lama, His Holiness replied,

“Whether a 15th Dalai Lama is recognised is not my business. As early as 1969 I made clear that whether the institution of the Dalai Lama continues after me will be up to the Tibetan people to decide. I’ve also made it clear that when I’m between 85 and 90, I will discuss the future of the succession with Tibet’s other spiritual leaders.

“As far as political responsibility is concerned, I’ve been semi-retired since 2001 and completely retired since 2011, because we now have a democratically elected political leader. Not only that, I also proudly, voluntarily and happily put an end to the almost four centuries-old tradition of the Dalai Lamas being both the temporal and spiritual leaders of Tibet.”

A capacity audience of more than 700 people stood to greet His Holiness when he entered the auditorium.

Speaker Yumnand Khemchand Singh welcomed him on behalf of the entire state of Manipur and invited him to address the gathering.

His Holiness the Dalai Lama will return to Dharamshala today from Manipur via New Delhi. 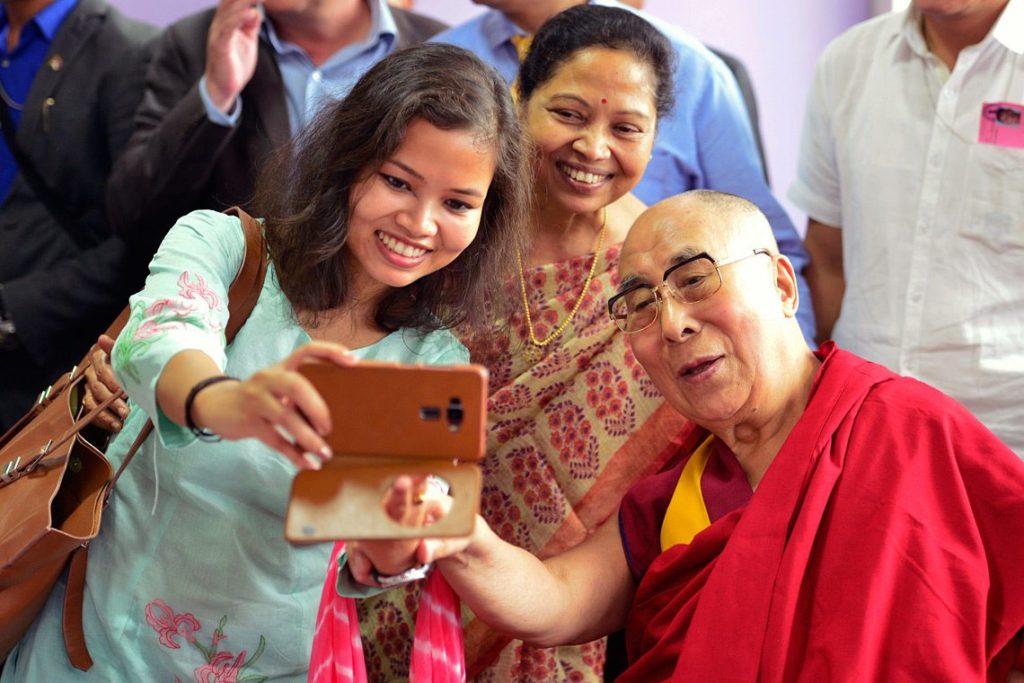 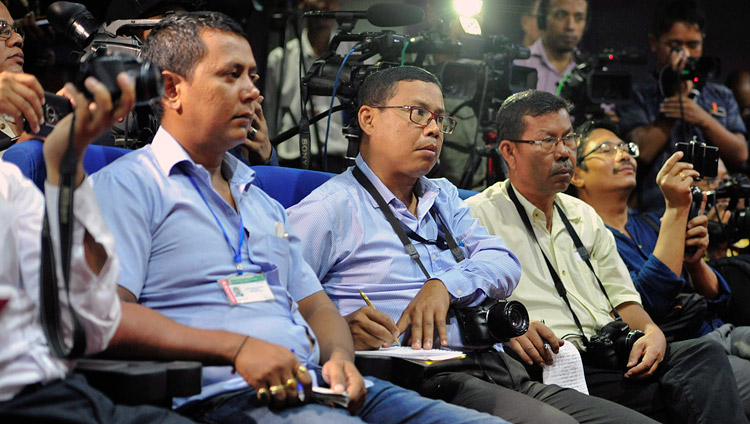 Members of the media listening to His Holiness the Dalai Lama during their meeting in Imphal, Manipur, India on October 18, 2017. Photo by Lobsang Tsering 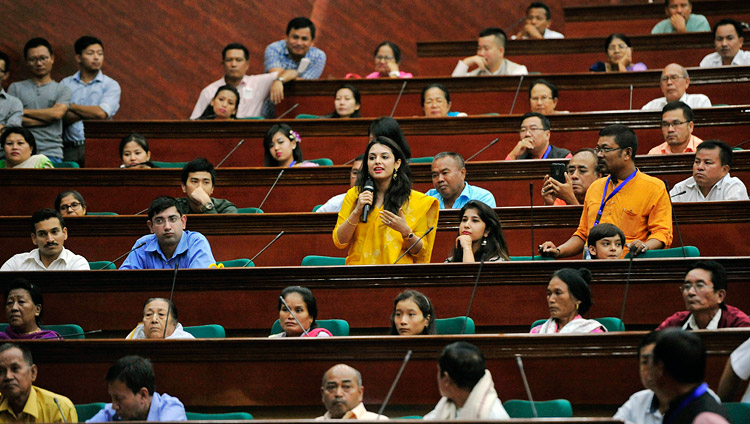 A member of the audience asking His Holiness the Dalai Lama a question during his talk at the City Convention Center hall in Imphal, Manipur, India on October 18, 2017. Photo by Lobsang Tsering