Embracing Oneness of humanity: The Highlight of His Holiness’ Talk at Frankfurt 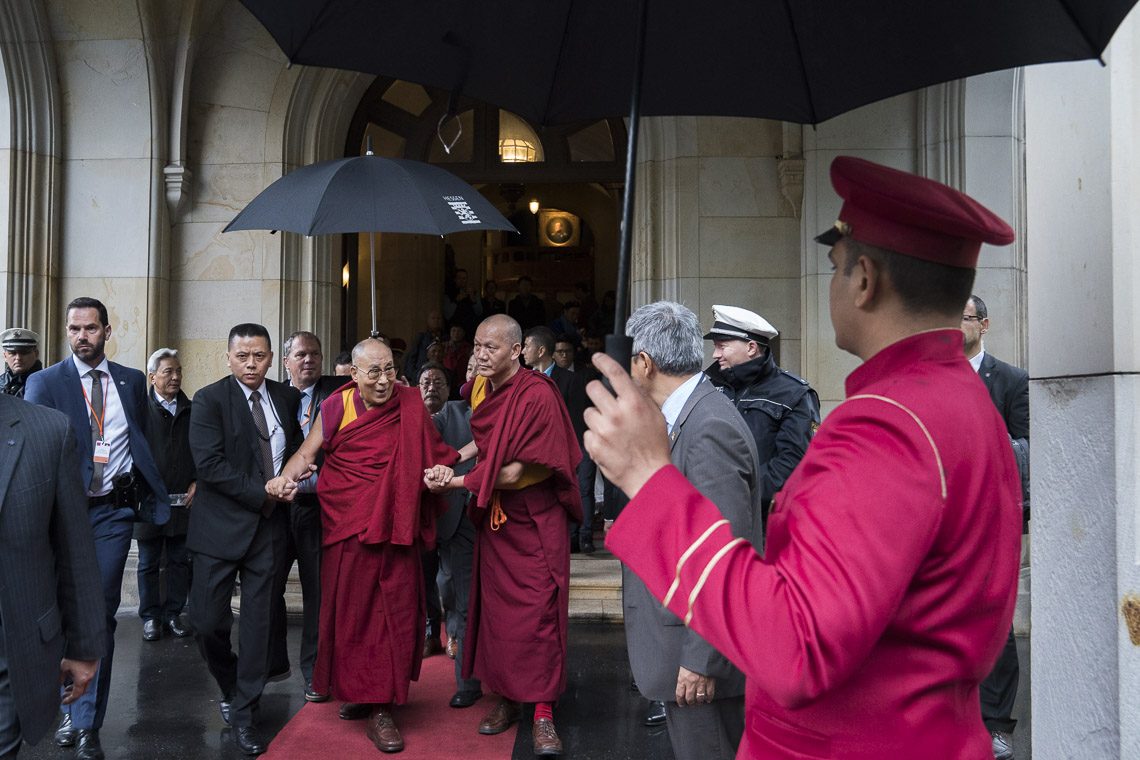 His Holiness departing from the Hotel and on his way to meet with the students and deliver a public talk at the Jahrhunderthalle convention center in Frankfurt, Germany on 13 September, 2017. Photo by Tenzin Choejor.

His Holiness the 14th Dalai Lama, in his address to the students, broached concerns over the sufferings of human beings, mounting from increasing violence, starvation, selfishness and indifference.

“There are a lot of problems in this 21st century. Leaving the natural disasters aside, most of the problems are our own creation. Why?”

“We are not considering others are brothers and sisters. My nation, their nation, my religious belief, their religious belief; are secondary level of differences and there are a lot of problems arising from these secondary levels of differences. The only remedy to this is by going to a deeper level and considering that the seven billion human beings are the same human brothers and sisters.”

“The future of the world is in our hands. Future depends on the present. Past is gone. We can only, learn from the past, we cannot change it.” 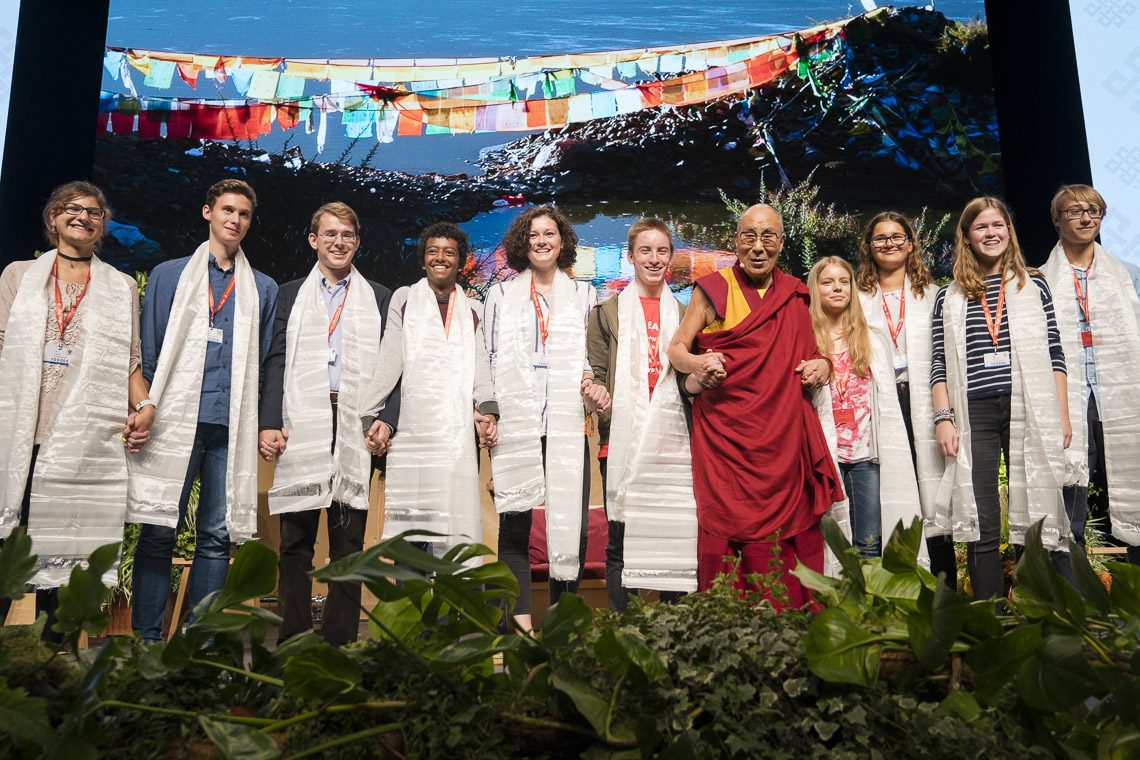 Students who asked questions during the dialogue of His Holiness the Dalai Lama wearing traditional Tibetan scarves offered to them in thanks by His Holiness in the conclusion of their program at the Jahrhunderthalle in Frankfurt, Germany on September 13, 2017. Photo by Tenzin Choejor

“Ever since I was born, I witnessed a lot of suffering, a lot of killing which is still prevalent today, while we are enjoying here in peace and with smiles. We are from the same planet, we are all human beings but some still suffer from violence.” His Holiness mentioned that the worst thing about the violence is that it is being carried out in the name of faith.

“That is today’s world! Can you remain indifferent? No! You must not remain indifferent to the pain of others. 7 billion human beings, each and everyone’s future depends on Humanity. Every individual can gain maximum benefits if humanity is happy but when there is turmoil in humanity then the individual cannot escape. So therefore, we have to take concern about the wellbeing of humanity”.

“We must consider the rest of the 7 billion human beings as our brothers and sisters and work together with the sense of oneness of humanity by sharing common interests about the future of humanity. In order to create a peaceful future we must create a more compassionate humanity.”

“When I say compassionate humanity, I am not saying that everyone should be a believer or a Buddhist. No! Never! It is better to keep your own traditional faith. Changing religion is not easy but in the mean time you can learn from each other.”

“Our generation is nearing its end. Now it is your responsibility, the 21st century generation, to make effort and to create a more compassionate world irrespective of whether you’re a believer or a non-believer. If you make effort now, then in your lifetime you will see a better world, a more peaceful world. “

Nearing the conclusion of his address to the student body gathered at the convention centre, he said, “Religious harmony is also very essential. All religious traditions carry the same message – the message of love, forgiveness, tolerance. All major religious traditions bring us these inner values.”

After His Holiness’ address, he participated in a question and answer session. The questions were brought forward by a handful of students representing the different schools. 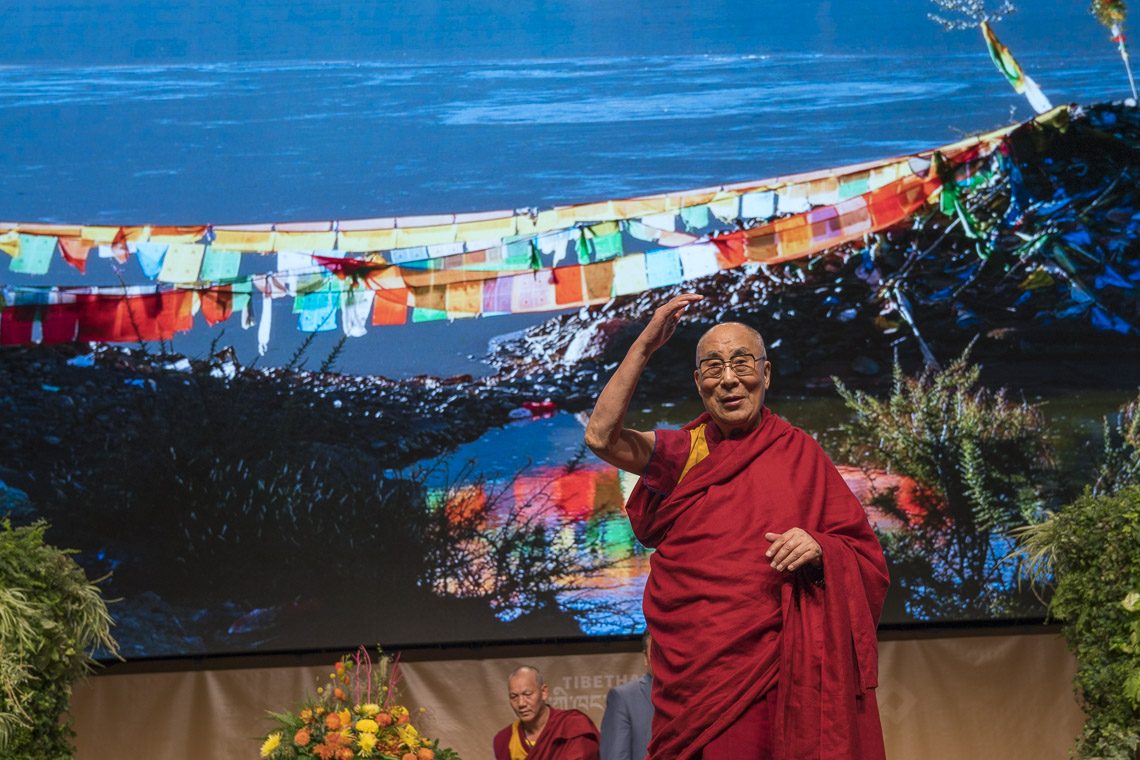 His Holiness the Dalai Lama waving to the audience of over 1600 students at the start of their dialogue at the Jahrhunderthalle in Frankfurt, Germany on 13 September, 2017. Photo by Tenzin Choejor

His Holiness also spoke to the public later in the afternoon on the topic, “Global Ethics – Shared Values” organised by Tibet house (Frankfurt) at the same venue.

“I consider myself as a citizen of the world”, His Holiness began.

“But why is there still violence when basic human nature is said to be compassionate. It is due to too much emphasis on the secondary level of differences including different religious faith. Now, in order to create a happier world, we need sense of oneness of 7 billion human beings irrespective of nationality, colour and religious faith. We must make efforts to promote a sense of oneness of humanity, through education.”

“Scientists say constant fear; constant anger is actually eating our immune system. When a person is coming from distance, you feel fear/irritation. It creates a barrier but if you consider the person as your brother or sister, that sort of thinking immediately removes that barrier between them and us.”

“Global economy with no national boundaries; climate due to global warming beyond national boundary or religious boundary; and increasing population that limits our natural resources, under these new realities, now the time comes to develop a sense of oneness of humanity.”

His Holiness mentioned that the European Union is the perfect example of oneness of humanity and that it should expand and spread the message of oneness.

“Take for instance, India and China. Neither of the two can destroy the other. So where we like it or not, you have to live side by side. So it’s much better to live harmony with mutual respect. Mutual respect eventually develops mutual trust. The Middle way approach too is based on this principle, living in harmony and mutual respect. Suspicion only gives way to distrust, distance, spending more money for weapons which is the real source of all the trouble.”

“Who created violence? Not God, but we. So we have the responsibility, to reduce and eventually to eliminate all these violent actions. We must not be indifferent to the suffering of other beings. I cannot ignore when someone is in pain, even if he or she isn’t a Buddhist. He or she is a human being, brother or sister, whom you must help as much as you can”.

“So now we really need the sense of oneness of humanity, irrespective of the nationality, religious faith and family background, be it rich or poor”.

With that he concluded his address to the public which was followed by a questions brought forward by a handful of people from the crowd.

His Holiness will participate in the morning session of a one-day conference on Western Science and Buddhist Perspectives to be held at Jahrhunderthalle, Frankfurt on 14 September 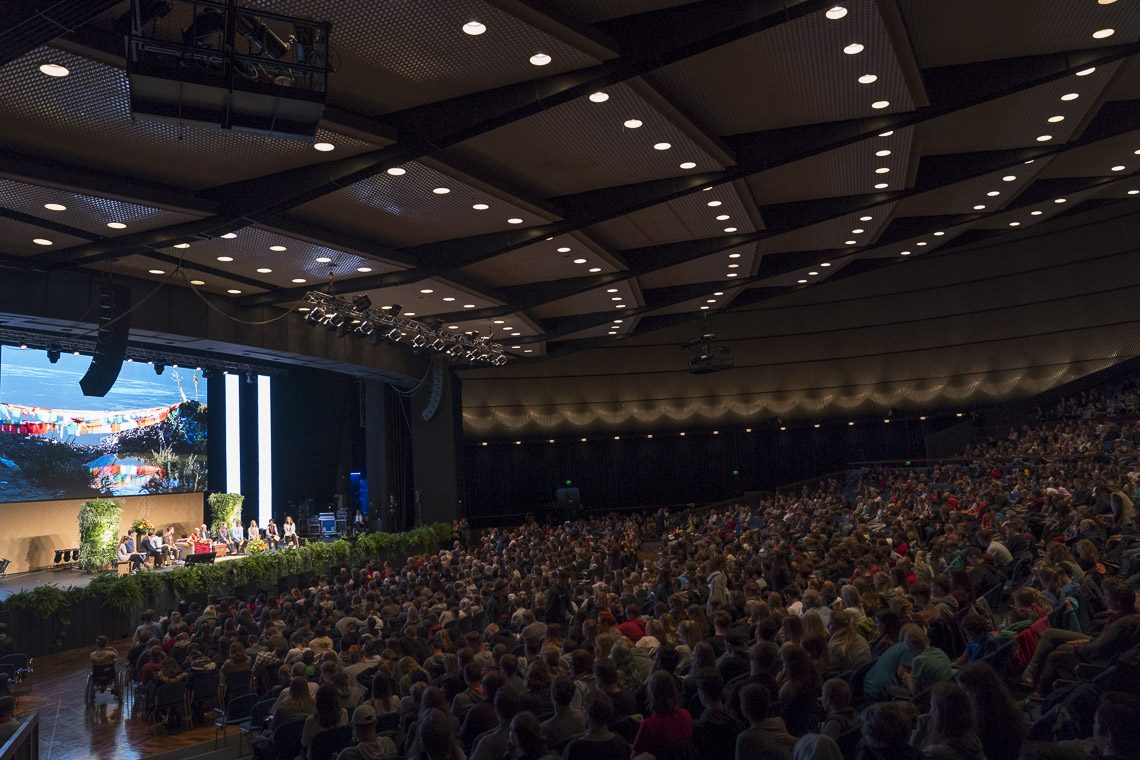 A view of the stage at the Jahrhunderthalle during His Holiness’ dialogue with over 1600 students in Frankfurt Germany, on 13 September, 2017. Photo by Tenzin Choejor