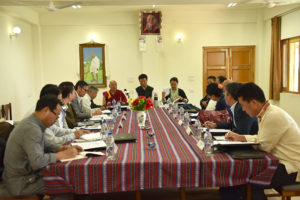 Convening the meeting, Chairman of Education Council Geshe Lhakdor emphasised the importance of implementing the principles of Tibetan Education policy at an experimental level thus paving way for a practical approach.

“A constant qualitative research must be done” recommended Geshe Lhakdor.

He further called for the principle of flexibility and adaptability in education one that is responsive to change and beneficial for the years to come.

Geshe Lhakdor also mentioned that the Education Council should prioritise the preservation of unique Tibetan culture, language, and religion besides promoting quality modern education. He recommended including teaching on a ‘sense of responsibility’ so that the child becomes self-sufficient and capable enough to handle all kinds of interferences.

“Even if the population of Tibetan students is declining we must improve the quality of education” asserted Geshe Lhakdor. 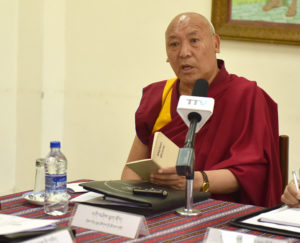 Education Kalon Dr. Pema Yangchen explained the principles of the Education Council and spoke about the various activities and curriculum implemented.

Kalon particularly stressed on the important role of the first-hand experience in teaching and learning process where students ‘build knowledge by doing’.

She asserted that Parents should be involved and engaged in their child’s education and further necessitated the parents to value and respect the education policy in order for the policy to flourish.
“It is important for both parents and teachers to build amicable relations,” said Dr. Pema Yangchen. 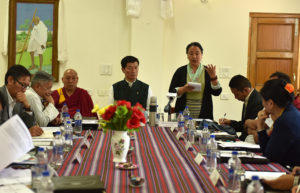 Clarifying the stereotype that is often associated with Tibetan Education Policy, Chief guest Dr. Lobsang Sangay, CTA President informed that it is the method of teaching rather than the language used that truly determines the essence of Education Policy.

He further suggested that from class 5 above in the Tibetan schools in exile, it is a must to incorporate the use of English as the medium in the study of Mathematics and Science since the language of both subjects is universal.

“Effort must be made to improve the quality content of the textbooks to meet the needs of today’s society meanwhile making learning interesting for the students” asserted President Sangay.

The inaugural event concluded on optimistic note. The two-day meeting will include reviewing the resolutions of the 6th meeting, discussion on the curriculum of primary and secondary schools, discussion on secular ethics in the school curriculum, and other discussions. 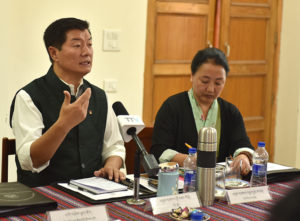 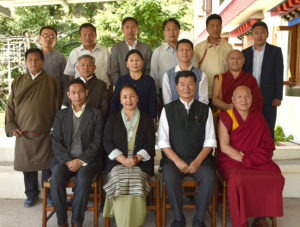