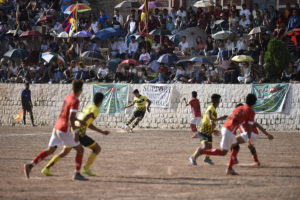 Dharamshala: Once again the ground of Upper TCV school was brimming with an overwhelming crowd gathered to watch the finale of this year season of Gyalyum Chenmo Memorial Gold Cup (GCMGC)

The season finale was played between DYSA Mundgod Vs Dhondupling FC (DFC) and DYSA Mundgod once gain claimed the 2019 GCMGC for the second successive year.

Present at this intense sporting event rendering support was the chief guest CTA President Dr. Lobsang Sangay who was accompanied by Health Kalon Choekyong Wangchuk and other dignitaries from Tibetan Parliament in exile. Mr. Devinder Singh Jaggi, Mayor of Dharamshala attended as the guest of honor.

In his keynote address, President Dr. Lobsang Sanagay reiterated that GCMGC is a prestigious tournament because of the effort and input that went into organising the tournament ever since its foundation in 1981.

President Sangay thus commended the contributors as well as organising members of Tibetan National Sports Association (TNSA) for their professionalism and efficiency in conducting the massive event systematically.  He further applauded the participant teams especially the ones from outside of India for their zeal and eagerness for the game.

“ It only represents the unity of Tibetans as one big family possessing one goal” affirmed President Dr. Lobsang Sangay. President then delivered words of encouragement to the players and bolstered their confidence.

Before the final match, a friendly match was played between the girls of Gopalpur TCV  school and Upper TCV and the winner was Gopalpur TCV school girls with the scoreline of 1-0.

The final match between DYSA Mundgod and DFC was certainly one of the most gripping matches of the entire season as both the teams displayed the same level of energy and vigor playing intensely for more than 90 minutes in front of a frenzied crowd scoring equal goal of 1-1. The teams were then given 15 mins overtimes to break the tie and DYSA Mundgod claimed the trophy by scoring a total of 5 goals against 3 goals by DFC.

The cheers of the fans filled the ground while many chanted words of encouragement to the losing team.

President Dr. Lobsang Sangay presented a portrait of Gyalyum Chenmo as a token of appreciation to all the TNSA International chapter members including TNSA executive members. Special souvenirs were also awarded to the seasons’ top scorer, best goalkeeper, the best player, and fair play team. The referee who took fair decisions throughout the season’s match was also felicitated by President Sangay.

Finally, the runners up award were presented to Dhondupling DFC while DYSA Mundgod takes the winning trophy to home.

The silver jubilee of GCMGC was hosted by the TCV school upper, Dharamshala and organised by TNSA. Convened in 1981, the tournament is held every year to honor the memory of the late mother of His Holiness the Dalai Lama, Gyalyum Chenmo Dicky Tsering. This popular sporting event is an inalienable part of Tibetan Diaspora. 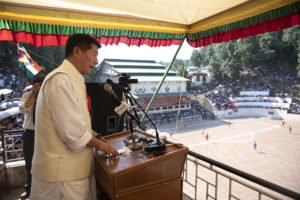 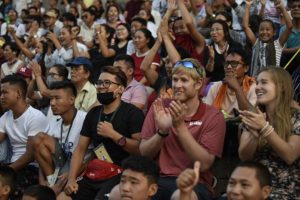 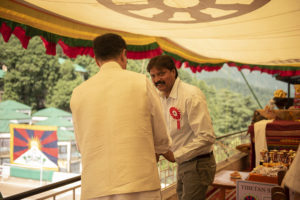 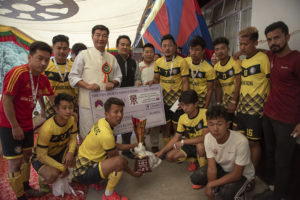 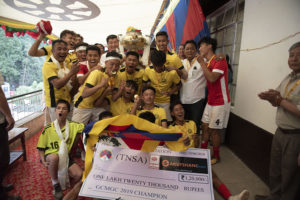 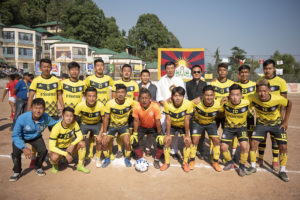 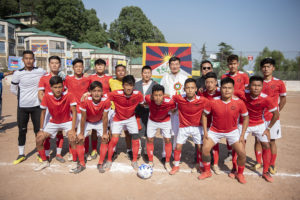 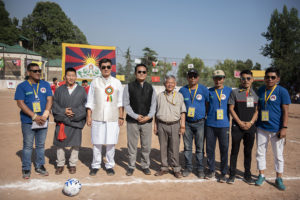