New Delhi: On Wednesday this week, while addressing the Indian students at Hansraj College, the President of Central Tibetan Administration Dr Lobsang Sangay pointed to the ongoing incursion at Dokhlam as a symptom of China’s expansionist foreign policy and fully supported the position of the Indian government in the current standoff.

Dr Sangay decried China’s nationalistic design wihich is increasingly becoming apparent; with the South China Sea, East China Sea, Scarborough Island and, increasing border incursions across the MacMahon line and now at Dokhlam. He said the Dokhlam situation is consistent with a troubling pattern of Chinese policy of trying to alter the basic facts on the ground.

“You are going to face a complex world. The current global trend is witnessing ultra-nationalism and extremism on the rise and internationalism and liberalism on the decline,” affirmed Dr. Sangay.

Dr Sangay on Wednesday was conferred with the prestigious “Mahatma Hansraj Gaurav Samman’ by his alma mater Hanrsaj College, University of Delhi. The theme of the honor underpinned his contribution to the Tibetan freedom struggle and in recognition of his accomplishments as an illustrious alumnus of Hansraj College.

Speaking to Republic TV on the sidelines of the Hansraj event on the current Doklham standoff, Dr Sangay recalled the ‘five-finger’ analogy strategized by Mao Zedong.

“In early 1950’s the then Chairman of People’s Republic of China termed Tibet as China’s right hand palm whereas Ladakh, Nepal, Sikkim, Bhutan and Arunachal Pradesh are its five fingers. Therefore, China’s flexing of its military muscle is a manifestation of its decades old strategy to encircle and weaken India,” said Dr Sangay.

Dr Sangay further cautioned India to stay alert on this matter. “I always tell India and the world to take heed of the Tibet narrative. We have been telling India for the last 50 years that what happened to us (Tibet) could happen to you.”

“One has to understand Tibet to understand China. What is happening in Dokhlam now, happened to Tibet in 1959 (referring to the illegal Chinese occupation of Tibet),” affirmed Dr Sangay.

The standoff between the Chinese and Indian armies of the two countries began in mid June this year and has been officially one of the longest between both countries since the 1962 war. According to the Indian media, the Indian defense establishment is opposed to China’s attempts to construct a road on the Doklam plateau on the Sikkim-Bhutan-Tibet tri-junction.

The Dokhlam plateau is Bhutanese territory but China, which calls it Donglang, regularly sends People’s Liberation Army patrols to the area to lay claims over it. At the request of Bhutan, India came to Bhutan’s defence. 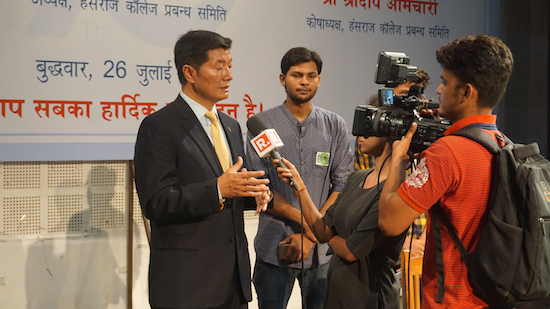