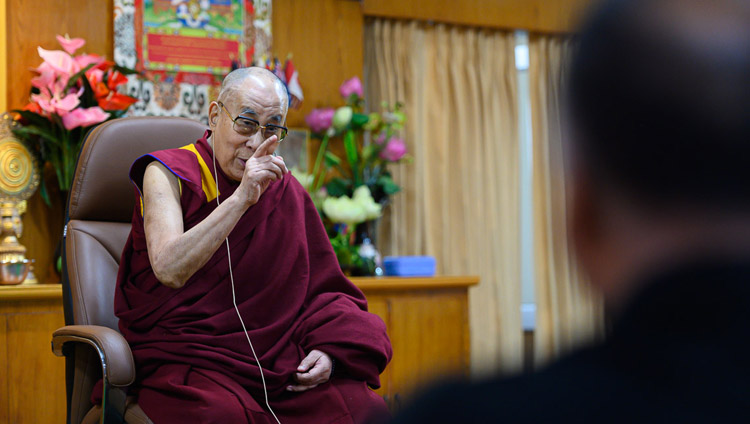 His Holiness the Dalai Lama addressing members of the Youth Buddhist Society of India, Sankisa and students and faculty from the Indian Institute of Mass Communication at his residence in Dharamsala, HP, India on November 15, 2019. Photo by Tenzin Choejor/OHHDL

Dharamshala: His Holiness the Dalai Lama met with delegates of the Youth Buddhist Society of India, Sankisa and a delegation of students and faculty from the Indian Institute of Mass Communication, Delhi. The Sankisa delegation includes students, teachers, doctors and engineers from 13 states among others.

His Holiness began his talk to them by declaring that his primary commitment is to promote the practice of altruism, the awakening mind of bodhichitta.

“We are encouraged to view all sentient beings as being as dear as our own mother. There are beings in other galaxies with whom we have no direct contact. Here in this world, there are animals, birds, insects, worms and so forth, who it is difficult to help because they have no language. However, we can do something for our fellow human beings, because we can communicate with people who are mentally, physically and emotionally the same as us. Training in compassion brings people peace of mind—it brings happiness.

“When we’re too frustrated, angry or full of fear, we have no peace of mind. Money, fame and power don’t bring peace of mind, but paying attention to compassion does. Young children don’t care about their companions’ faith, nationality or race, so long as they smile and play cheerfully together. That’s the spirit we all need.

“Unfortunately, modern education gives little instruction on how to tackle our disturbing emotions and achieve inner peace. On the other hand, for more than 3000 years the concepts of ‘ahimsa’—restraining from harming others, and ‘karuna’—cultivating a compassionate motivation, have flourished here in India. These practices existed before the Buddha.

“Originally Tibetans were nomads and warriors, but after we encountered Buddhism, we became more peaceful. In the 7th century the Tibetan king decided to model a form of Tibetan writing on the Indian example. Then in the 8th century, another king, despite his close relations with China, chose to introduce Buddhism to Tibet from India.

“He invited a great scholar, a monk who was a philosopher and logician called Shantarakshita from Nalanda University. Shantarakshita recommended that Indian Buddhist literature should be translated into Tibetan, with the result that we have a collection of 300 volumes of scripture. 100 volumes contain records of the Buddha’s words, the remaining 200 or more consist of commentaries by subsequent Indian masters. In the process of translation, the Tibetan language was deeply enriched. Now it is the most accurate medium for explaining Buddhist thought.

“Followers of the Pali Tradition rely on the authority of the Buddha’s words. Followers of the Nalanda Tradition, like us Tibetans, rely on reasoning and logic. We ask “Why? Why did the Buddha teach that? What did he mean?” The Chinese tradition had little interest in logic and analysis. Many Chinese practitioners advocated concentration and non-conceptual meditation. Shantarakshita anticipated tension between that point of view and his logical and analytical approach.

“He advised the Tibetan king to invite his foremost student, Kamalashila to Tibet to debate with the Chinese monks. After defeating the Chinese point of view, Kamalashila emphasized study and analytical meditation. This approach has given us the confidence to engage in fruitful discussions with modern scientists about such topics as cosmology, neurobiology, physics and psychology.”

His Holiness clarified that he is committed to promoting basic human values, to encouraging inter-religious harmony, and to preserving Tibetan knowledge and culture. He quoted a 15th century Tibetan master who declared that until the light of India reached Tibet, despite its being the Land of Snows, it had remained dark. His Holiness added that Tibet’s preservation of the Nalanda Tradition is a real source of pride.

He observed that in past India produced many great scholars and thinkers who developed a rich understanding of the workings of the mind and emotions—knowledge of crucial benefit to many in the world today. Since he believes that India has both the opportunity and ability to combine this ancient knowledge with modern education, he is committed to trying to revive appreciation of it.

In answering the audience’s questions, His Holiness made clear the contribution that ‘ahimsa’ and ‘karuna’ make to fostering religious harmony. Where there is a basic intent to do no harm, there may be argument, but no violence.

He advised that being too self-centred can give rise to anxiety and depression. An effective antidote is to cultivate a sense of altruism, taking the whole of humanity into account. Appreciating the oneness of humanity leads us to recognise our essential equality as human beings. He pointed out that the Buddha opposed caste divisions.

“Today, with the help of technology, the whole of humanity is one community.”

Asked how to better share Tibetan culture with the rest of the world, His Holiness commented that prior to 1959 there were those who referred to Tibetan Buddhism as Lamaism, as if it were not an authentic tradition. Nowadays, it is properly respected as the heir to the Nalanda Tradition, a system that even attracts the interest of modern scientists.

Questioned about his next reincarnation His Holiness recalled that when, on a previous occasion, a journalist had asked about this, he took off his glasses, looked him in the eye and asked, “Do you think there’s any hurry?” He remarked that certain Chinese hardliners seem very keen to know the answer to this, but they will have to wait another 30 or 40 years to find out.

“The future of the Dalai Lama is really in my hands. Before I die, I’ll write a will. And I think I’ll probably come back in some Buddhist community. However, as far back as 1969, I made it clear that whether or not there will be a 15th Dalai Lama will be up to the Tibetan people. It’s not so important. There is no reincarnation of the Buddha, but his teaching survives. There are no reincarnations of the Nalanda masters, but their writings remain. In my case, books and recordings of my talks will be there. 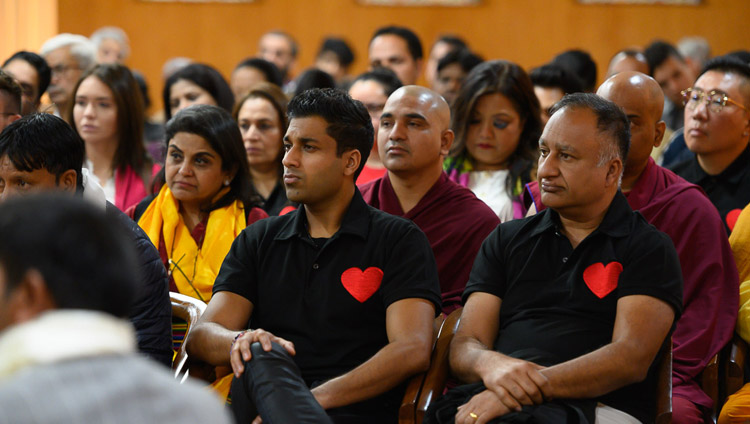 Members of the audience listening to His Holiness the Dalai Lama speaking during his meeting with Indian Buddhists and students of mass communication at his residence in Dharamsala, HP, India on November 15, 2019. Photo by Tenzin Choejor/OHHDL 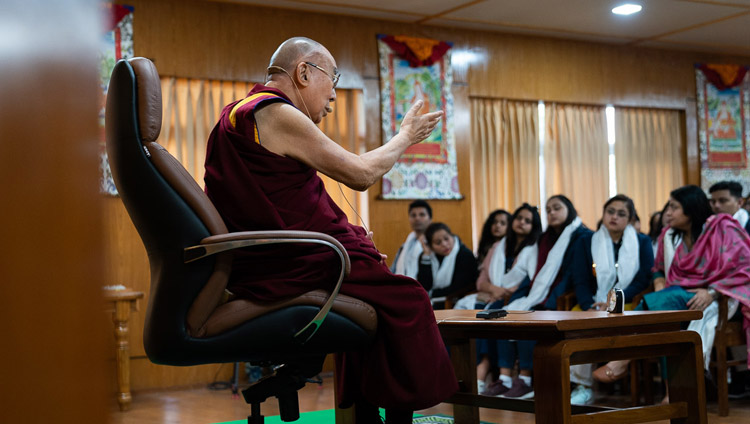 His Holiness the Dalai Lama speaking to Indian Buddhists and students of mass communication at his residence in Dharamsala, HP, India on November 15, 2019. Photo by Tenzin Choejor/OHHDL 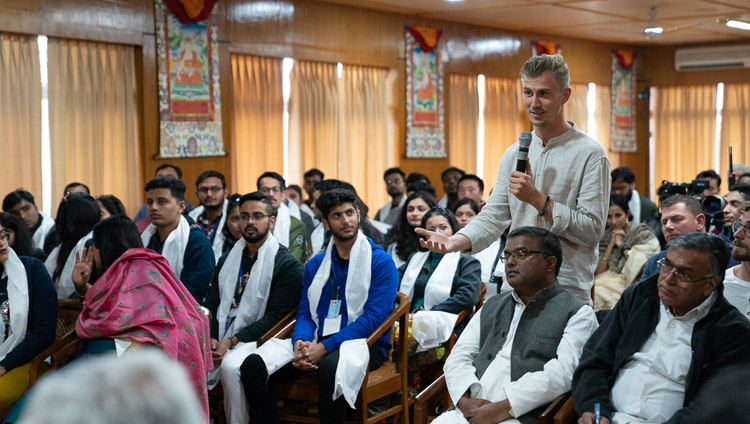 A member of the audience asking His Holiness the Dalai Lama a question during his meeting with Indian Buddhists and students of mass communication at his residence in Dharamsala, HP, India on November 15, 2019. Photo by Tenzin Choejor/OHHDL