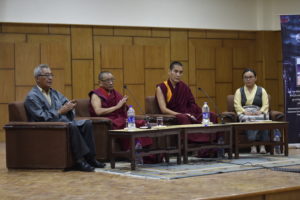 He also emphasised on the reincarnation system of both the Dalai Lama and Panchen Lama.

Tsering Tsomo, Director of TCHRD dwelled upon critical issues on Panchen Lama such as enforced disappearance, violation of Human right, Crime against humanity, abduction and mentioned that the abduction is planned from a long period of time as they know the importance of Panchen Lama in our community and that is how it becomes a hindrance and suffering for many Tibetans.

She concluded with a brief talk on CCP’s policy on Religion.

Officiating President Kalon Ven. Karma Gelek Yuthok, spoke on CTA’s stand on the Panchen Lama’s case and expressed his hope on coming back of the 11th Panchen Lama somehow.

Thubten Samphel, former Director of Tibet Policy Institute, CTA talked on his personal impression of the late 10th Panchen Lama on meeting him in the year 1985. He further elaborated the impression on the late Panchen Lama through two lens. One before he read the book ” Panchen lama’s Seventy thousand character petition of 1962″ and one after he read the mentioned book.

On 17 May 1995, the Chinese government abducted a six-year-old boy, Gedhun Choekyi Nyima, just days after he was declared as the 11th Panchen Lama, one of the most senior figures in Tibetan Buddhism. Despite repeated calls for China to account for the safety and whereabouts of Gedhun and his family, China reported in the 1990s only that he was “under the protection of the government”. No information has been provided about him since. 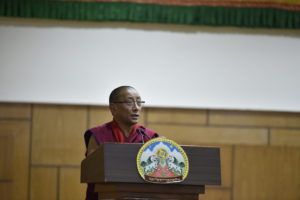 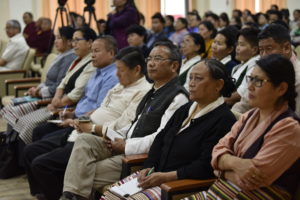 Secretaries and dignitaries of various departments and offices at the panel discussion today. Photo/Jayang Tsering/CTA 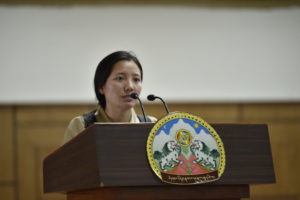