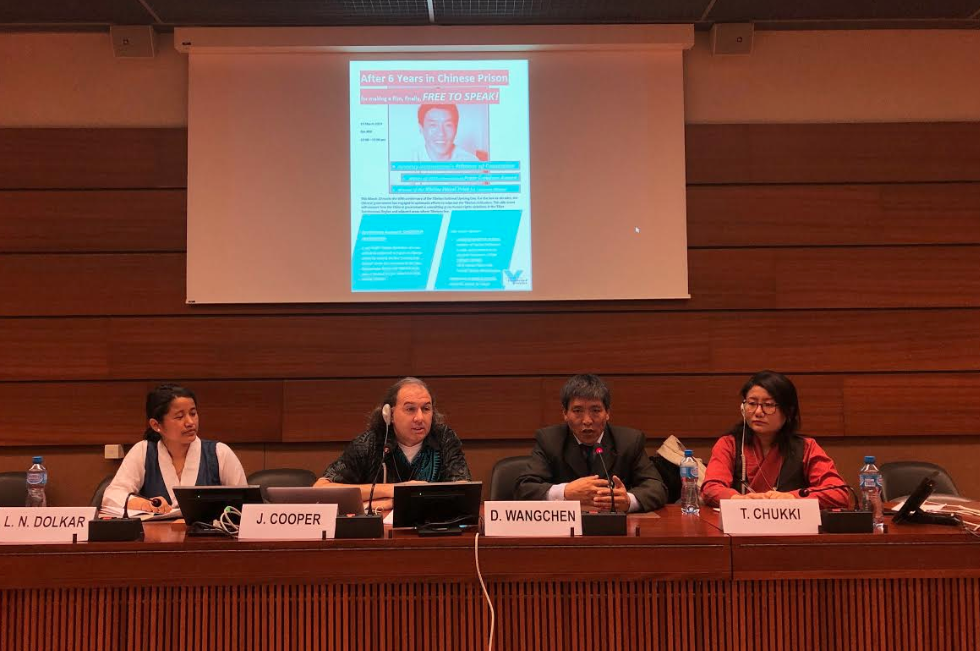 From left: Lhagyari Namgyal Dolkar, Joshua Cooper, Dhondup Wangchen and Thinlay Chukki at a side event at the 40th session of the UN Human Rights Council in Geneva, 13 March 2019.

Geneva: At the ongoing 40th session of the UN Human Rights Council, Dhondup Wangchen and a Tibetan delegation led a side event to uncover China’s 60 years of gross human rights violation in Tibet.

In front of a packed room with representatives from various Permanent Missions, non-governmental organizations and other offices, the former political prisoner said, “It has been long since China occupied Tibet, but Tibetans inside Tibet continue their peaceful resistance even to this day.”

Dhondup was sentenced to a six-year arbitrary sentence by the Chinese courts after he made a documentary about the real situation inside Tibet just before the 2008 Beijing Olympics.

“We wanted to bring out the realities of the situation in Tibet to the international community. We wanted the world to see what Tibetans think about their own conditions within Tibet,” he said.

The documentary entitled “Leaving Fear Behind” featured testimonies of more than 100 Tibetans from all walks of life who spoke about their oppressive conditions under China’s illegal rule.

While freedom of expression is considered a basic human right, the Chinese government sent Wangchen to prison for exercising this right where he was subjected to torture, intensive forced labour, systemic discrimination and denied any family visits.

The side event also featured Thinlay Chukki from the Central Tibetan Administration’s UN and Human Rights Desk who talked about the lack of religious freedom in Tibet.

Chukki noted that in its adoption of recommendations by the Member States under the third cycle of Universal Periodic Review (UPR), China has claimed that it has “accepted and already implemented” most of the recommendations on freedom of religion.

“Unless Xi Jinping and the Chinese Communist Party are planning on starting a new religion, ordering the Tibetans to install pictures of Xi Jinping in their altars to be worshipped by them does not amount to freedom of religion.”

She expressed serious concerns that it has been almost 25 years since the Special Rapporteur on freedom of religion and belief’s last visit to Tibet.

“The UN Human Rights Council should not allow China to vitiate the UPR process by stating such blatant lies about the conditions in Tibet and ensure that there is freedom of religion and belief in its true sense, not with Chinese characteristics,” said Chukki. 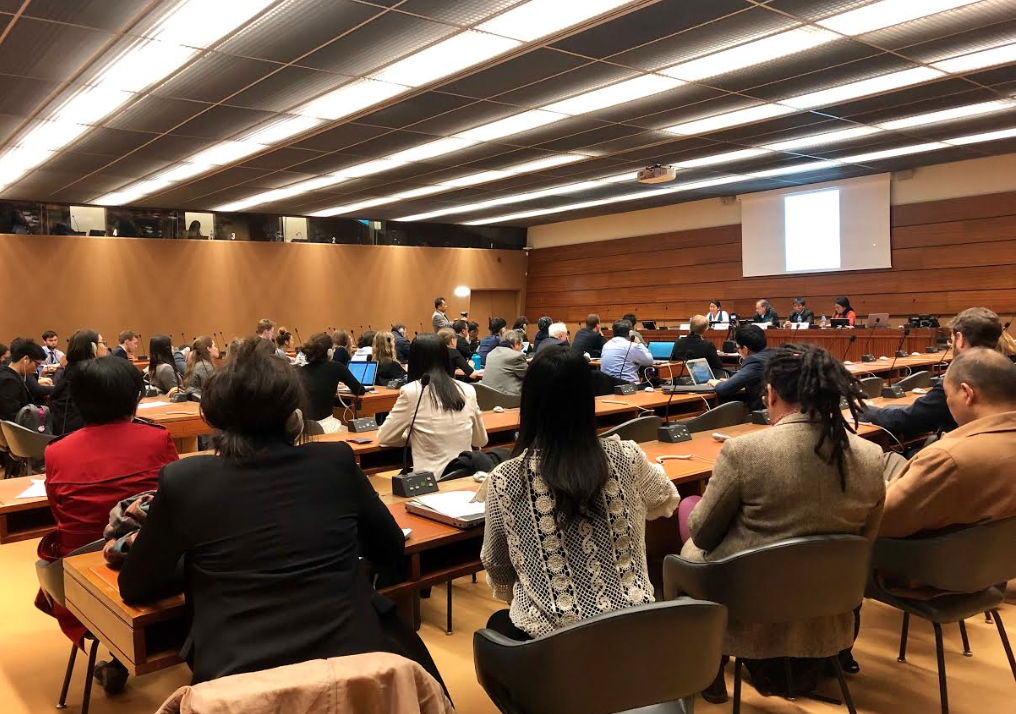 A side event on the 60 years of China’s systematic human rights violations in Tibet held at the 40th session of the UN Human Rights Council in Geneva, 13 March 2019.

Lhagyari Namgyal Dolkar, President of the Gu-Chu-Sum Movement of Tibet, slammed China for blatantly denying the existence of political prisoners under its repressive rule.

“It’s an honor for me to speak along with a Tibetan former political prisoner like Dhondup Wangchen and on behalf of Tibetans inside Tibet at the UN,” she said.

When Lhagyari noted China’s illegal occupation of Tibet, she was abruptly interrupted by a Chinese delegate in the room who demanded that she maintain the “UN language code”.

“I’ll remember this paradoxical experience of being interrupted to maintain the ‘UN language code’ by the Chinese representative when it’s the Chinese government who is actually failing to respect and uphold the UN Charter and fundamental human rights principles.”

In his conclusion, Wangchen appealed for the continued support by the international community.

“The Chinese authorities knew that I was receiving international support and attention and therefore, the extent of torture I was subjected to was much lesser compared to some of my other co-prisoners. Your support and attention inspire Tibetans inside Tibet to continue their struggle for justice,” he said.

When the side event went beyond the scheduled time period, a Chinese delegate tried to get the security officials to stop the event.

However, he was escorted outside of the room and the discussion on Tibet was allowed to continue for an additional 20 minutes.