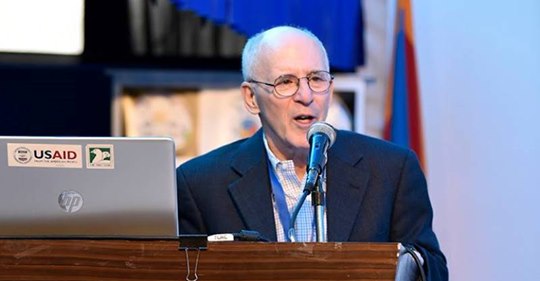 Richard Weingarten, a long-time friend of the Tibet.

Dharamshala: Deputy Speaker Ven. Acharya Yeshi Phuntsok of the 16th Tibetan Parliament-in-Exile offered his heartfelt condolences to Carol Weingarten over the demise of her husband late Richard Weingarten, a long-time friend of the Tibet, who passed away on 15 October 2019.

In the condolence letter, Deputy Speaker wrote “Richard Weingarten was a long-time friend of Tibet, who visited Dharamshala and toured some Tibetan settlements of South India in 1980s. He submitted a brief report on sustainable development to the Kashag on the basis of his observation, which helped in establishing the Planning Council in Dharamshala. He also contributed to the Integrated Development Plan from 1992-1997 and assisted in establishing the Tibet Fund.”

“He was a spiritual person and a practicing meditator with profound knowledge of Tibetan Buddhism,” he wrote.

He also wrote “His loss is not only an irreparable loss for your family but also for Tibet cause. We are with you in this hour of grief and pray for the departed soul.”

Richard Weingarten had a long and distinguished career in law, venture capital, investment banking, and an independent financial advisor to a wide variety of firms around the world. He was also the founding Managing Director of the Norwegian Microfinance Initiative (NMI).