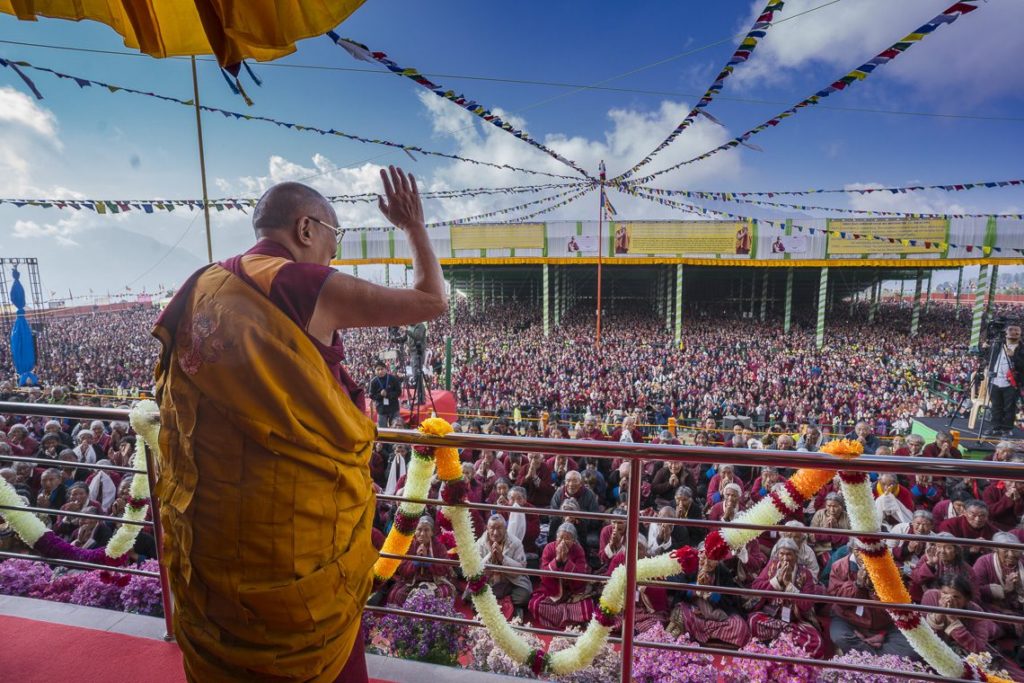 His Holiness the Dalai Lama waving to the crowd of over 50,000 devotees on his arrival at Yiga Choezin teaching ground at Tawang, Arunachal Pradesh on 9 April 2017. Photo by Tenzin Choejor/OHHDL

The month of April began with His Holiness the Dalai Lama’s visit to Arunachal Pradesh from 2 – 12 April 2017. While this was not His Holiness’ first visit to the state, it caught the media frenzy primarily because of China’s overreaction and angry protests stemming from a misplaced notion of fear and suspicion.

Arunachal Pradesh – particularly the region of Tawang inhabited by the Mon tribe who are predominantly Buddhists revere the Dalai Lamas as their spiritual root teacher. This devotion was in evidence during His Holiness the Dalai Lama’s visit when ten thousands of local people gathered, with smiles on their face and white scarves and incense in their hands, to welcome His Holiness to the state.

In fact, people came in droves not only from local areas but also traversed mountains from far-flung areas such as Bhutan and the entire Himalayan sub-region.

The fact that this vast extant of the spiritual power of His Holiness the Dalai Lama was on full display during the religious visit could factor in in provoking China’s vitriolic reaction. Other than that, it is difficult to understand why Beijing was so worked up over a spiritual visit by a spiritually revered leader.

Although China’s scathing remarks on anything related to His Holiness is nothing new, this time however, the reaction was notably more incendiary than in the past.

Taking due cognizance of the acrimonious Chinese response, the Indian government explicitly stated that the visit was purely religious and spiritual in nature.

Notwithstanding the reasoning by Indian Government, the Chinese government, far from being mollified, went on to publish a provocative editorial on Global Times, a state sponsored English daily, warning India of a ‘geopolitical onslaught from an economically and militarily stronger China’ for allowing the visit.

A more ominous reason for China’s vitriol could also be the growing prominence of the issue of the 15th Dalai Lama. Tawang is not only a place with strong spiritual connection with Tibet but is also the birthplace of the sixth Dalai Lama, Tsangyang Gyatso. Therefore, the probability of Tawang emerging as an important factor in the Dalai Lama’s succession plan could wreak havoc in China’s grand plan of ruling Tibet by reincarnation.

An internal assessment made by the Chinese Communist Party pointed that China cannot rule Tibet and the Tibetan people forever, if devoid of the Dalai Lama’s leverage. Therefore, the issue of the 15th Dalai Lama has gained even more importance to address China’s legitimacy over Tibet or the lack thereof.

Probably sensing this future manipulation of the succession issue by China to serve its vested interests, His Holiness the Dalai Lama announced during the visit that the ‘the Tibetan people would decide whether or not to continue with the institution of the Dalai Lama.’

Amid all the clamor over His Holiness the Dalai Lama’s Arunachal Pradesh visit, however one thing is clear: the Chinese government has without their slightest intention brought the Tibet issue into the global spotlight and to a whole new generation of Indians.

The unavoidable irony is that His Holiness the Dalai Lama, one of the leading luminaries of non violence and compassion, could carry out his spiritual activities in complete freedom just a few miles across the Chinese controlled Tibetan borders, stands in stark contrast with the situation inside Chinese occupied Tibet. This irony was not lost on people of Arunachal Pradesh and India, who steadfastly rejected the Chinese infringement over their territorial sovereignty

At the recent conferment of M L Sondhi Prize for International Politics to His Holiness the Dalai Lama, while fielding media queries on China lambasting India over his Arunachal Pradesh visit, His Holiness termed the reaction from the Chinese side as really “unusual” and “strange” and let humor get the better of him and said “while I was in Tawang, no Chinese intrusion took place; otherwise this would prompt me to flee from Tawang.”

Therefore the magnanimity of the exalted personality such as His Holiness the Dalai Lama serves as an antidote to the timorous behavior of a supposedly superpower, military giant such as China. It’s time China takes a cue from His Holiness’ towering benevolence and finds a cure to their cowering comportment.