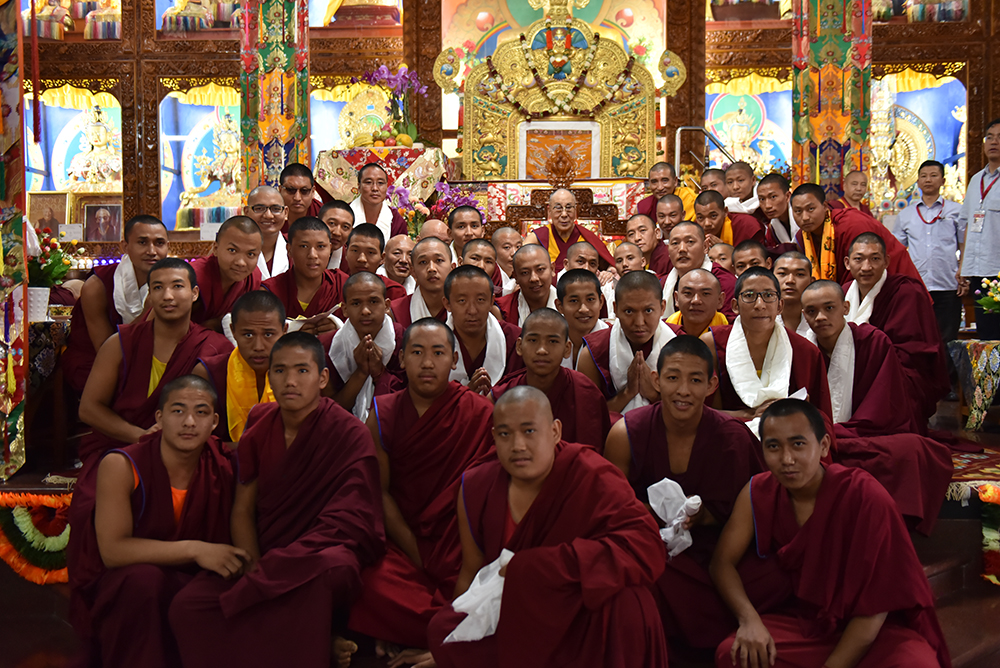 His Holiness the Dalai Lama with the participants of the Buddhist Philosophy debate in Gaden Shartse, Mundgod on December 19, 2019. Photo/ Tenzin Jigme/ CTA

Mundgod: Before going down to the Assembly Hall this morning, His Holiness the Dalai Lama talked to a group of patrons and supporters of the international conference that begins tomorrow—‘Jé Tsongkhapa, Life and Legacy’. He extolled the great value and continuing relevance today of the time-worn Indian traditions of non-violence and compassion. He also voiced his admiration for the common Indian meditative practices for developing a calmly abiding mind and insight into reality. From these emerged a map of the mind and techniques for tackling destructive emotions like anger and fear, as well as guidelines for cultivating positive emotions such as love and compassion.

“Reason and analysis can help us understand the benefits of compassion,” he told them. “We learn that it yields peace of mind, which leads to inner strength, in the context of which fear and suspicion are reduced. If you think about it, you may see that destructive emotions are closely related to self-centredness.

“These findings apply to us all. We all want happiness and, as human beings, we all have the same kind of brain, the same emotions, and the same potential. Scientists observe that we are social animals, because of which it is basic human nature to be compassionate. The future for each of us depends on others. That’s why, wherever I go and whoever I meet, I feel we are all essentially the same.”

Downstairs, in the Ganden Shartsé Assembly Hall, His Holiness observed students, many of them from the Mön region of Arunachal Pradesh, debate. The first group took as their starting point an assertion in Bhavaviveka’s ‘Blaze of Reasoning’ that ‘according to our system, we designate consciousness as self because that is what is reborn from life to life’. Another group referred to Chapter 15 of Nagarjuna’s ‘Fundamental Wisdom of the Middle Way’, which is called Examination of Essence. The challenger wanted to know what the word essence means here. He was told it refers to the object to be negated. 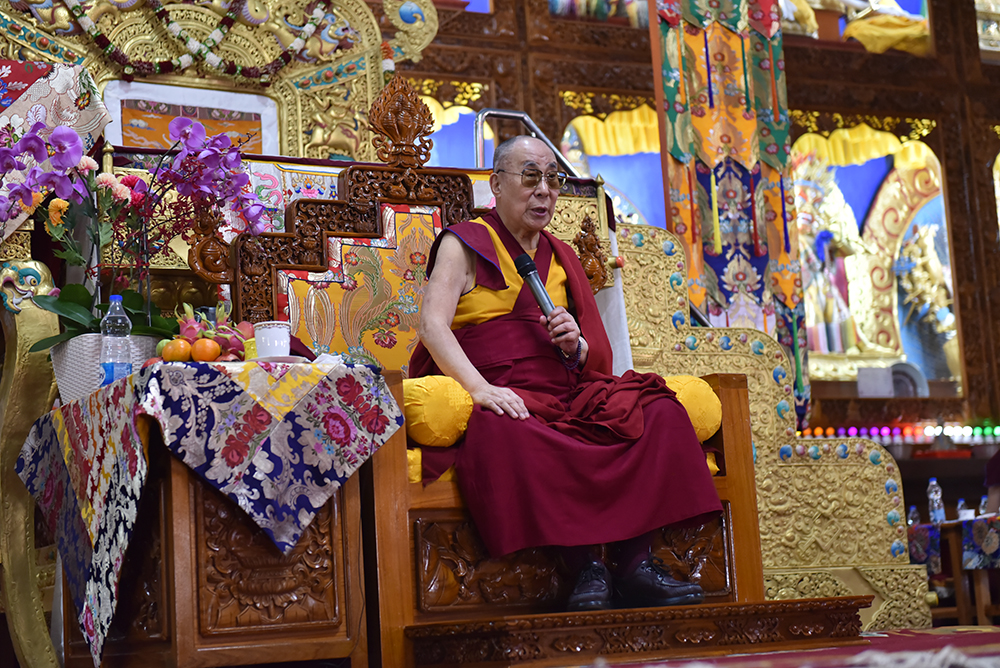 His Holiness the Dalai Lama presides over the ceremony at Gaden Shartse. Photo/ Tenzin Jigme/ CTA

Students from the Perfection of Wisdom class, quoting Chapter 5 of the ‘Ornament of Sutras’ discussed what is meant by bodhisattvas pursuing the mind of enlightenment with wisdom. Others examined Buddha nature. Yet another group argued about the practice of exchanging self and others, raising the point that to hold others dearer than yourself, you first have to reflect on their kindness.

Students of logic took quotations from Shantarakshita’s ‘Compendium of Reality’ (Tattvasamgraha) and Dignaga’s ‘Compendium of Valid Cognition’ (Pramana-samuchhaya) as their starting points. On several occasions, wily arguments raised smiles in the audience.

Whereas the earlier debates involved a single challenger being answered by several respondents, the presentation ended with students from the preliminary classes studying ‘Science of Mind’ and ‘Collected Topics’ employing groups of challengers and respondents.

The concluding auspicious verse made the plea that the merit generated in these debates be dedicated to the preservation of the teachings of the Buddha and Jé Tsongkhapa’s doctrine, as well as to His Holiness’s long life. 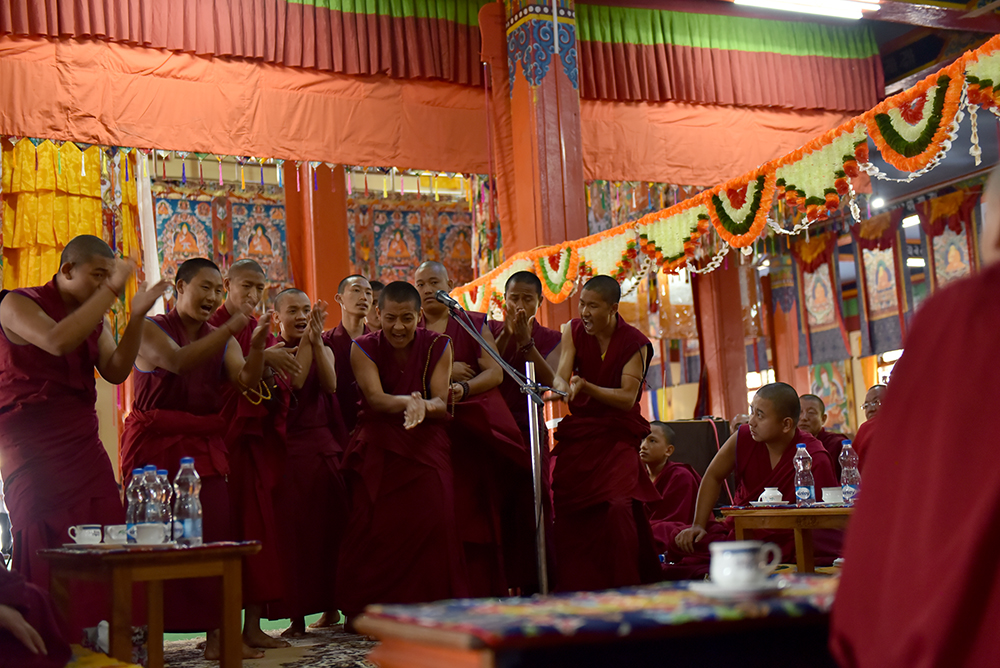 “This kind of debate only takes place among Tibetans,” His Holiness reflected. “For the last several centuries teachers have taught students this approach, generation after generation, and found it a helpful way to investigate the nature of reality. It’s not a technique limited to discussing certain topics, but can be applied to many other fields of enquiry. You, here, have done your best and I’d like to thank the teachers and abbots who have trained you.

“The nearby nunnery of Jangchub Chöling has produced several Geshé-mas. I’ve visited it before, but it might be difficult to do so again this time. When Shantarakshita first established the Vinaya in Tibet, he was unable to bring any Bhikshunis with him, consequently we don’t have a lineage of Gelongmas. However, there is no difference in men and women’s ability to study.

“These days the study of logic and the practice of debate is being pursued in schools, where the relevant teacher is now referred to not as a religious teacher but as a teacher of philosophy. I look forward to everyone, monks, nuns, lay-people young and old, being able to use reason and debate. The Three Seats of Learning have preserved this tradition so far, please keep it up.

“I remember I was on the top floor of Drepung Lachi when I announced that nuns should be encouraged to study and become Geshé-mas. Gyen Lobsang Nyima asked, ‘How could that be?’ I told him that since the Buddha had granted the Bhikshuni vow as well as the Bhikshu vow, it made sense that nuns too should study up to the level of Geshés.
“Nagarjuna wrote: ‘Desire, hatred and confusion arise completely from conceptualization.’ We misconceive things as existing the way they appear. Today, quantum physics says that nothing exists objectively as it appears. Destructive emotions arise because of our exaggerated outlook. But when we investigate without bias, we find that things do not exist the way they appear.” 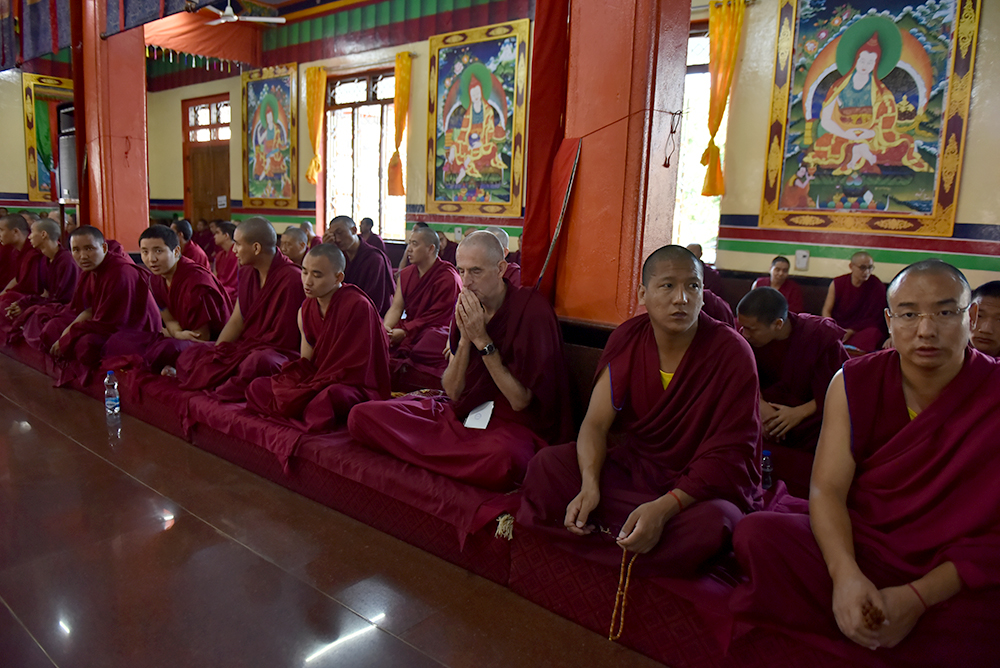 Monks in the audience listening to His Holiness the Dalai Lama. Photo/ Tenzin Jigme/ CTA

His Holiness noted that some of the debates had dealt with the awakening mind of bodhichitta. He quoted verses in its praise by Shantideva.

If I do not actually exchange my happiness
For the sufferings of others,
I shall not attain the state of Buddhahood
And even in cyclic existence shall have no joy.

The Offering to the Spiritual Master (Lama Chöpa) also backs this up:

This chronic disease of self-centredness
Is the cause of unwanted suffering.
Perceiving this, may I be inspired to blame, begrudge
And destroy this monstrous demon of selfishness.

Caring for my mothers and seeking to secure them in bliss
Is the gateway to infinite virtue.
Seeing this, may I be inspired to hold them dearer than my life,
Even should they rise up as my enemies.

The kernel of all these verses is that acting out of concern for others is a primary source of happiness and well-being. His Holiness concluded by encouraging the monks to remember that it will only be through study and practice that the life of the Buddha’s teachings will be prolonged. 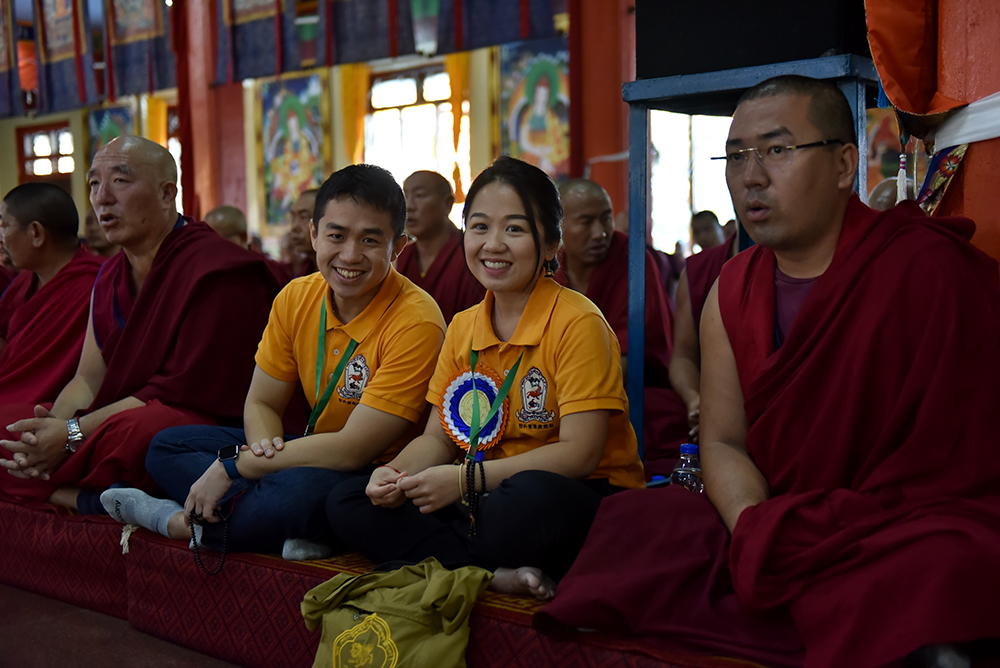 Followers of His Holiness the Dalai Lama amidst Tibetan monks at the ceremony. Photo/ Tenzin Jigme/ CTA