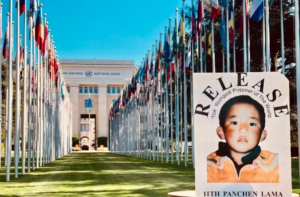 The only known portrait of the 11th Panchen Lama of Tibet, one of the leading Tibetan Buddhist figures, sits in front of the United Nations building in Geneva, Switzerland. Photo/Kunchok Yaklha

GENEVA: Twenty-four years ago, on this very day, a six-year-old boy named Gedhun Choekyi Nyima and his family members were abducted by Chinese authorities after the boy was recognized as the 11th Panchen Lama of Tibet, one of the leading Tibetan Buddhist figures.

“To this day, we have no verifiable information about the whereabouts of the Panchen Lama and his family,” Kalden Tsomo said to the UN Working Group on Enforced or Involuntary Disappearances’ (WGEID) meeting with civil society members on Tuesday at its ongoing 118th session in Geneva.

Kunchok Yaklha added, “The continued enforced disappearance of the Panchen Lama is a flagrant violation of the respect for the rule of law, human rights and fundamental freedoms as enshrined in the Declaration on the Protection of All Persons from Enforced Disappearance.”

“Six million Tibetans have the right to know the truth of the fate and whereabouts of the 11th Panchen Lama,” said Yaklha.

Under international law, the right to the truth is an absolute right without any limitation—a right acknowledged by the WGEID’s very first report in 1981.

The oral and written submissions to the WGEID emphasized that the disappearance case of the Panchen Lama is unlike any other because it is not simply about an individual person is missing.

The 11th Panchen Lama’s importance is underscored by the historical role the 10th Panchen Lama in highlighting and documenting China’s gross and systematic human rights violations against Tibetans in his 70,000-character petition to top Chinese leaders, including Chairman Mao Zedong, in 1962.

After years of disappearance, solitary confinement and public humiliation at the hands of Chinese authorities, the 10th Panchen Lama suffered a mysterious death at his monastery in Tibet.

Today, the Chinese government has installed its own choice of Panchen Lama, a son of two Communist Party members, to serve as a mouthpiece for Chinese propaganda and in order to sinicize and politicize Tibetan Buddhism. Therefore, the United Nations must ensure that the Panchen Lama’s case “does not become one of the many cases just filed away,” said Yaklha.

The Panchen Lama’s missing case was first filed with the WGEID by the Tibet Bureau Geneva back in 1995.

“Cases don’t just disappear, they have no expiry date,” the WGEID responded, noting that continued communication with states is useful and how its reports and references can be used to put pressure on the states.
It further explained that certain countries accuse the Working Group of being “biased” and “politically motivated” and use vague domestic criminal law provisions to justify government actions.

That enforced disappearance causes “anguish and sorrow” is noted in the 5th preambular paragraph of the Declaration on the Protection of All Persons from Enforced Disappearance.

Indeed, for the last 24 years, Tibetans inside and outside Tibet have shown a growing resentment against Chinese authorities for abducting one of Tibet’s most precious little boys.

Further, the disappearance of the Panchen Lama prolongs the continuous torture inflicted upon the monks and residents of Tashilhunpo Monastery, the seat of the Panchen Lama, who long for the day they can receive blessings from their root guru in person.

See below to read the full submission. 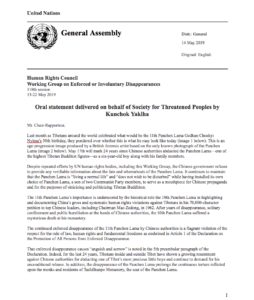 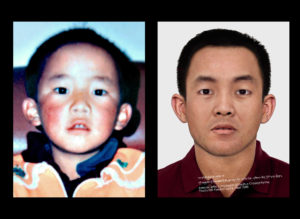 A comparison image showing Tibet’s 11th Panchen Lama, Gendun Choekyi Nyima as a young child on left and how he may look like at the age of 30 on right after his abduction by the Chinese Government. Image created by Tim Widden, UK Specialist forensic artist.