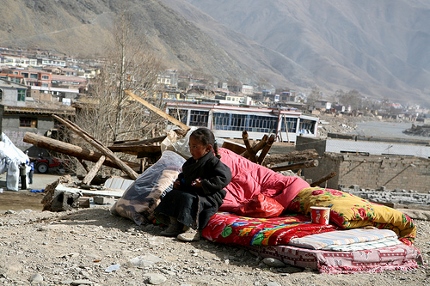 The Tibetan plateau has experienced higher levels of seismic activity, according to reports over the past year, with worrying implications and risks for China’s dam construction in the region.

Dam building in China has seen a huge increase under the 12th Five Year Plan, which pledged that 15% of energy production would come from renewables, primarily from hydropower. The result has been a surge of dam building in China’s south-west, with dam cascades to be constructed on the Yangtze, Mekong and Salween rivers on the Tibetan plateau, across parts of Qinghai, Sichuan, Yunnan provinces and the Tibet Autonomous Region (TAR).

An estimated 60 dams will be constructed in the region, with 20 already built and 40 still in the planning stages. However, exploiting the rich hydropower potential of the region comes with high geological risks. A 2012 Probe International report noted that “98.6% of all of these dams, and 99.7% of western China’s electricity generating capacity will be located in zones with a moderate to very high level of seismic hazard.”

Several unexpectedly severe earthquakes were recorded in August 2013 in Tibet’s Kham region, an area where seismic activity has been historically low. Before last year,  only two major earthquakes had been recorded in the area since 1480. The two earthquakes in August, which measured from 4.2-5.7 in magnitude on the Richter scale, caused 87 casualties and damaged 45,000 houses. The scale of the earthquakes is particularly worrying given the proximity to four large hydropower dams planned for construction on the Lancang (Mekong) nearby.  The Rumei (or Rongmei in Tibetan) hydropower project, will be one of the highest dams in Tibet once complete and at 315 metres, the second highest in the world.

Though dam plans in the region may have been based on an assumption of low seismic hazard in the region – the Global Seismic Hazard Awareness Program estimated only a 10% probability of moderate earthquakes in 50 years – the unusual events in August signify that past evaluations may be a gross underestimation of future seismic risks.

“In an area like south-eastern Tibet, with such complex geology and fault lines, just because nothing’s happened in the past doesn’t mean nothing will happen in the future,” said Adrian Moon, a geologist who has been monitoring earthquake activity in the Kham region and Tibetan plateau since 2009. Both the Christchurch earthquake and Japan’s Tohoku earthquake in 2011 (at magnitude 6 and 9 respectively) were unexpectedly severe, far beyond what buildings and cities were designed to withstand; and according to Moon, a similar future event in the Tibetan region cannot be ruled out. Although Chinese regulations stipulate that dams be designed to withstand seismic activity, the New Zealand and Japanese cases demonstrate what happens when “an unexpected event overwhelms calculated risk factors.”

Dam building remains a controversial issue in China, both for the social impacts domestically and the ecological effects downstream in neighbouring countries. In 2011 concerns about the destructive effects of large dams on fisheries prompted prominent Chinese geologist, Fan Xiao, to write an open letter to the state government, objecting to the reduction of a rare fish reserve on the Upper Yangtze to make way for the Xiaonanhai dam – a violation of the government’s own environmental protection rules.

Some scientists have blamed large dams for triggering previous earthquakes, most notoriously, the role of the Zipingpu dam in the Wenchuan earthquake in 2008.

Consistent and severe seismic activity combined with the concentration of dam construction on the Tibetan plateau could have catastrophic effects if an earthquake causes a dam to fail, creating a “domino effect”, as a surge of water collapses cascades of dams further downstream. The course of the Mekong and Salween rivers flow over active fault lines, making such events a legitimate concern.

The pressing need to secure China’s energy supplies means that long-term seismic risks are currently overlooked. China aims to double its power generating capacity by 2030, with 20% coming from renewables and hydropower. Ultimately, local communities in China’s south-west need a greater say in the construction of such large dams; it is these people who will feel the consequences should they fail.