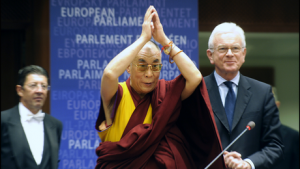 “The situation in Tibet is very desperate. It is urgent that the international community sends fact-finding delegations to the Tibetan area to investigate the situation on the ground. This will have a restraining influence on the Chinese authorities,” he said in written remarks sent to EUobserver during his visit to Prague on Monday (12 December).

“Should the Chinese side reject the request, the EU could issue a strong statement of deep concern and raise the issue at international fora, such as the United Nations Human Rights Council.”

He noted that China cares about its international reputation and is not immune from Arab-Spring-type events.

“As powerful as China may be, she is still part of this world and cannot escape the global trend toward more freedom and democracy. The international perception of China is of great importance to the Chinese leadership – China has the ambition to play a leading role in the world.”

Ashton’s diplomats say they have already made formal requests to visit the disputed region.

But China’s man in charge of Tibet, vice-minister Zhu Weiqun, at a rare meeting with press in Brussels also on Monday, ruled out the possibility.

“China is an independent country and we have the full capacity to handle problems on our territory. So under no circumstances will we allow foreign fact-finding missions into the Tibetan autonomous region … I don’t believe that the interference of any foreign force could achieve anything constructive. Indeed it could very well lead to an escalation of the crisis and to wars,” he told this website.

He made a veiled reference to the EU’s need for Chinese financial assistance.

“EU-China relations are all the more important due to the financial crisis … I don’t see why at this point in EU-China relations the EU lets so many people point fongers at China’s internal affairs. I don’t recall China finger-pointing at EU affairs.”

“I do hope that from the EU institutions some efforts could be made to persuade those people who have a habit of making irresponsible remarks against China to learn more about this issue instead of pointing fingers,” he said.

The official narrative on Tibet is that China in 1951 “liberated” the region from feudalism and has over the past six decades created economic prosperity.

He called the Dalai Lama a “savage” who gets young monks to set themselves on fire to provoke anti-Chinese feeling. He added that Chinese intelligence has evidence the head-in-exile of the Kirti monastery in Tibet, Kirti Rinpoche, organised three of the 12 recent self-immolations. He also said a “Dalai Lama group” in Taiwan recently published an article saying monks who kill themselves will be reincarnated as Buddhas.

For his part, Magiello sided with the Dalai Lama and international NGOs, such as Human Rights Watch, who see the self-immolations as a reaction to Chinese repression.

“We are concerned about the recent cases of self-immolations because these in our view seem to reflect the desperation of some Tibetan people regarding the erosion of Tibetan culture,” he said.

He declined to use the Chinese formula of “so-called prime minister” for Lobsang Sangay, calling him instead the “prime minister of the Tibetan government-in-exile.”

Dalai Lama envoy Kelsang Gyaltsen told EUobserver that China tries to pin inflammatory statements made by some exiled Tibetans on the official movement in order to discredit its non-violent credo.

When asked by EUobserver to show it a copy of the pro-self-immolation article mentioned by Zhu, the spokesman for the Chinese EU mission, Wang Xining, said: “The … article is difficult to locate on internet. Sorry.”