Chinese authorities must investigate the real cause of the deaths by self-immolation of more than 30 Tibetans, the Dalai Lama said in Hawaii Monday.

“Now the time comes for the Chinese authority must investigate what are the real causes,” the Dalai Lama said, speaking at his only news conference at the end of a four-day visit to Oahu. 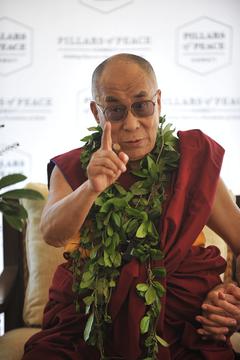 He described the self-immolations as “very, very sad” but said it was important to understand the conditions that caused them.

He laid the blame squarely on the Communist Chinese government that has occupied his home country and kept him in exile for more than 50 years.

As is typical of the Dalai Lama, however, he also found hope in the tragedy — that the Chinese government might actually institute much needed political reform, not only in Tibet but in mainland China, where citizens in four provinces have revolted against Beijing over a range of issues.

The Tibetans who have burned themselves to death have been described by the Chinese as terrorists, outcasts, criminals, and mentally ill. They have blamed the Dalai Lama for encouraging the burnings.
Worsening Conditions

The Dalai Lama said the suffering of his people began to intensify in 1989, as did Tibetan resentment against the Chinese. By the 1990s, the Chinese party secretary banned classical texts used for teaching at Tibet University.

Events worsened by 2008, he said, with the deaths or disappearances of hundreds of Tibetans.

Meanwhile, political education programs were conducted in monasteries and nunneries; Buddhist scholars, he said, agree that Buddhism is best understood in the Tibetan language, not Chinese.

Tibetans “feel very proud of that,” he said, but the suppression of Tibetan culture and language is “very much on their minds.”

In effect, some Tibetans, as nonbelievers in violence toward others, felt they had to express themselves by taking their own lives in dramatic fashion, he said.

The Dalai Lama described what is happening today in Tibet as the return of a “cultural revolution.”

The self-immolations started in 2009. The most recent was in March.

On Monday, the Dalai Lama suggested political reform from Beijing is necessary. He observed that no less a figure than Chinese leader Hu Jintao has talked about such need because of chronic problems in China.

The Dalai Lama called that “a hopeful sign,” adding that the dismissal of Bo Xilai, the mayor of Dalian — a political hardliner — showed that the majority of the Chinese leadership “is really thinking serious of some change.”

Referring to a maxim from Mao Zedong, the Dalai Lama said that power can no longer come from the barrel of a gun.

“That is unrealistic,” he said, employing one of his favorite words.