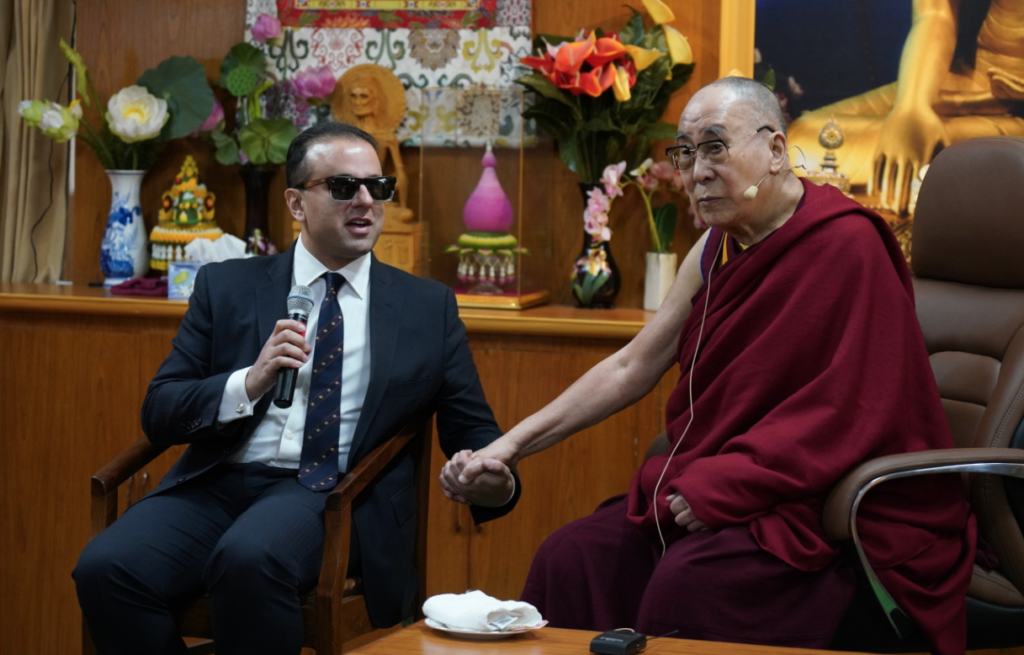 His Holiness the Dalai Lama with Cyrus Habib, the Lieutenant Governor of Washington. Photo: OOHHDL

Dharamshala: His Holiness the Dalai Lama led an interactive conversation on “Cultivating Compassion in the Next Generation” with a delegation from Washington State at his residence this morning. The discussion saw the involvement of youth and community leaders from Washington state led by Cyrus Habib, the Lieutenant Governor of Washington.

Apart from that, over 1500 members participated in the discussion through video conferences from 6 different universities and institutes in Washington DC including groups at Seattle University, Whitman College, Evergreen State College, Edmonds Center for the Arts, Temple De Hirsch Sinai in Seattle and Gonzaga University. The discussion dwelled on topics including mitigating climate change, overcoming inequality and improving civil discourse in politics.

Also in the presence were 6 scholars from Compassion Scholar Program who wish to make their community more compassionate. The program draws its inspiration from His Holiness wisdom to serve others in the face of suffering.

His Holiness remarked that he considers meeting such as this kind to be really meaningful and effective as he explained about his principal commitments, one being the advancement of human values that are deeply rooted in human nature such as compassion, warm-heartedness, and forgiveness, etc.

“The real human nature one that is unfiltered is primarily displayed by the children when their innocence has not been tempered by the materialistic values and goal” explained His Holiness the Dalai Lama. He added that modern human is now increasingly equating happiness with wealth, possession, and power as a result of the inadequacy in modern education.

“The existing education is not adequate to take care of human values and ethics. Warm heartedness is the key factor to a happy life and happy community,” added His Holiness.

He further noted that the existing education system needs revamping with a focus on educating the mind and emotion.

“Just as antidote counteract poison, our destructive emotions can also be counteracted by constructive emotions like compassion. When you are warm-hearted everything else appears positive to you. In contrast, self-centeredness will only bring fear and negativities, therefore, the practice of altruism is very necessary to retain warm-heartedness,” His Holiness commented. He further emphasised on combining this warm-heartedness with human intelligence in order to not only become a happy person but a sound-minded person as well. 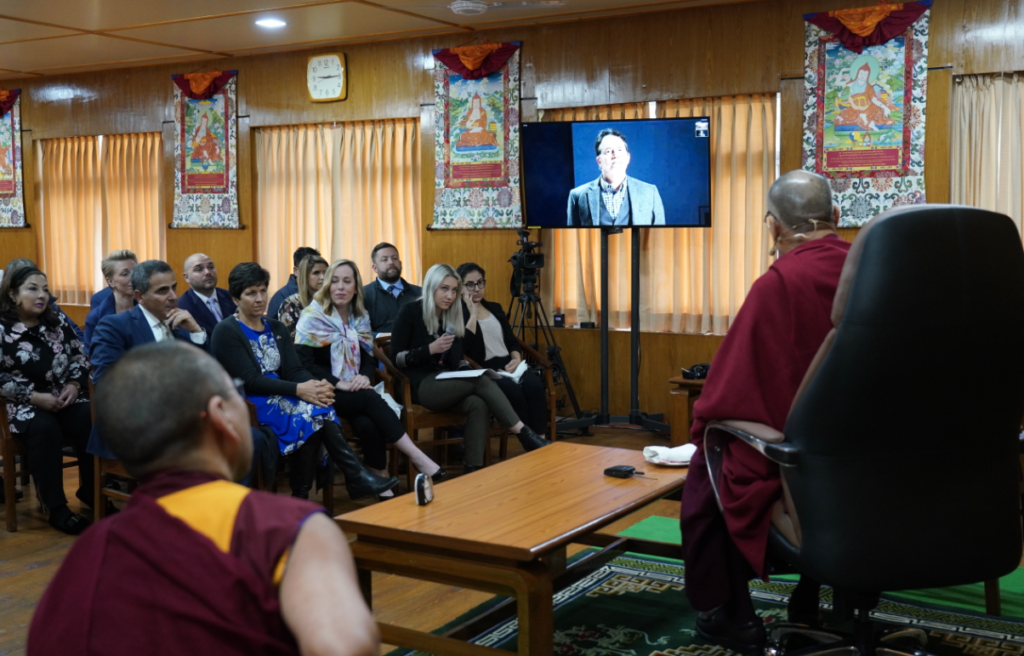 His Holiness engaging in the discussion through video conference. Photo: OOHHDL

In the same vein, His Holiness explained his other principal commitments which are the promotion of religious harmony, preservation of Tibetan language and culture, and lastly restoration of the ancient Indian knowledge.

His Holiness has always been a strong advocate for climate change and related issues and once again he spoke on the subject and urged for serious climate action.

“Our ecology process is very sensitive, once the balance is disturbed it could lead to irrecoverable damage. We have to be cautious and sustainable in use of natural resources” said His Holiness.

Following His Holiness address, each of the scholars explained the projects they will work on inspired by their personal experiences. One scholar aspires to build a program for elderly people facing loneliness and solitude by having them mingled with young kids at school. Another wanted to work for the foster kids while others wanted to raise campaigns to fight discrimination and stereotypes. To each scholar, His Holiness offered pieces of advice on the oneness of humanity and how education is the most effective medium to bring changes on any scale.

“Education you see has the power to mould and shape the future generation. If education lacks the inclusion of basic human values like compassion, it will only generate self-centred and narrow-minded generation” asserted His Holiness.

His Holiness concluded with a clarion urge on imbibing the practice of giving and take which is giving patience and compassion to others while taking in their anger, suspicion, and frustration in order to retain peace of mind and peace of others.

Speaking to Tibet News Bureau, Cyrus Habib, the Lieutenant Governor of Washington said, “Our meeting with His Holiness was beautiful and inspiring.  We also have compassion scholars with us. This is a new program that we have launched in our state to identify young people who are committed to expanding compassion in their communities. They have specific projects that they would like to initiate in their communities. They had the honour to share those projects with His Holiness. it was important to me that before we had a meeting with His Holiness our young scholars would get to see what compassion actually looks like in the real world, in the tradition of His Holiness and the secular ethics that he teaches us all. It is just a great joy for us to be here.”

A scholar also added, “It was a super amazing experience, I feel so lucky. He just exudes so much joy. He is so wise and it was amazing to get to hear from him. I feel so blessed. It was awesome.”

This is the final day of the delegation’s five-day visit to Dharmashala. During their stay, they met with the leaders from all three branches of the Central Tibetan Administration and visited cultural sites including Library Tibetan works and archives, Norbulingka Institute, Tibetan Museum, Tibetan Medical, and Astrology Institute.

The program was organised and facilitated by the Association of Washington Generals and the Office of the Lieutenant Governor of Washington State. 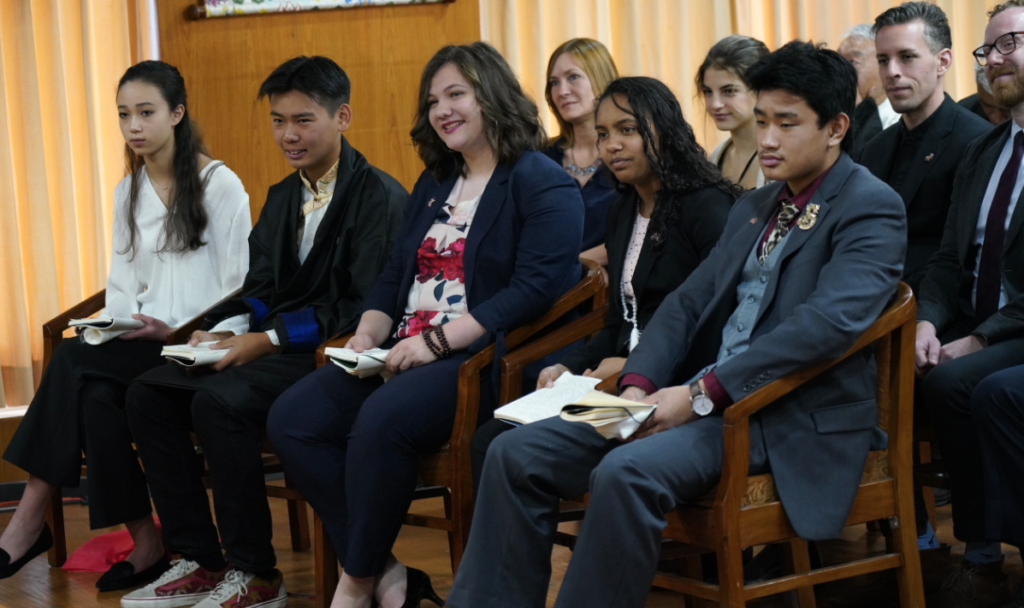 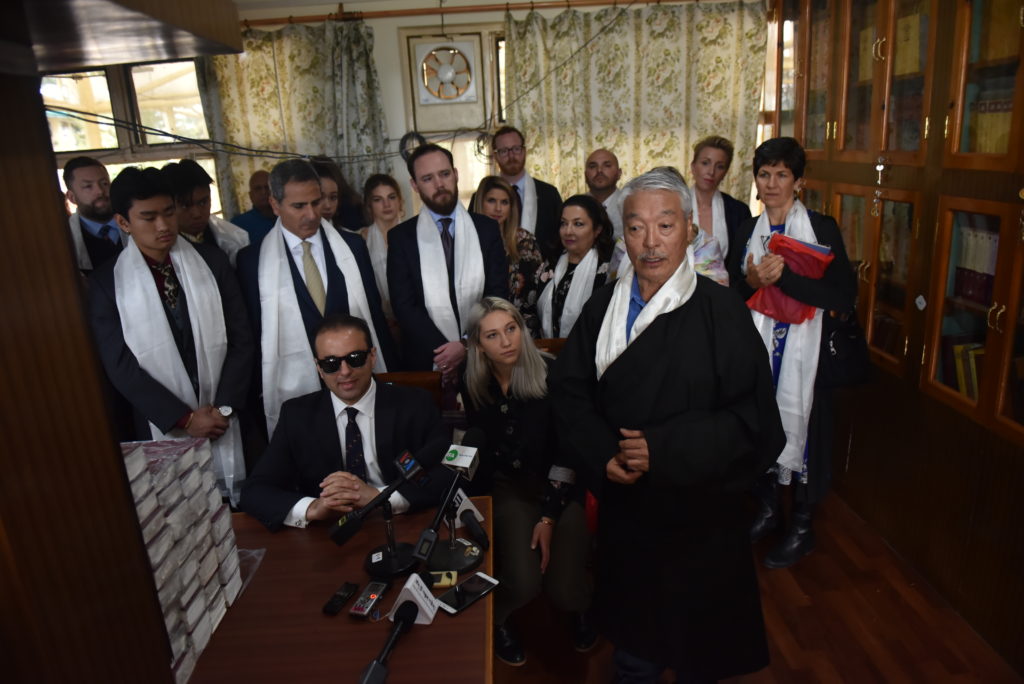