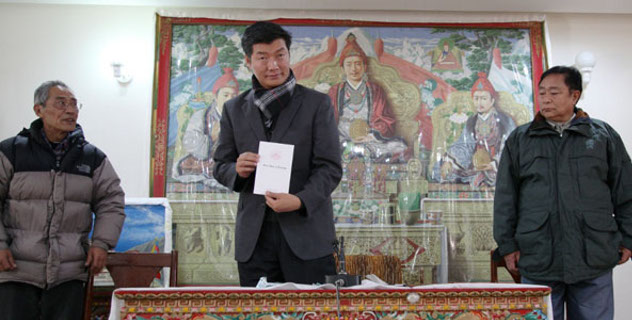 WHY TIBET IS BURNING…

Sikyong Dr. Lobsang Sangay releases the first publication of the Tibet Policy Institute on the fundamental reasons for the increasing number of self-immolations in Tibet.

Dharamsala, 28th January, 2013:   This white paper examines the underlying causes of the increasing number of self-immolations that are currently engulfing Tibet. The Central Tibetan Administration has made many appeals to the Tibetans in Tibet to desist from self-immolation. Despite the Central Tibetan Administration’s repeated appeals to stop the self-immolations, unfortunately the numbers of Tibetans setting themselves ablaze are adding up at an alarming rate and frequency. All Tibetans who have set themselves ablaze have called for the return of His Holiness the Dalai Lama to his homeland and freedom for Tibet. What are the causes which drive Tibetans to such acts of extreme desperation?

The reason lies in China’s massive policy failure in Tibet over the course of more than 60 years of its rule. The revolution that is brewing in Tibet is driven by political repression, cultural assimilation, social discrimination, economic marginalisation and environmental destruction.  98 Tibetans so far, most of them in their teens and early twenties, have set themselves ablaze. According to Chinese communist propaganda, this is the generation that was supposed to have benefitted most from Chinese rule in Tibet. Clearly, though, China’s spectacular policy failure in Tibet has totally alienated the new generations of Tibetans and they express this alienation by asserting their loyalty to His Holiness the Dalai Lama whom they have not seen in their entire their lives and who has not set foot in Tibet for more than 50 years.

China’s failure to solve the fundamental problem of its rule in Tibet was foreseen in the early days of Chinese rule in Tibet by eminent Tibetan leaders working within the Chinese communist establishment.  As far back as the early 1960’s, these Tibetan leaders strongly decried Chinese communist rule. In an act of unprecedented courage and boldness, the late 10th Panchen Lama presented a 70,000-character petition addressed to the top Chinese leaders, which, though diplomatically worded, amounted to an accusation of China committing cultural genocide in Tibet. This blistering critique of the nature of Chinese rule in Tibet cost the Panchen Lama dearly. Mao Zedong called the Tibetan leader “our class enemy” and denounced his 70,000-character petition as a “poisoned arrow.” He was “struggled”, sometimes violently, and subjected to imprisonment and solitary confinement for many years. When he was released from confinement in the aftermath of the death of Mao Zedong, the Panchen Lama rebounded, and in 1989, stated that Tibet had lost more than it gained under Chinese communist rule. He made these comments only a few days before his mysterious and untimely death.

Arjia Rinpoche, the abbot of Kumbum Monastery in Tibet, held many important posts in the Chinese Buddhist Association. In 1998, when increasing pressure was exerted on him to recognise the Chinese-appointed Panchen Lama, he fled to America. “Modern Chinese history,” he says, “can be characterised as a ‘Tale of Three Fish.’ Taiwan is still swimming in the ocean. No one has caught that fish – at least not yet. Hong Kong is alive but on display in a Chinese aquarium. Tibet, the third fish, is broiled and on the table, already half devoured: its language, its religion, its culture and its native people are disappearing faster than its glacial ice.”

The late Ngapo Ngawang Jigme, one of the most prominent Tibetans who had worked with the Chinese communist establishment and was considered one of the national leaders of the People’s Republic of China, said at a party congress many years ago that the dearest wish of all old Tibetans was to see the Dalai Lama before their death. This would fulfill all their fondest hopes.

This universal wish of the Tibetan people was reiterated by Baba Phuntsog Wangyal, the founder of the Tibetan Communist Party, in one of the several letters he addressed to the top Chinese leaders on the issue of Tibet. “Therefore, most people in Kham, in (Central Tibet) Tibet and Amdo miss their spiritual leader, the Dalai Lama, from the bottom of their hearts. They trust and rely on him and ask him to grant favour to them and pray for them.”

This stark judgment of Chinese rule in Tibet describes the reasons that drive so many young Tibetans in Tibet to self-immolation. Daily, they see and experience China’s constant assault on Tibetan Buddhist civilization, Tibetan language and their very identity. They strongly resent the Chinese communist party’s active interference in their spiritual life, including the attempt to appoint Tibetan spiritual leaders. They resent to the core of their being China’s demonization of His Holiness the Dalai Lama and the policy of forcing monks to denounce him. They look on with alarm and fear as Chinese settlers stream into Tibet, taking away Tibetan jobs, land and their very future—and in the process, transforming Tibetan towns and cities into so many Chinatowns. They resent the forced removal of nomads from the grasslands, away from their animal herds and their source of livelihood, and settling them on permanent housing structures, which bring no income, and reduce formerly self-sufficient families to impoverishment. At the same time the Tibetan people see massive development activities undertaken on their land that bring little or no benefit to them and aimed, instead, to cart away Tibetan natural resources to a resource-hungry China.  In fact the policies of the Chinese communist party demonstrate to the Tibetan people that China wants Tibet but not the Tibetan people.