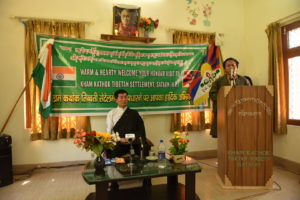 While addressing the Tibetans Dr Sangay briefly mentioned about the Tibetan Rehabilitation Policy Act, Where he mentioned CTA’s emphasis on the sustenance of Tibetan settlement all over India particularly Uttarakhand.

He further informed the public on Gangjong Development Finance Pvt. Ltd under which 100-million rupees loan scheme is facilitated for Tibetan hosiery and sweater traders at a relatively low-interest rate of 3% was rolled out. The scheme was highly successful with at least 90% of the loans already recovered. Similarly, the President also notified that many such initiatives are yet to be established by CTA.

He shared his experiences in the administration then and now and the development that has taken place over the years socially, economically and in the field of education. One such apparent progress the President mentioned is the increasing number of different scholarship programmes provided by the Department of Education in the last few years.

Dr. Sangay noted that education is Kashag’s key priority which is why there is now a rising number of exemplary students in Tibetan schools who are excelled in academics. On the importance of the Tibetan language, President commented that various opportunities are provided at different monasteries for learning Tibetan language and Buddhism.

Once again President Sangay enlightened them about the progress of Five-Fifty vision.

“Tibetan people have been supportive everywhere I traveled. It gives me immense pleasure to see them gather wherever I visit” he added.

Dr. Sangay assured the public that the health of His Holiness the Dalai Lama is stable and expressed His Holiness need for a good rest. 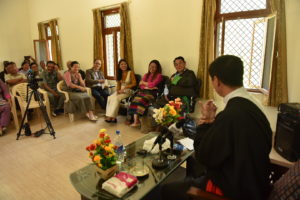 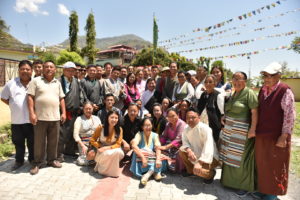