DHARAMSHALA: President of the Central Tibetan Administration Dr Lobsang Sangay accompanied by Secretaries Sonam Norbu Dagpo and Tenzin Dhardon Sharling of the Department of Information and International Relations (DIIR) launched the yearlong ‘Thank You India’ campaign today at a press conference at the Press Club of India in New Delhi.

Kalon Ven Karma Gelek Yuthok of the department of Religion and Education accompanied by Education Secretary Karma Singhe and Representative Dongchung Ngodup accompanied by Tsewang Gyalpo Arya, Secretary of Bureau of His Holiness the Dalai Lama, were also present at the press conference.

“It also marks 60 years of Tibet under China which is the sad and tragic chapter of Tibet’s history. However, the last sixty years of Tibetan community in exile has been a story of success,” President Dr Sangay said.

“The success of the Tibetan people, also referred to as the most successful refugee community in the world, is due to the support of the international community particularly India and its people,” he said.

“For this reason, the CTA is orgainising a series of events to mark 2018 as thank you year. It is a gesture of our gratitude to India for the support and encouragement that have enabled exile Tibetan community under the leadership of His Holiness the Dalai Lama to survive as a productive and cohesive community outside Tibet,” he announced.

Explaining the importance of India in strengthening the Tibetan movement, President Dr Lobsang Sangay first spoke about His Holiness the Dalai Lama and his respect for India.

“His Holiness the Dalai Lama calls himself as a ‘son of India’ because His Holiness has survived on the nutritious Indian Dal roti for the better part of the last sixty years, and also because his mind is filled with the rich knowledge of ancient India,” he said.

He further explained that the current crop of leaders heading the Tibetan movement is mostly educated by Indian teachers in the schools established with the support of the Indian government, jokingly referring to the Tibetan movement as the first and original product of India’s ‘Make in India’ initiative.

Speaking about the Nalanda Tradition, Dr Sangay said that the Nalanda tradition of developing the heart and mind has enriched the Tibetan people for centuries. However, he lamented the fact India which is home to Buddhism has only few Buddhist followers today.

“China has destroyed almost 95% of Tibetan monasteries and nunneries. However, under the visionary guidance of His Holiness and the support of Indian government, Tibetan Buddhism is thriving now,” he said.

“Not just in Tibetan community, Tibetan Buddhism is now also thriving in the Himalayan belt as a result of His Holiness the Dalai Lama’s efforts. His Holiness now wants to revive this ancient knowledge throughout India,” he explained.

Secretary Sonam Norbu Dagpo said that Tibetans have been able to preserve and promote its rich culture in exile only with the support of the Indian government and people. Therefore, he said that the Tibetan administration will observe 2018 as year of gratitude with a series of pan-India events spanning 12 months.

“Tibetans will thank India for ensuring the success of the efforts of the Tibetan people: promoting its rich ancient culture and unique identity, assuring the viability and sustainability of the Tibetan leadership and Tibetan communities and leading the Tibetan struggle through steadfast commitment to non violence and dialogue,” he said.

Secretary Dhardon Sharling explained that the ‘thank you India’ programme will be executed both on the ground and on the virtual space to publicly express gratitude to both the Indian government and the people.

She also outlined some of the programmes of the yearlong campaign which include a ‘Pray for India’ interfaith prayer meeting, an initiative to feed the hungry, cover the cold, mass tree plantation drive, mass participation in India’s Yoga day, cleanliness drive, etc.

She further said that all the activities will also be featured on social media with #thankyouIndia2018.

The press conference also saw the launch of the Thank You India souvenir – a dharamachakra, wheel of universal truth- and calender 2018. 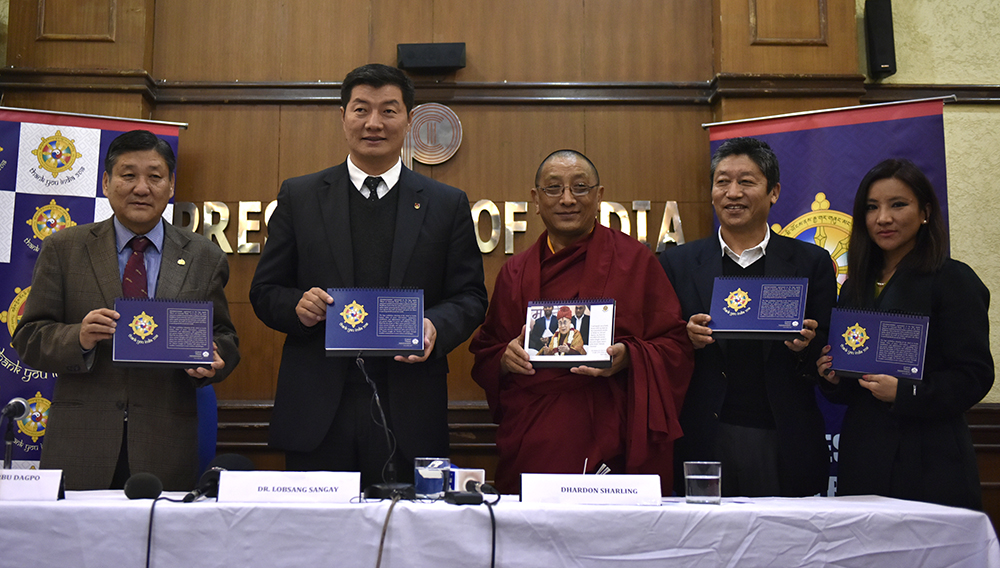 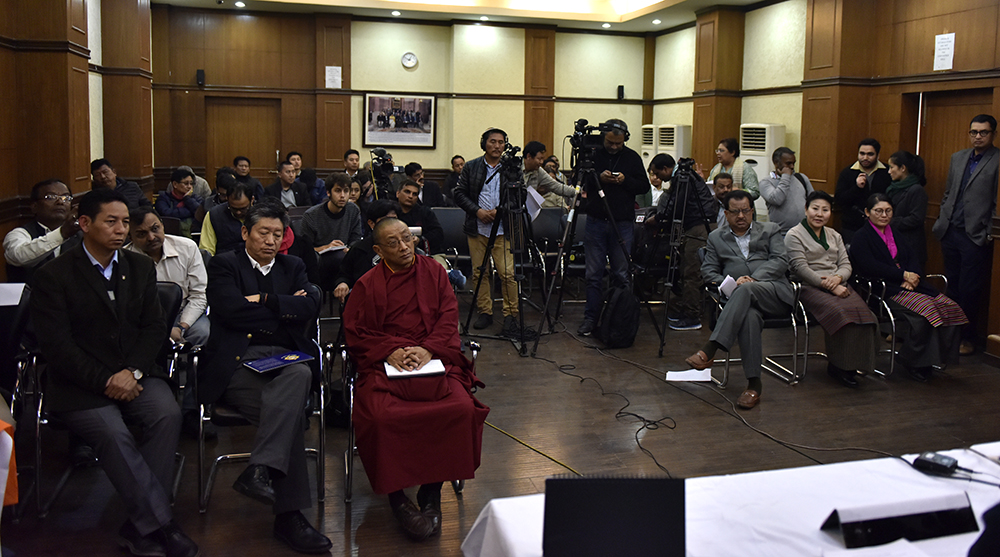 Members of the press during the press conference at Press Club of India, New Delhi on 12 January 2018. Photo/Tenzin Phende/DIIR 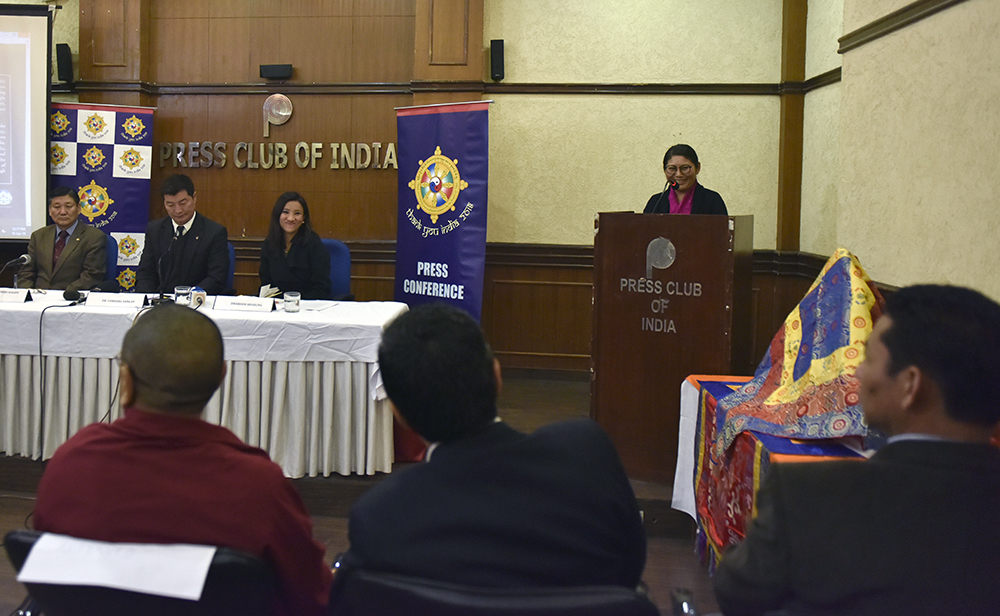 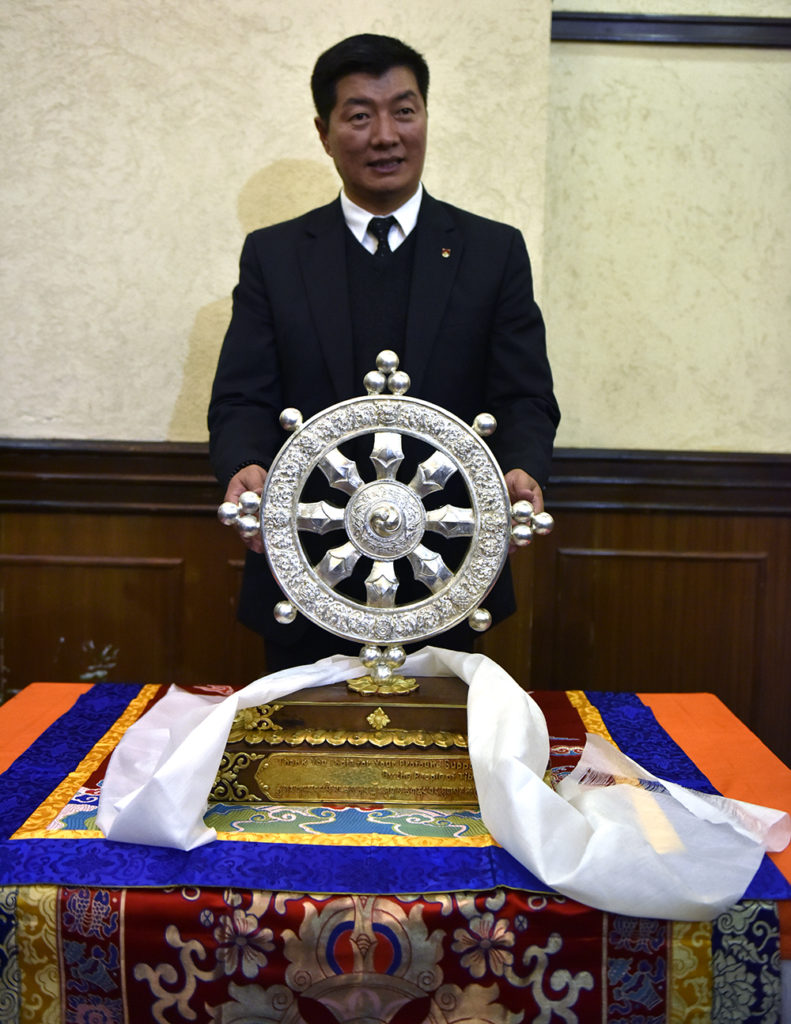 CTA President with the thank you India souvenir – a Dharamchakra representing wheel of Universal Truth at the press conference, 12 January 2018. Photo/Tenzin Phende/DIIR