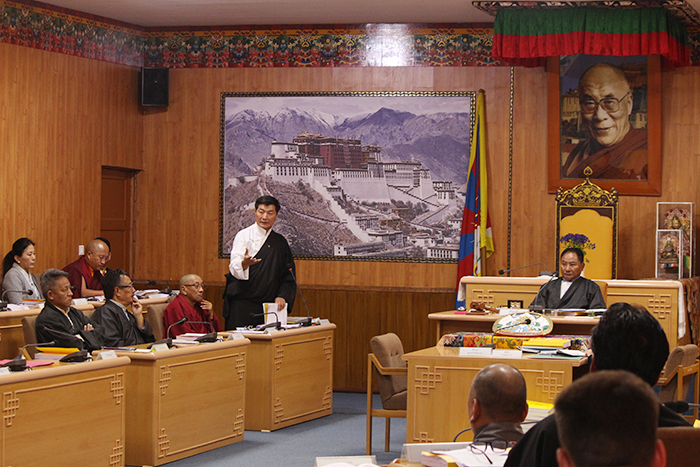 President Sangay deliberated on the vision’s background, past activities and future prospects. He further urged the parliamentarians as well as all Tibetans to deliberate, express opinion and incorporate the vision in practice.

President Sangay on how this vision took seed recalled the day he had a private meeting with His Holiness the Dalai Lama. He said, “At the meeting, His Holiness the Dalai Lama told me that the political responsibility now rests entirely on me. His Holiness further asked that all future endeavors should be strategized as if he is not there. I was not able to take in these words. As a Tibetan, a Buddhist and an ardent follower of His Holiness the Dalai Lama, I was overwhelmed with emotion. I had only come here with the motive to serve His Holiness the Dalai Lama and to fulfill his every counsel with full dedication. With a heavy heart, I returned home and did not tell my family or my fellow Kalons. However, as the CTA President, I had to meet His Holiness the Dalai Lama regularly and I had to follow through his advice. Yet, I could not put in words this unimaginable situation to my fellow Tibetans. That was the moment I first thought of Five Fifty. A vision that caters to the immediate five years and also calls for deliberation on strategies for the coming fifty. I thought if I went with this, then there will be discussions among Tibetans, in the Kashag, the Parliament and so on. Recommendations will be made, policies can be formulated and then implemented on.”

President Sangay then went on to emphasize the gravity of the responsibility. “For more than 70 years,” he said, “His Holiness the Dalai Lama has elevated the cause of Tibet in the world, empowered the Tibetan polity in exile into a fully functioning democracy and fuelled the Tibetan spirit both in and outside Tibet that is still alive and thriving in third generation Tibetans. It is now upon us Tibetan people that we do justice to his legacy and not fall short of his expectations.”

President Sangay explained that the vision was there from 2012, 2013 and 2014, but its practice came into fruition just recently as the Kashag wanted to lay the groundwork first. He said, “Till now considerable progress have been made. All the Departments of the Central Tibetan Administration has been executing major projects towards this end. The Department of Religion in its effort to preserve and promote Tibetan religion and culture, actively assisted, in the renovation of monasteries/nunneries, facilitated teachers and presented remote monasteries/nunneries with Buddha’s idols. In relation to Department of Homes, the formalising of the Tibetan Rehabilitation Policy 2014 provided a clear policy statement about the welfare of the Tibetans in India including matters concerning land lease and the extension of Central and States benefits among others. The Department of Finance is working on the project of creating a Tibetan bank and also providing loans with low interest rates to Tibetan businesses in order to encourage self-reliance among Tibetans. The level of security for His Holiness the Dalai Lama is better than ever. The Department of Health has piloted the Tibetan Medicare System (TMS).”

On the Five Fifty conferences held, President Sangay elucidated their origin. “Our primary goal is to gain Genuine Autonomy through the Middle Way Approach and the return of His Holiness the Dalai Lama to Tibet. It was felt that inputs from eminent scholars is needed and hence the Forum titled ‘Shaping Tibet’s political future’ came into being. The participants lauded the forum and expressed that a similar forum for the youths can be beneficial and hence the Youth Forum was convened. And similar forum to deliberate on encouraging resiliency of Tibetans in exile was also felt which resulted in the Forum on resilience. The opinions expressed were compiled into booklets. However, this is not official and does not necessarily entails the CTA’s views”

President Sangay then mentioned the upcoming Five Fifty Special Conference and urged all Tibetans to learn the themes of the conferences held and add to the opinions and suggestions.

The sub topics of the Youth Forum were; Theme 1: Tibet and PRC: Importance of Historical ties and establishing constructive engagements and negotiations, Theme 2: Young voices in the Tibetan Freedom Movement: Communications, Advocacy and International Relations, Theme 3: Inclusion of and responses to Tibetans inside Tibet and Diaspora and Theme 4: CTA’s Leadership towards the Five-Fifty Vision – creating visionary leadership, and resource mobilization.