Emmanuel Macron, President-elect of France with His Holiness the Dalai Lama in September 2016. (file pic)

“ I, on behalf of the Central Tibetan Administration, heartily congratulate you for winning the French presidential election,” Sikyong Dr Lobsang Sangay said.

“Your decisive victory in the French election is a reflection of the French people’s deep rooted faith in the spirit of reconciliation and integration that you have advocated as part of your En Marche campaign.”

“It is a testament to the strength and resonance of France’s three founding principles – Liberty, Fraternity and Equality – in these divided times.”

“France is also one of Tibet’s strongest supporters in the European Union. In fact Paris, the Capital of France, has bestowed an honorary citizenship on His Holiness the Dalai Lama in an expression of strong support and solidarity with Tibet and the Tibetan movement in 2008.”

“You have also personally met His Holiness the Dalai Lama in September 2016 and voiced support for the Tibet issue on numerous occasions. Therefore, as you embark upon your responsibility as France’s new President, we remain optimistic of your continued support towards the resolution of the Tibet issue based on the Middle Way Approach.”

“As France’s youngest president, we are also hopeful of the fresh impetus that you will inject in global politics and the culture of democratic patriotism,” Sikyong said. 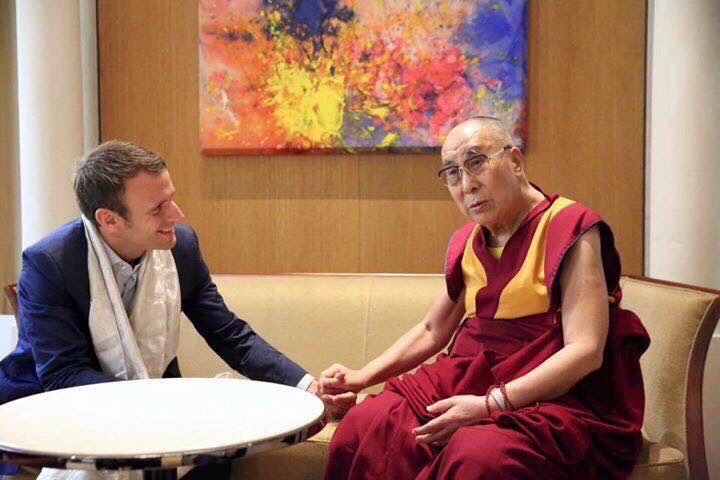 Emmanuel Macron, President-elect of France with His Holiness the Dalai Lama in September 2016. (file pic)