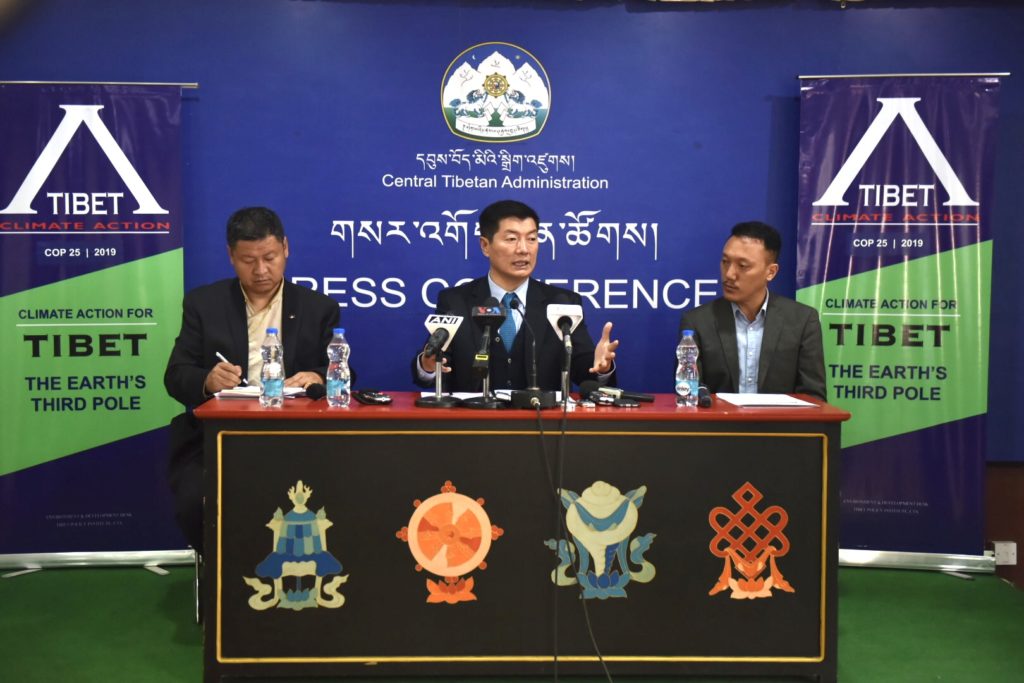 Dharamshala: Ahead of the COP25 UN Climate Summit to be held in Spain on December 2 -13, 2019, the Central Tibetan Administration launched the 2nd ‘Climate Action for Tibet: The Earth’s Third Pole’ campaign, urging the world leaders to recognize the global ecological importance of the Tibetan Plateau and make Tibet central to any discussion on global climate change.

The launch of the campaign was officiated by President of Central Tibetan Administration, Dr Lobsang Sangay at a press conference this morning.

Sitting at an average elevation of more than 4,000 metres above sea level with an area of 2.5 million square kilometres, the Tibetan Plateau is the highest and largest plateau on earth. With 46,000 glaciers, the region, after the North Pole and the South Pole, is home to the third-largest natural repository of ice, and the largest source of accessible fresh water on earth. This makes it the head source of Asia’s six largest rivers (Drichu/Yangtze River, Machu/Yellow River, Zachu/Mekong River, Gyalmo Ngulchu/ Salween River, Yarlung Tsangpo/Brahmaputra River and Senge Tsangpo/Indus River), flowing into 10 (Pakistan, India, Nepal, Bangladesh, Burma, Thailand, Laos, Vietnam, Cambodia, China) of the most densely populated nations and supporting the lives of 1.5 billion people.

Unfortunately, the Tibetan Plateau has seen an increase in temperature of approximately 0.3 degrees Celsius every ten years. This means that over the past 50 years the temperature has increased by 1.3 degrees Celsius, which is three times the global average. As a result, 82 per cent of the ice has retreated with 66 per cent of the glaciers in danger of melting by 2050. This would have disastrous consequences for the global society in general and in particular for the people of South Asia.

His Holiness the 14th Dalai Lama, Nobel peace laureate and advocate for Tibet’s environment, has repeatedly stressed that “Climate change is not the concern of just one or two nations. It is an issue that affects all humanity and every living being on this earth” and that “there is a real need for a greater sense of global responsibility based on a sense of the oneness of humanity.”

Therefore, the CTA’s COP 25 Climate Action for Tibet aims to bring to the fore the centrality of Tibet in any and all discussion on climate change and its pertinent significance to the global ecology.

To this end, CTA announced a Five-Point Call to Action:

Placing the environmental concerns of the Tibetan people in context, Mr. Tempa Gyaltsen Zamha, Head of Environment & Development Desk of the Tibet Policy Institute, said “Tibet has seen increasing cases of floods and landslides since 2016, primarily due to climate change but exacerbated by excessive mining and construction activities in Tibet in recent years.” He further urged the Chinese government to “implement more pro-active climate awareness programs, adaptation and mitigation efforts, and a proper disaster relief mechanism in the Tibetan areas to reduce possible disasters and its effects.”

In the lead up to the COP25 UN Climate Summit, CTA will observe a series of events geared towards bringing Tibet to the center of climate change discussion. Among others, these include:

COP25 Climate Action for Tibet: The Earth’s Third Pole campaign is an initiative of the Environment & Development Desk (Tibet Policy Institute) of the Central Tibetan Administration. The campaign is a follow up to the hugely successful ‘Climate Action for Tibet: The Roof of the World’ campaign, which was launched four years ago during the COP21 UN Climate Summit in Paris in 2015.