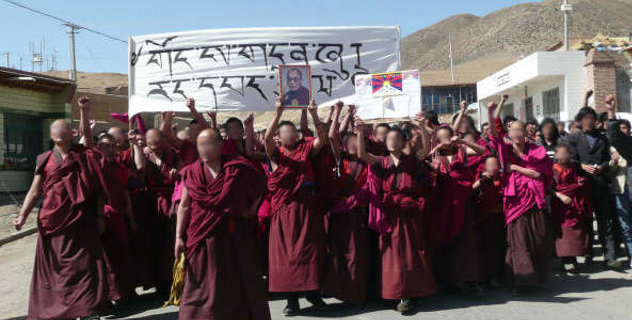 The Central Tibetan Administration will be observing Global Solidarity Day on the occasion of the Human Rights Day on 10th December given the continuing wave of self-immolations with 72 Tibetans having self-immolated so far. 59 self-immolations occurred in this year alone, 7 in 7 days in October and 5 in 1 day in November. This clearly reflects the gravity of Tibet’s current situation in Tibet. Please light a candle or lamp, observe a minute’s silence, and a say a prayer for all those who have died for the cause of Tibet, and locally organise vigils and rallies.

“Despite our repeated appeals not to take drastic actions, self-immolations continue in Tibet. Therefore, I appeal to the international community and governments to stand for justice by answering the universal aspirations of Tibetans in Tibet: the return of His Holiness the Dalai Lama to Tibet and freedom for Tibetans,” said Sikyong Dr. Lobsang Sangay, the democratically-elected leader of the Tibetan people and the political successor to His Holiness the Dalai Lama of Tibet.

The strong and unprecedented statement of United Nations High Commissioner for Human Rights Navi Pillay and visit by U.S. Ambassador Gary Locke to Tibet clearly shows that the situation in Tibet is dire and needs to be urgently addressed. We urge the newly appointed Chinese leaders to accept and cooperate with the 12 outstanding requests for official visits to Tibet by U.N. and international bodies. The Chinese government should implement recommendations made by the U.N. agencies rather than resorting to blame game.

We call on the Tibetan Associations, Tibet Support Groups, Buddhist Centers, and all our friends around the world to form a coalition with as many human rights groups to organise and participate in the Global Solidarity Day. We also request them to dispatch delegations to visit different media organisations in order to create awareness about the ongoing tragedy in Tibet. Equally important is to reach out to as many members of Parliament, Congress and government officials.

On 5 December, we will release a 10-minute video on self-immolations and ask all Tibetans and friends to share it with elected government representatives, government officials, the media, and various social networks. We call on all Tibetans and their friends to post www.tibet.net on their social networking sites from today on to access daily updates and how best they can support Tibet.