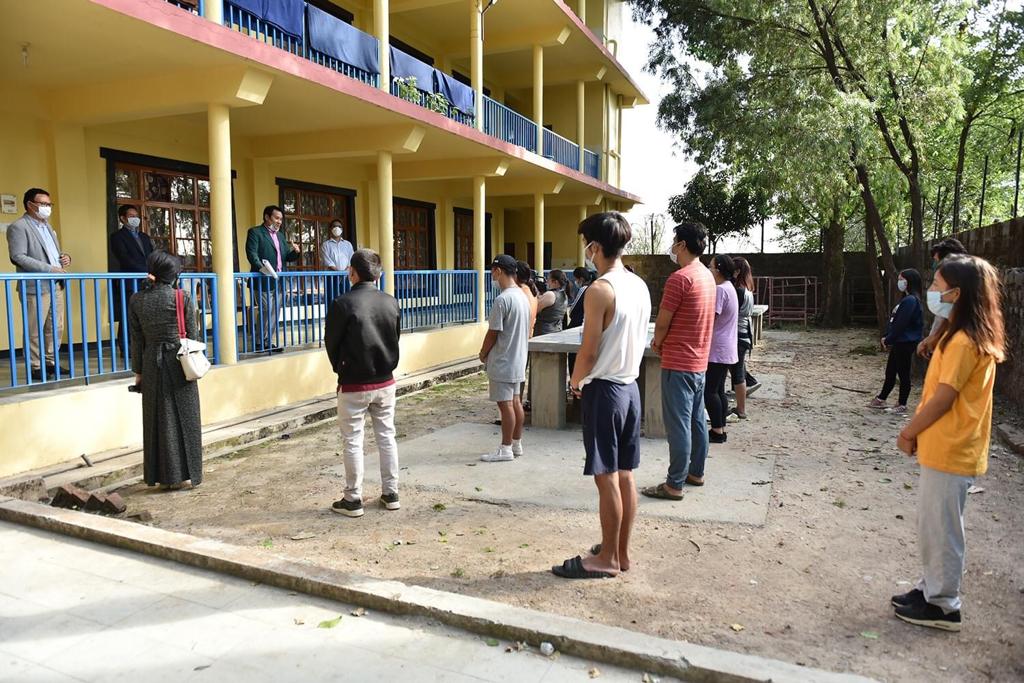 Dharamshala: The Department of Education, CTA brought home the fifth batch of stranded Tibetan students comprising of 15 from Baroda who like many others in the city had to be evacuated in the wake of the rapid spread of COVID-19.

Earlier this month, Tibetan students studying in Maharaja Sayajirao University (MSU), Baroda were notified by the university authorities to vacate the hostel and return to their home states as part of the state’s measures to curb the rapid spread of COVID-19.

As the students turned to the CTA for help, the Education department as directed by the Kashag immediately sprang into action and made travel and logistic arrangements in coordination with Tibetan Settlement Officer, Sameyling Delhi for their safe return.

So far, the Department has been able to bring around 87 students from Baroda to their home states.

The first batch comprising of 29 students safely reached Dehradun on 10 May and have since remained in quarantine at Gaura Mafi, Dehradun administered by Tibetan Homes Foundation (THF).

The second batch of two students who reached Mainpat, Chattisgarh on 12 May have been quarantined at the settlement’s quarantine centre.

The third batch of 10 students reached Leh, Ladakh on Sunday, 17 May and were advised self-quarantine at their homes. 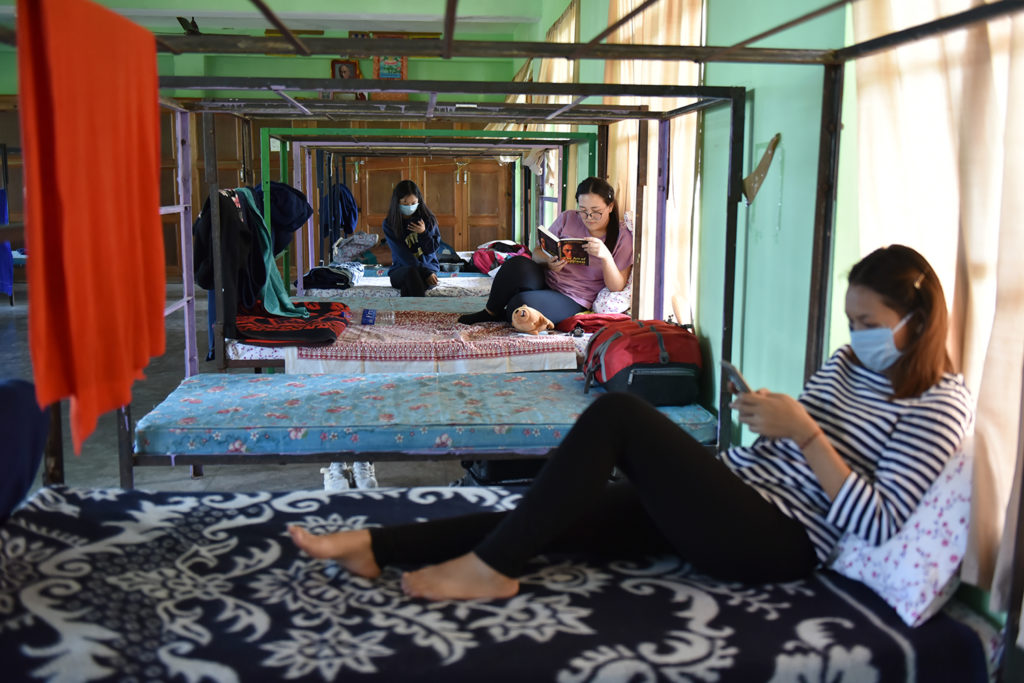 Of the total 19 students from the fifth batch, 15 arrived here at Dharamshala on Tuesday and four were received at Delhi on Monday.

While the four are currently under home quarantine, the 19 students are being quarantined at Sherab Gatsel Lobling School, administered by STSS under the guidance of CTA COVID-19 Emergency Committee.

The Task-Force gave each student a thermometer to monitor any symptoms of COVID-19. The students were safely checked into the well-furnished quarantine facility which was divided into separate quarters for boys and girls and a stocked kitchen with a cook to provide the students with healthy and timely meals.

Health Kalon advised the students to make the best use of their time and concentrate on their studies, and inform the General Director of Sambhota schools and his assistant for any urgent requirements. He told the students that the Sikyong had been apprised of their safe arrival and check-in at the facility.

Kalon Choekyong Wangchuk encouraged the students to avoid stress and anxiety as constant fears about COVID-19 can take a toll on one’s mental and physical health. However, he strictly instructed them to abide by the quarantine norms, follow the advised safety precautions and to do one’s part to slow the spread of coronavirus. 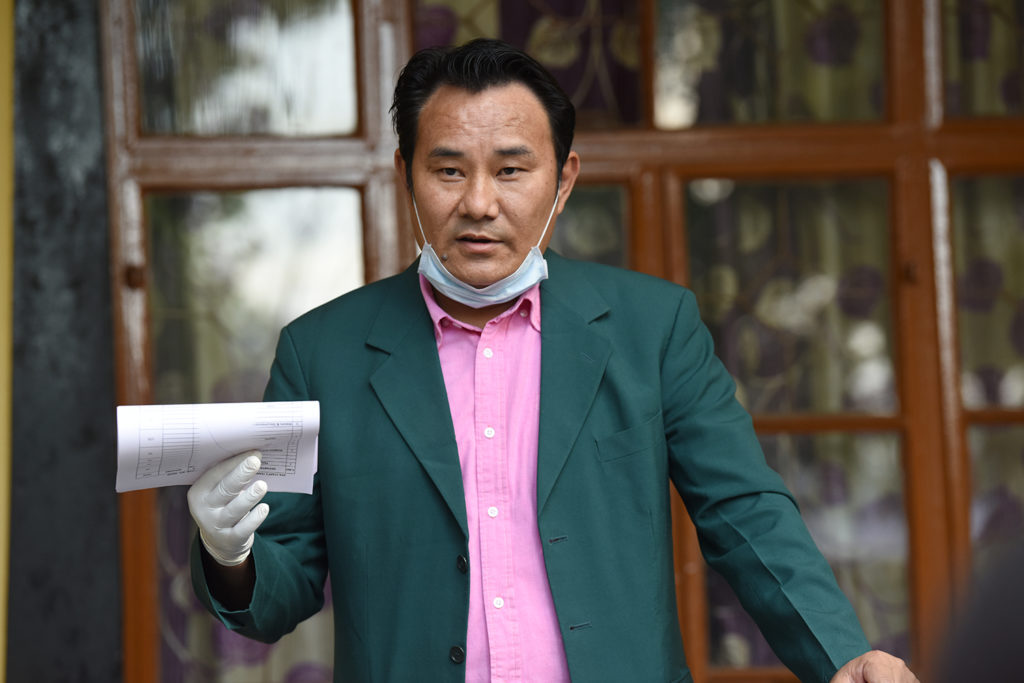 Education Secretary Karma Singey advised the students to abide by the quarantine norms and suggested a student representative to act as the coordinator and to reach out for any queries or necessities through the appointed supervisors. Additionally, he referred them to chanting prayers to calm the mind.

CTA Nodal Officer, Tenzin Kunsang shared with the students her quarantine experience and advised that a positive attitude would make their stay easier and directed them with the applications of the thermometer kit.

Sambhota Director Tsering Dhondup said, the Task-Force committee led by the Health Kalon, Health Secretary, Education Secretary and supervised by the Sikyong,  had after serious discussions decided to turn this institute into a proper quarantine facility. He expressed his confidence that all efforts are being made to make it a comfortable and safe stay for the students.

Dawa Tsering, student representative expressed gratitude to the CTA for bringing them safely to Dharamshala. He gave a detailed account of their interstate travel, RTYC, Baroda-cum Tibetan Students’ Association Baroda’s initiatives and their brief ordeal in procuring the travel pass.

Jamyang Choedon, an MEd student spoke gratefully of the facilities they had received in terms of the travel allowance and the quality care provided at the facility. 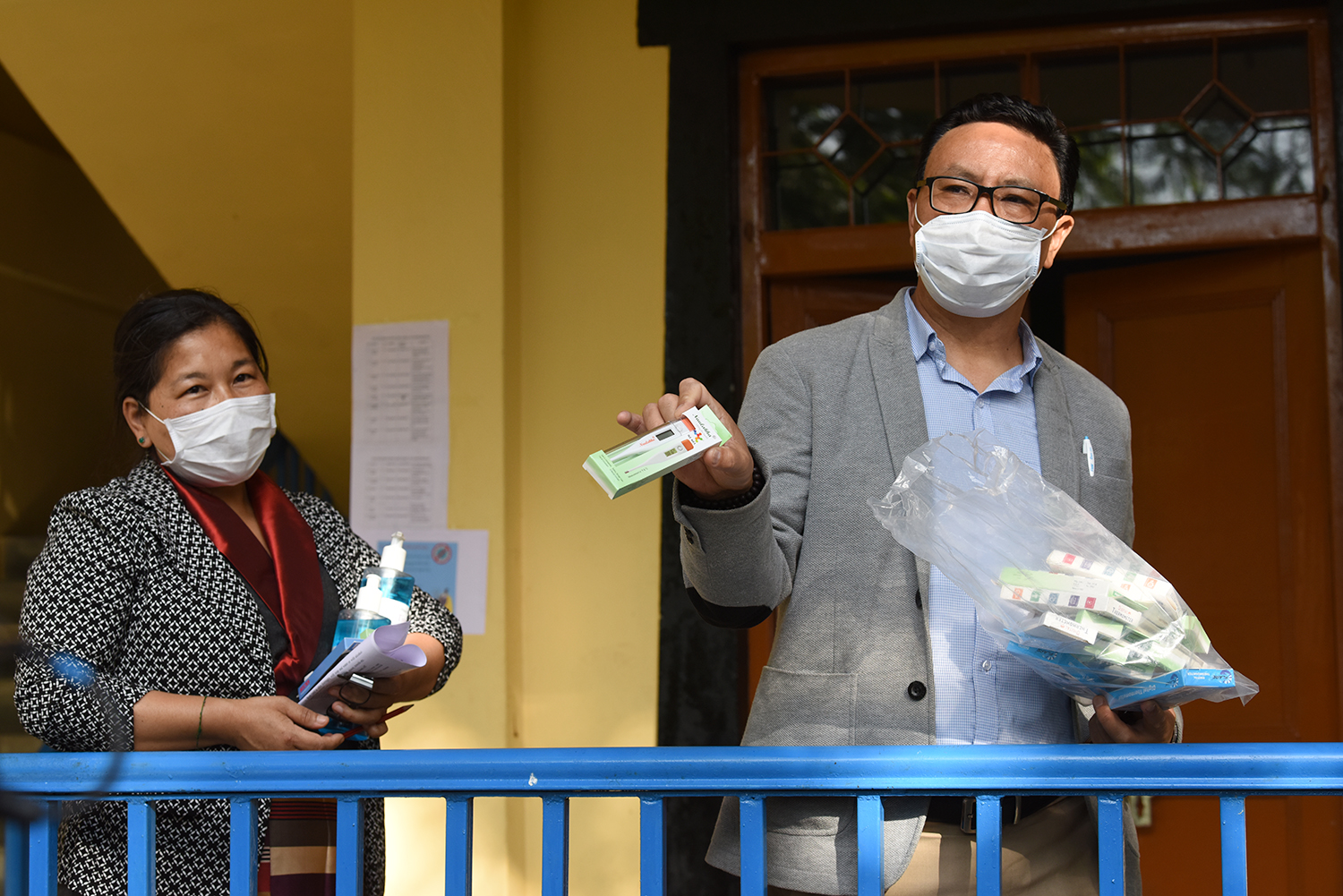 Health Secretary Palden Dhondup briefing the students on how to administer the tests. Photo/Tenzin Jigme/CTA 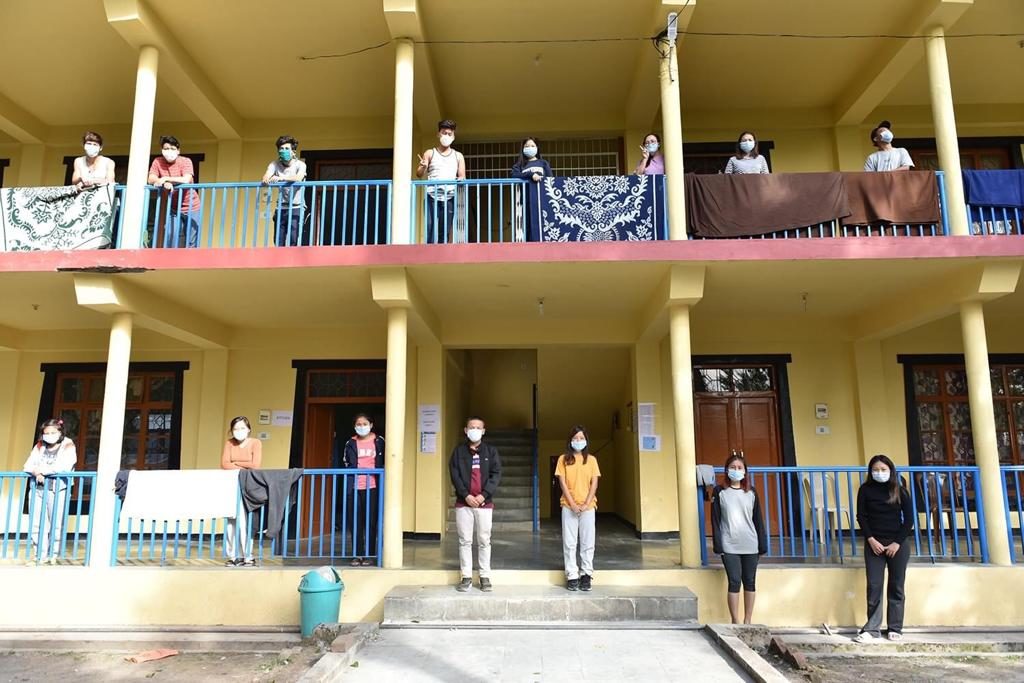 The formerly stranded students are safely brought home and placed in quarantine under the CTA initiatives. Photo/Tenzin Jigme/CTA 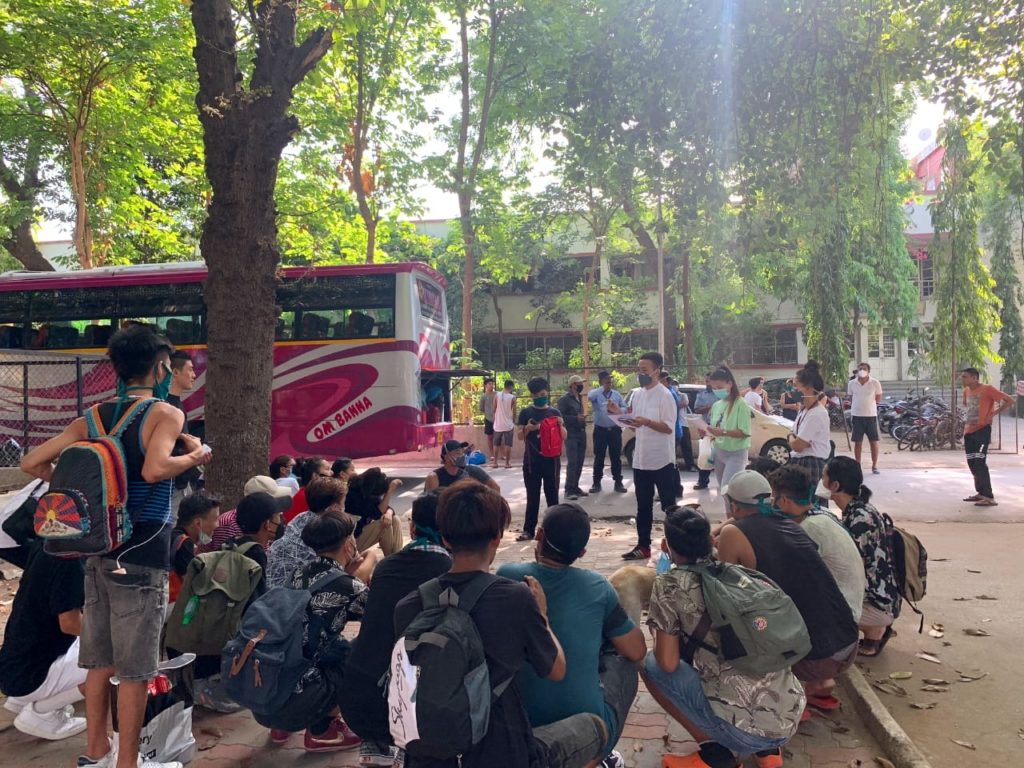 The first batch of stranded Baroda students safely reached Dehradun on 10 May and have since remained in quarantine at Gaura Mafi, Dehradun administered by Tibetan Homes Foundation (THF). 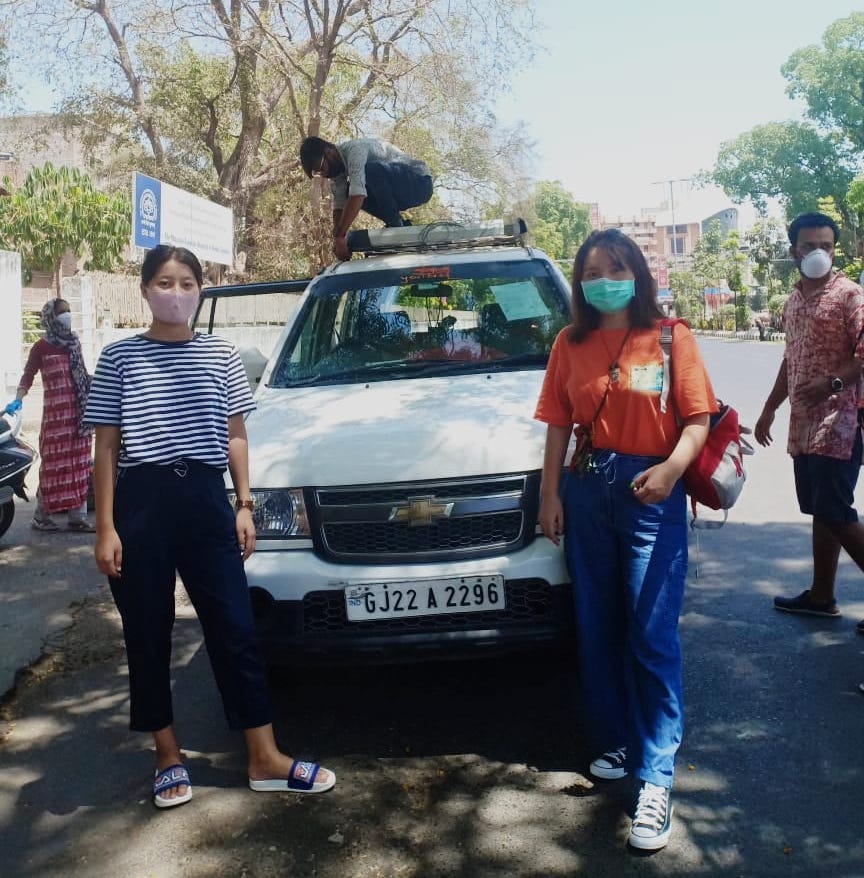 The second batch comprising of two students reached Mainpat, Chattisgarh on 12 May and have been quarantined at the settlement’s quarantine centre. 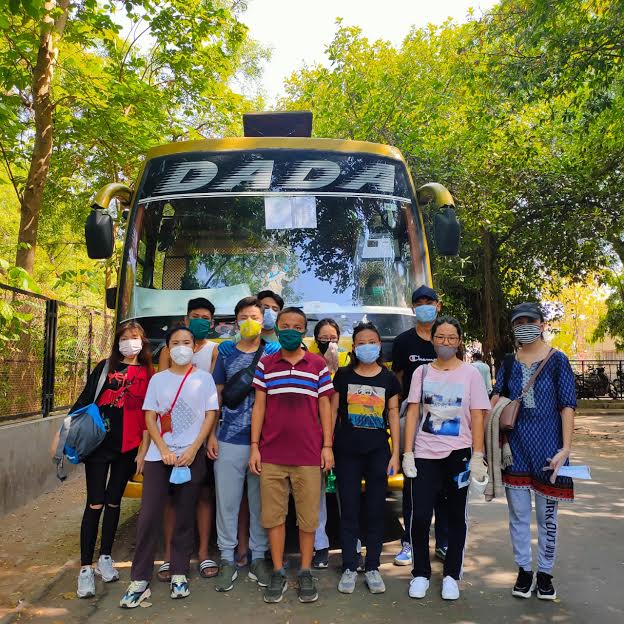 The third batch of 10 students reached Leh, Ladakh on 17 May and have since been home-quarantined. 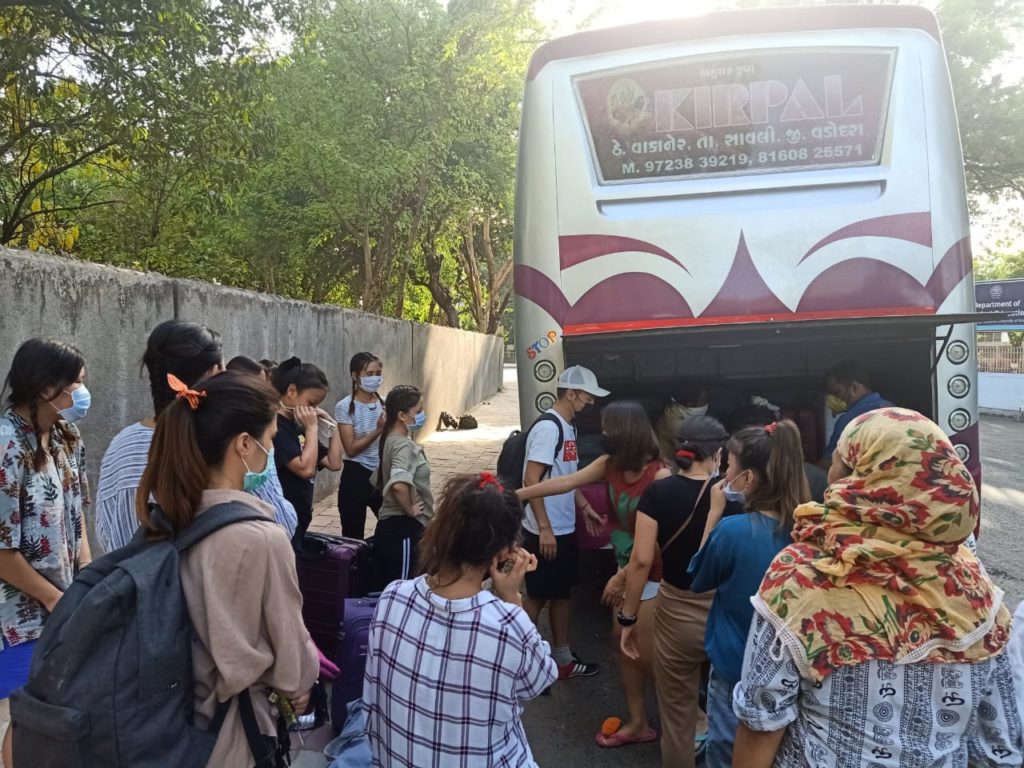 The fourth batch of 27 students reached their hometowns in Arunachal Pradesh on 18 May.

-Filed with inputs from DOE