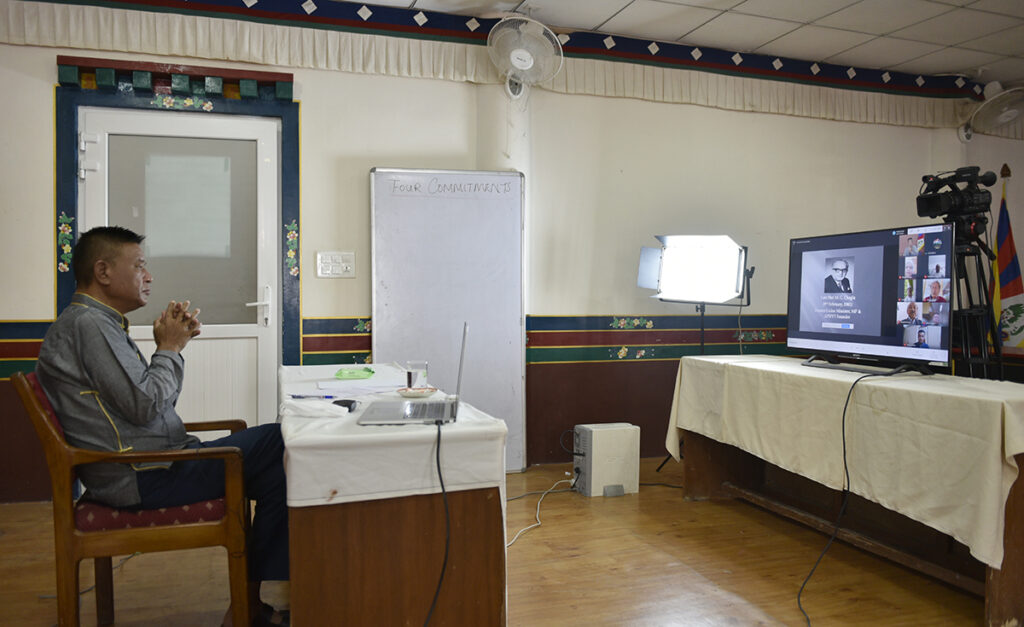 The purpose of the meeting was to formally extend the greetings of all the CGTC-I members and deliberate on expected outcomes, areas of progress, and result orientation in the upcoming activities and overall an appraisal of the core group functions.

Following this, the members presented a photo screening honouring all the distinguished Members who have laid the foundation for Tibbat Mukti Sadhana and kept its flame burning as they handed it down to the present bearers.

Shri R. K. Khrimey, National Convener of CGTC-I in his address formally congratulated Hon. Sikyong Shri Penpa Tsering. He admired the wisdom of the Tibetan People for electing a worthy person who had acquired both the knowledge of the political framework and the administrative functioning of CTA.

Shri Khrimey revisited Core Group’s previous works, how far it had achieved, failures during the ventures and reconsolidation where it required. He said it is the sole wish of every Indian people that Tibet shall see the light of freedom during the lifetime of His Holiness the 14th Dalai Lama and His Holiness shall return proudly to Tibet.

Next, Shri Surendra Kumar, National Co-Convener for Eastern Region, greeted Honorable Sikyong and sought his guidance in the Action Plans of the Members of Core Group keeping in mind the current pandemic scenario.

Shri Arvind Nikose, National Co-Convener for Western Region stressed the need to focus more upon practical methodology that hinders the interest of the Chinese Communist Party, citing the campaign of ‘Boycott Chinese Goods’.

Shri Amruth Joshi, National Co-Convener for Southern Region, expressed his double joy for Tibetans having an able leader elected as Sikyong and a leader who also hails from his home state Karnataka.

Shri Joshi reminded the vision and words of Prof. Samdhong Rinpoche that he noted ‘should reflect in the strategy while discharging respective assignments’.

In his remarks, Honorable Sikyong Shri Penpa Tsering expressed his gratitude for the kind felicitation extended by the CGTC-I members.

In particular, he thanked them for constantly showing faith and support for the Tibetan cause as he commended their years of nationwide advocacy on Tibet.

In addition, Sikyong presented the challenges and priorities that lie ahead in his service for Tibetan people under the spiritual guidance of His Holiness the Dalai Lama. He reiterated his leadership commitments that include resuming the stalled dialogue with the Chinese government, harnessing the potentials of young Tibetan diaspora spread across 25 countries in drumming up the global Tibet advocacy.

He reminded the Members of the Core Group that time is critical and together, they must push every effort to expedite the resolution of the long-standing sino-Tibet conflict.