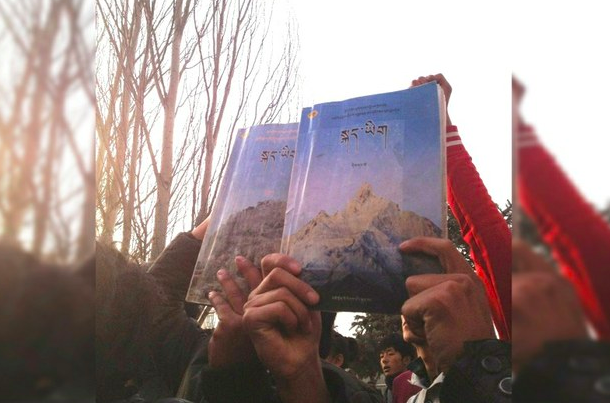 Instruction in Tibetan classrooms in Sichuan’s Ngaba prefecture will soon be given exclusively in Chinese, with the students’ mother tongue used only in special classes teaching Tibetan as a language, sources in Ngaba say of an issue that has emerged as a major sore point among Tibetans.

The move comes as schools in the neighboring Tibet Autonomous Region have begun teaching mainly in Chinese in what authorities say is an effort to facilitate participation in China’s modern economy, but what rights groups have called a campaign to destroy the cultural identity of Tibetan schoolchildren.

“A few days ago, we received a notice that the schools would reopen, and my wife attended a meeting called by school officials. On returning home, she said that beginning this summer the medium of school instruction will be switched entirely to Chinese,” Nyidang said.

“Tibetan will still be taught, but only in language classes,” Nyidang said, adding, “A document to this effect will be issued shortly.”

“When I heard this, I couldn’t believe it and felt anxious, and in a panic, I asked a number of sources if this news was true, and they confirmed that it was.”

“The Tibetan people have the law on their side in this case, and they should come together without fear from all levels of society to protest and demand that the order be repealed,” he said.

A violation of the law

“At staff and teachers meetings when the schools reopened at the beginning of April, school authorities announced that upper-level managers had decided that the medium of instruction would be changed,” he said.

In Phase 1 ending at the close of the year, instruction in Tibetan will be gradually eliminated in Tibetan primary and middle schools, with instruction increasingly given in Chinese in the following Phase 2, Jambe said.

“Even though many people have voiced doubts that this will happen, there is no doubt at all that reports of the policy change are true,” he said. “The change was clearly announced at a staff meeting by school authorities, so how can there be any question about this?”

If implemented, the change would violate provisions of regional laws guaranteeing ethnic rights, however, “and the order may not have come from China’s central government but from provincial officials,” Jambe said.

Speaking to RFA’s Tibetan Service, a Ngaba resident confirmed that the new policy had been announced at a school staff meeting.

“But no one has seen any written policy document yet. Probably it is just a policy known only within inner circles that have not been publicly released,” the source said, speaking on condition of anonymity.

“But a change like this violates China’s Regional Ethnic Autonomy Law, which guarantees numerous rights to minorities, including the freedom to use and develop their own languages, religions, and cultures,” he said.

“If higher authorities don’t reconsider this step, there will be a lot of dissatisfaction and disappointment within the Tibetan community that will lead to a wider discussion and sharing of opposing views on these issues,” he said.

A pattern of pressure

Meanwhile, a March 5, 2020 report by Human Rights Watch details a growing emphasis on Chinese-language schooling in Tibet, calling the trend “an assimilationist policy for minorities that has gained momentum under President Xi Jinping’s leadership.”

Drawn from interviews conducted in September 2019 with Tibetan parents and teachers in six rural townships in the Nagchu municipality in the Tibet Autonomous Region, the 91-page report reveals a pattern of pressure on local schools to give preference to classroom instruction in Chinese, even at the kindergarten level.

Thousands of non-Tibetan speaking teachers have now been hired from other parts of China to teach in Tibetan areas, with ethnically mixed classes promoted in the name of the unity of China’s “nationalities,” HRW says in its report.