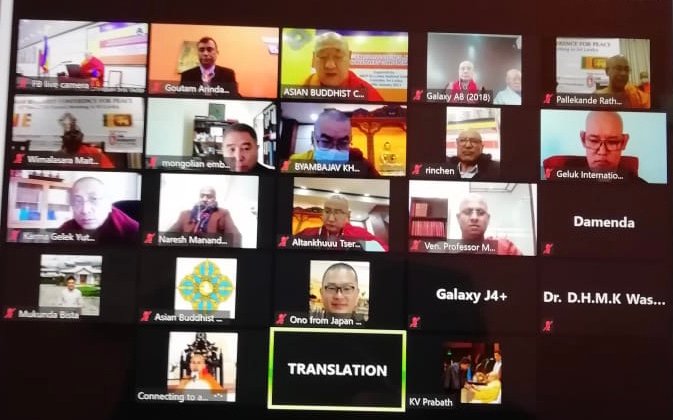 During the inauguration ceremony, video messages of His Holiness the Dalai Lama and dignitaries from other national centres were screened. Kalon Karma Gelek Yuthok, head of Tibetan national centre of ABCP delivered a speech at the meeting.

Most Honourable President and Vice-Presidents of Asian Buddhist Conference for Peace (ABCP),

Venerable Members of the Sangha,

Respected Fellow Leaders and Representatives of the ABCP National Centres,

I would first of all like to offer my warmest greetings to you all on behalf of the Department of Religion and Culture of the Central Tibetan Administration (CTA), Dharamsala, India and more importantly on behalf of all Tibetan Buddhists around the world.

I would also like to felicitate the ABCP Headquarters and the Sri Lanka National Centres of ABCP on having organized and hosted this virtual Executive Council Meeting of ABCP in spite of a horrific global pandemic.

I am very pleased and honoured to be with you virtually and to briefly share the thought and experience of my National Centre on the common Buddhist cause and the specific objectives of ABCP over the past few years. I see our meeting together at this juncture as extremely important – irrespective of whether it was previously scheduled or not. I don’t need to elaborate it any further.

Ever since the rejuvenation of ABCP in 2017 at New Delhi, India and the 11th General Assembly of ABCP in 2019 at Ulaanbaatar, Mongolia, we have successfully reorganized ourselves as Asian Buddhists under the banner of ABCP with a new spirit and commitment. However, it has remained very clear over the past decade that mere coming back in name and ceremonies would mean very little. We therefore need to upgrade and intensify our efforts at least by ten folds with necessary transformations in thought as well as in action to make ourselves relevant and effective in our time. Here, to me it appears that we should first deeply contemplate on Three Fundamental Causes and then carefully interrelate them. The three fundamental causes I have just referred to are: (i) the Cause of the Globe, (ii) the Cause of the Buddha Dharma, and (iii) the Cause of the Buddhists. The rest would follow by itself.

Towards that direction I am happy to report some key activities carried out by the leaders and units associated with my National Centre over the past two years.

1. Our supreme spiritual leader His Holiness the Great XIV Dalai Lama has been actively engaged in a chain of virtual or otherwise global interactive events, including traditional teachings, discourses and dialogues, during which he spoke on solution of the current world problems through non-violence, compassion and dialogue; promotion of human values and ethics; promotion of religious harmony and unity; promotion of Buddhist principles and culture; protection of the global natural environments – particularly those of the Tibetan Plateau and Himalayan Region; and revival and promotion of the great tradition of learning and practice as followed by the ancient Nalanda Buddhist University of India.

2. Other eminent Tibetan Buddhist leaders of different traditional schools have also remained actively engaged virtually or otherwise in similar global and public events and have greatly contributed materially, mentally and spiritually in facing the sufferings and problems brought out by the Covid-19 pandemic. As advised by His Holiness the Dalai Lama and other leading eminent Tibetan Lamas, the Tibetan monasteries and nunneries around the world have performed hundreds and thousands of prayers and rituals in purification and pacification of the global pandemic, which according to Buddhist sources is known to have arisen out of extreme human negative thoughts and actions against the fellow living creatures and their natural habitats.

3. As specifically said in the Communique of 11th General Assembly, our National Centre has been given the charge to look after the Standing Commission for Promotion of Buddhist Ethics and Unity. Ever since His Holiness the Dalai Lama announced his ‘Three Personal Commitments’ some 20 years ago, the Central Tibetan Administration became closely involved in all educational and religious programs on promotion of ‘Human Ethics’ and ‘Religious Harmony’. When CTA organized a week-long global online seminar of over 120 scholars and experts from around the world on the Four Principal Commitments of His Holiness the Dalai Lama in December, 2020, over 30 Buddhist masters, including the heads of the traditional Tibetan Buddhist and Bon schools, spoke on promotion of Buddhist ethics and unity.

4. Many Tibetan Buddhist centres and cultural institutions are running various academic courses in Buddhist studies and thus promoting the Buddhist thoughts and values through education.

5. In November 2019, we had successfully organized the 14th Tibetan Religious Conference which was attended by 116 delegates, including the Heads of the Tibetan Buddhist and Bon Schools and some eminent Buddhist leaders from the Himalayan regions of India. His Holiness the Dalai Lama graced the event on the final day. A historic and important event that had taken place on the very first day of the conference was a three-point unanimous resolution on the future status of the Institution and Reincarnation of the Dalai Lama. I felt that I should formally report it to the ABCP on the occasion of this meeting. The three points of the resolution were:

Besides the current critical status of religious freedom in Tibet, the Chinese government has lately framed a new set of rules and regulations for recognizing the reincarnation of high Tibetan Lamas, including the Dalai Lama. Considering these gross anti-Buddhist developments, I would like to call upon the ABCP as an important guardian of the Buddhist teachings and systems to express its concern and lead support activities and resolutions in favour of religious freedom in Tibet and other regions in Asia. With this note I would like to conclude my speech.

May the great cause of the Buddha Dharma to eliminate the ignorance and sufferings of all living beings be spontaneously accomplished and may you all be happy and successful. Thank you all very much.

-Filed by Department of Religion and Culture, CTA 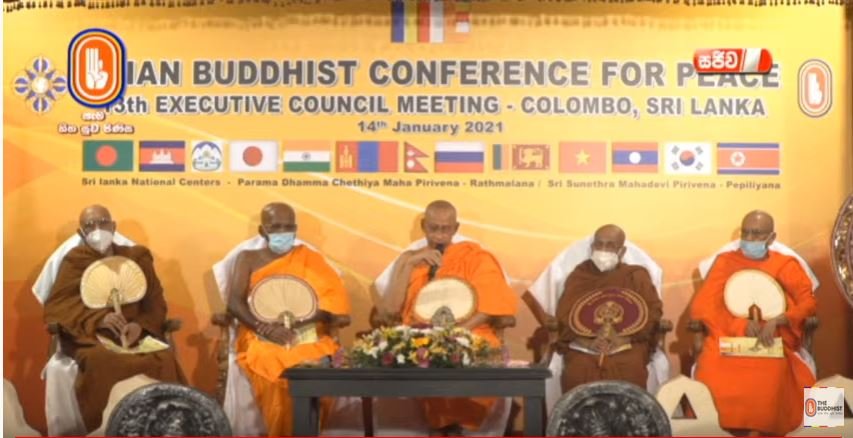