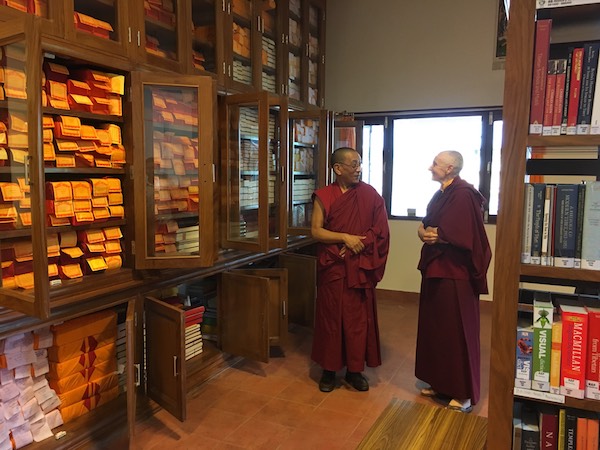 Kalon Karma Gelek Yuthok of Department of Religion and Culture, Central Tibetan Administration returned to Dharamsala yesterday evening after successfully completing his official tour to visit Tibetan monasteries located in Gopalpur, Tashi Jong and Tsopema. This visit was continuation of Chorig Kalon’s official inspection to the Tibetan Cultural centers and monastic institutions under this department.

On September 7, morning Kalon visited Dorzong Monastery, near Gopalpur.  He was welcomed by secretary and incharge monk of the monastery. Both of them briefed him about their monastery and then accompanied him to take tour around prayer hall, stupas and office.  As the schedule arranged earlier, Kalon visited Dongyu Gatsel Ling Nunnery located near Tashi Jong. On his arrival, Kalon was received by Director Nun Tenzin Palmo, the author of “Cave in the Snow”, and other nuns. After briefly reported about their monastery by the director, Kalon took an inspection in monastery’s prayer hall, Kitchen, hostel, office and classrooms of various divisions. Kalon then left for Tashi Jong and paid a visit to Pal Phuntsok Choekhor Ling Monastery. Settlement officer and Khenpo of the monastery welcomed him and briefly reported the present status of the monastery followed by accompanying him to take tour to monastery and its study center where more the 300 monks having practice Tibetan Buddhism currently.

After having lunch which was served by Pal Phuntsok Ling, Kalon left for Rewalsar (Tso Pema) where around five monasteries and nunneries of various schools of Tibetan Buddhism located. Kalon Karma Gelek Yuthok was warmly received by Mandi Tibetan Settlement officer, Local chief justice commissioner and representatives of the monasteries.  In the evening, after taking short rest, Kalon visited Drukpa Kagyu Monastery and Zigar Gonpa with accompanied by settlement officer and Khenpo.  Before heading back to room at Sangdok Palri monastery, Kalon visited Pedma Sambawa Public Library as requested by them. The Library was established in 2016 which facilitate school kids, monks and nuns to study English and Tibetan Buddhism during their free time and also borrow books.

On September 8, Kalon visited Sangdok Palri, Ugyen Heru Gon, Utse Retroe Nunnery and Guru Cave.  After having short conversations with Khenpo or incharge monk of the respective monasteries on various issues with regard to administration and so on, Kalon took a tour around office, assembly hall, classrooms and hostel etc. Kalon also paid a greet to Drupwang Wangchuk Dorjee Rinpoche before leaving for Dharamsala.

During his visit to the monastic institutions, Kalon offered a veneration and tea (Nyinkur and Mangja) to the monks / nuns and expressed his sincere appreciation for them to devote their life for taking care of monastery and studying Tibetan Buddhism. He also raised concern on consistently reducing number of monks and nuns  and urged Khenpo and administration head of the monasteries to try to find a concrete solution for making kids monks and nuns to take core interest in learning Tibetan Buddhism once they grownup.

So far, Kalon had paid a greeting to all the spiritual heads of Tibetan Buddhism and Bon Tradition as well as officially visited to the most of monastic institutions of Tibetan Buddhism. He will be visiting soon the monasteries and nunneries located in Dharamsala.

– Report filed by Department of Religion and Culture – 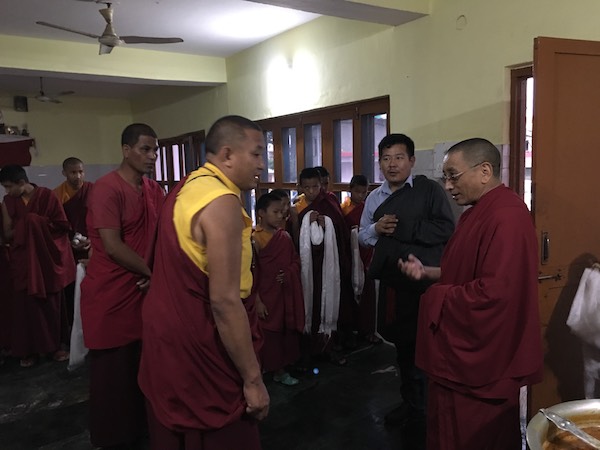 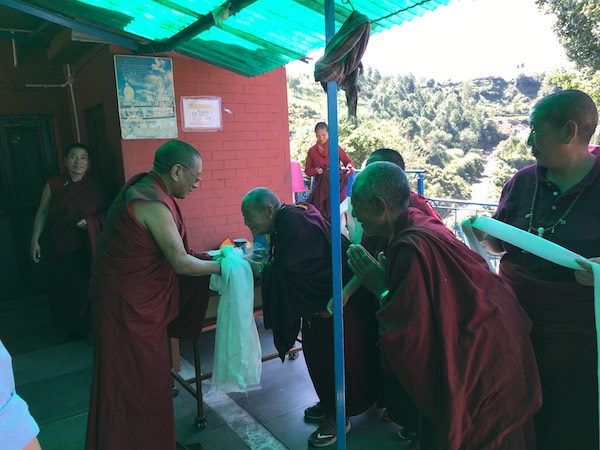