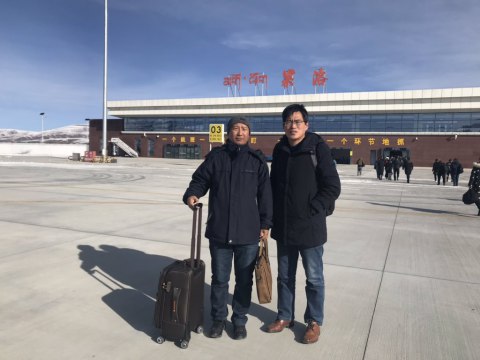 A Tibetan nomad and community activist in Tibet’s Golog region A-nya Sengdra was sentenced to 7 years prison term after a sham trial by the Chinese court in Golog Prefecture, Amdo, eastern Tibet.

On 6 December 2019, A-nya Sengdra, a Tibetan environment, and anti-corruption activist was sentenced after he was falsely charged for “gathering people to disturb social order” and “picking quarrels and provoking troubles.”

Mr. A-nya Sengdra is a widely known and respected environment and anti-corruption activist in his community for his campaign work against illegal mining activities and the Chinese government’s officials’ corruption. For instance, in 2014 A-nya formed a voluntary organisation called ‘Mang Dhon Ling’ (Public Affairs Forum) along with his friend to discuss and fight against these issues.

A-nya was arrested on 4 September 2018 by security forces in Gade (Ch: Gande) County and was detained for almost 14 months before he was tried earlier this month. During his long detention period, A-nya was severely tortured and denied access to a lawyer for several weeks.  Moreover, his detention period was extended several times and a request from his lawyer for his bail in January this year was rejected. The local Chinese authorities took much time in pretrial detention cooking up false charges against A-nya Sengdra and the other local Tibetans detained.

Before A-nya Sengdra’s detention in September last year, over 200 local Tibetans had supported A-nya Sengdra’s campaign to file a petition to the Provincial Discipline and Inspection Bureau against the embezzlement of poverty alleviation funds by the local authorities in various townships including A-nya’s hometown Kyangche.

In August this year, the Provincial Discipline and Inspection Bureau dismissed local government officials who have ignored the embezzlement of poverty alleviation funds in Gade County.

According to TCHRD, “the local state media reported on the dismissal of Lu Xuhui, the Party Secretary of Tsangkor Sholma Township, Gonpo, head of the Township government, Drungchoe Tsering, director of the Gade County Poverty Alleviation Bureau for building standardised housing for 135 families living in Kyangche and other townships. Yang Jinfeng, the Gade County government’s deputy magistrate was also dismissed and given stern warnings.”

The above-mentioned dismissal of local government officials was a straight outcome of A-nya’s years of the campaign against corruption. It is evident that A-nya Sengdra and other local Tibetans were illegally imprisoned and sentenced for their successful campaign work and voicing out their displeasure at the corruption committed by the local government officials in the region.

“This grievous incident is yet another stark reminder to the international community that China continues to violate human rights of the Tibetans in Tibet,”  remarked International Relations Secretary Karma Choeying, DIIR, CTA. He further noted that Tibetans in Tibet continue to resist and suffer as a result despite tall claims by the Chinese government of how Tibetans are treated equally and leading a “harmonious” life in Tibet.

The Chinese government’s relentless efforts to manipulate its own laws to criminalise the local Tibetan activists and human rights defenders in Tibet continues unabated. The 6 December verdict is primarily to silence dissent and crush anti-corruption campaigns at the grass-root level.